The Simulation Theory of Consciousness by Donald Firesmith Book Tour and Giveaway :) 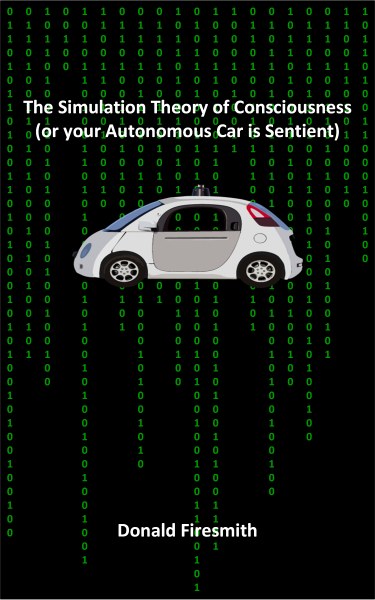 The Simulation Theory of Consciousness
(or Your Autonomous Car is Sentient)
by Donald Firesmith
Genre: Speculative Non-Fiction

Have you ever wondered what our robots might be thinking? What do our cars experience as they use their sensors to observe the world around them and increasingly take over our driving duties? When we play computer games, are we the only ones who experience the simulated virtual worlds they create? More generally, are our computer-driven creations sentient with their own internal, subjective streams of conscious?

Named a distinguished engineer by the Association of Computing Machinery, Donald Firesmith uses his 40 years of experience developing complex, software-intensive systems to argue that the answer is yes. The many functional analogies between humans and cyber-physical systems produce a strong argument that every software-reliant physical system that creates a real-time simulation of itself and its environment is consciously aware of that simulation. Just as neuroscientists study consciousness in terms of the neural correlates of consciousness (NCC), software and system engineers will study artificial consciousness in terms of the corresponding cyber correlates of consciousness (CCC).

The consciousness of our creations is not just an issue for engineers and academics. As our cyber-physical systems become more intelligent and pervasive, it is time for all of us to consider the social, ethical, and legal ramifications of their intelligence. To do less could have dire consequences.