The Road to Kalbakar Wyrms of Pasandir Book 1 by Paul E. Horsman Book Tour and Giveaway :) 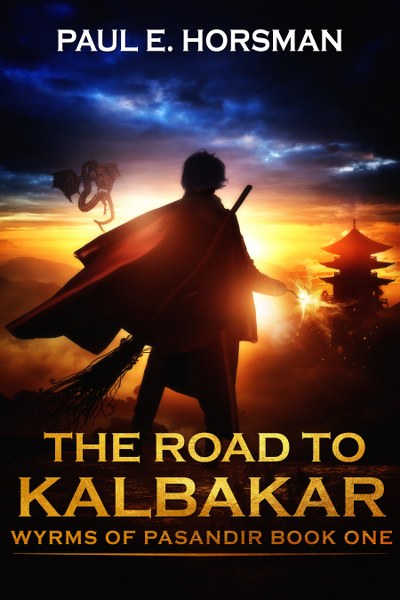 Seventeen-year-old Eskandar is the lowest of the low among the crew of the Navy sloop Tipred. As ship's boy, he runs messages, gets the dirtiest jobs and tries to stay out of his betters' way. It is a dull but safe life, for the tired old Tipred patrols a shipping lane to nowhere and nothing ever happens to disturb their peace.
None aboard know Eskandar's big secret. For he is not alone. In his head lives the voice of Teodar, who has guided and guarded him all his life, and who is teaching him magic. Teodar is a mystery; he won't say who he is or why he is helping him. Eskandar has stopped asking; the voice is his only friend, and that is all that matters to him.
Life goes on placidly - until the sea monsters appear. To save himself and his ship, Eskandar has to use his secret magic and manages to defeat the monsters. Now his enemies know him and his humdrum life becomes a maelstrom of action - fighting monsters, desert robbers and even more fearful enemies.
Will Eskandar's barely tested powers be enough against an undead necromancer who wants him killed? And what about those mighty wyrms in the sky, are they friend or foe? Follow Eskandar's adventures as he gathers a strange band of companions in his battle against terrible enemies in The Road to Kalbakar, Book One of Wyrms of Pasandir.
Note: This series is the next-generation sequel to Lioness of Kell.
Add to Goodreads
Amazon* Apple* B&N* Google* Kobo* Smashwords 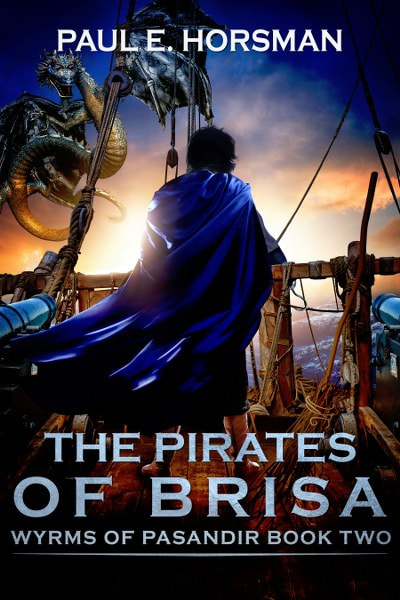 The Pirates of Brisa
Wyrms of Pasandir Book 2
228 pages

When young Eskandar leaves his ship with the tough broomrider girl Kellani, he has no idea how much his dull life in the navy is about to change.
Being chased by desert robbers, delving through ancient tombs, fighting mighty jinn and liberating Kalbakar Keep makes him aware of his past – and his future.
He is a Wyrmcaller; a person of great magic, a speaker with wyrms, and the defender of Bodrus the Sleeping God. Quite a change for a one-handed seventeen-year-old, five-feet-plus ship’s boy.
And that’s not all; an ancient lich lord with an army of mad minions, aided by the jinn and a bunch of pirates, threaten the Sleeping God’s safety. As Bodrus’ defender, Eskandar is the one to foil their plans. But for that he needs an army. An army of kids...
Follow Eskandar and his friends in The Pirates of Brisa, Book 2 of Wyrms of Pasandir, a grand fantasy adventure in a world of wyrms, steamships, magic and mayhem!
Add to Goodreads
Amazon* Apple* B&N* Google* Kobo* Smashwords 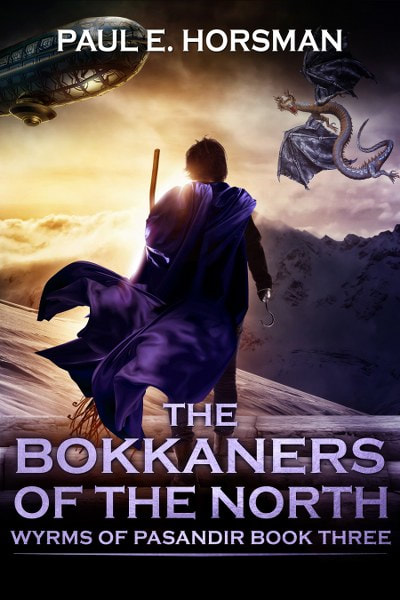 Against all odds, Eskandar and his bunch of ragtag youngsters have managed to capture a powerful Qoori fourmaster warship, and used her cannons to blow up the pirate harbor of Brisa. Victory!
But his enemies won’t give the young wyrmcaller time to bask in the glory of a job well done, and soon the voice of Teodar in his head summons him north, where new and even more powerful pirates create havoc on the seas.
Two thousand miles north... that means finding a new base for his army of kids. Teodar sends them by airship to Smalkand, a deserted cave system on the coast of their own Pasandir Peaks. On arrival, Eskandar and his companions discover their new home harbors some surprises...
Once inside Smalkand Keep, and with his main force in the ships still days away, Eskandar and his small group find themselves under attack from Bokkaners and other minions of their ultimate nemesis, the lich lord.
New adventures in the mighty, snowcapped Peaks, at sea, and in the rich lands of the Hizmyran kingdom await our heroes in ‘The Bokkaners of the North’, the third book of Wyrms of Pasandir.
Add to Goodreads
Amazon* Apple* B&N* Google* Kobo* Smashwords 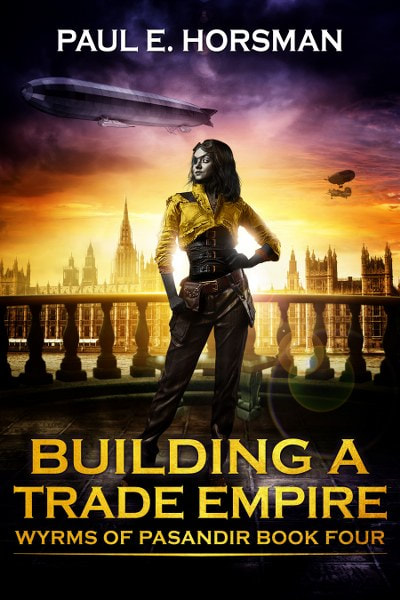 SHAW: A GIRL’S GOAL TO BECOME A WEALTHY MERCHANT
Trade had been Shaw’s life, her dream, her future – until a terrible fire destroyed her parents and their business. Now the 15-year-old orphan follows the wyrmcaller, using her mercantile genius to sell his honestly gained loot and finance his battle against pirates and jinn.
When Wyrmcaller Eskandar leaves for the north, she gets the chance to branch out. A large cargo of confiscated foreign goodies brings in much more gold than she had expected, and with that money she opens her first trade center.
Armed with her inborn stubbornness and her fire-hardened will to become a powerful trader, she dives into the business world of the Weal Nations; battling scheming financiers and protecting the rights of the people she employs.
Aided by Nate, the only true love in her life, she fights her enemies on land and at sea, conquering pirate vessels, islands and important companies on her way to become a rich and powerful High Merchant.
Add to Goodreads
Amazon* Apple* B&N* Google* Kobo* Smashwords 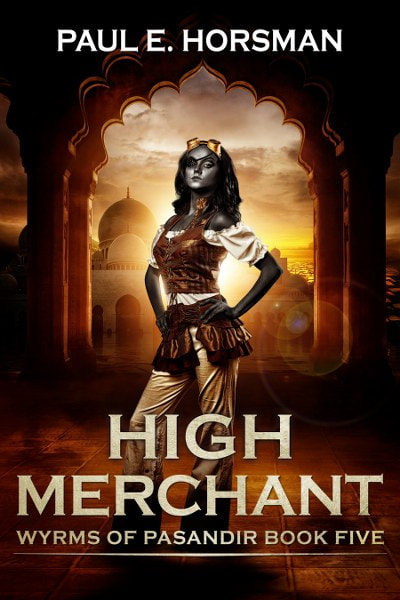 Fifteen-year-old Shaw is already at the head of a fast-growing transnational business. With the acquisition of the great WyDir airlines company, she became a power in the lands of the Weal, and now she is ready to expand.
She manages to get an airship concession from the king of Hizmyr, a large and rich country to the north. This brings her into conflict with the local guilds, who have a monopoly on all businesses in that kingdom.
The Guilds of Hizmyr are ruthless and go to any length to maintain their hold over the king. Soon, Shaw finds herself embroiled in a battle demanding all her grit and ingenuity to win.
Meanwhile the populace, fed up with their poverty, is on the brink of rebellion. To save her plans, Shaw must not only defeat the guilds, she must prevent a civil war as well!
Add to Goodreads
Amazon* Apple* B&N* Google* Kobo * Smashwords 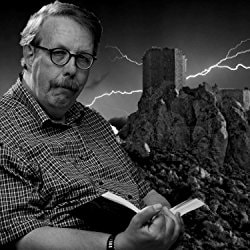 Paul E. Horsman is a Dutch and international Fantasy author.
Born in Bussum, a quiet little suburbal village in the Netherlands (1952), he now lives in Roosendaal, a town near the Belgian border.
After finishing school and doing a stint in the army in tropical Surinam, he served for thirty years as a Scoutmaster. Professionally, he earned his bread in various business capacities.
From 1995 to 2012 he was an instructor at a large educational institution - where he explained to foreigners the wonders of the Dutch language and customs - until Governmental budget cuts terminated both the school and his job.
Since then is Horsman a full-time fantasy author.
His first three Dutch books have been trade published in The Netherlands by Zilverspoor.
His English books and later Dutch books are self-published under the Red Rune Books label and appear at Amazon and many major on-line bookstores, both in print and e-book.
His tales are a mixture of high fantasy, mythology and steampunk, and are characterized by their positive mood. Equality and friendship, courage and determination, humor and growth form some of the colors with which Horsman paints his stories. His worlds and their peoples are diverse and full of adventure. And behind it all there is always that dusty scent of old death so characteristic of dungeons, and the smell of dragons, kobolds or other denizens of other worlds.
Website* Facebook * Twitter * Amazon* Goodreads