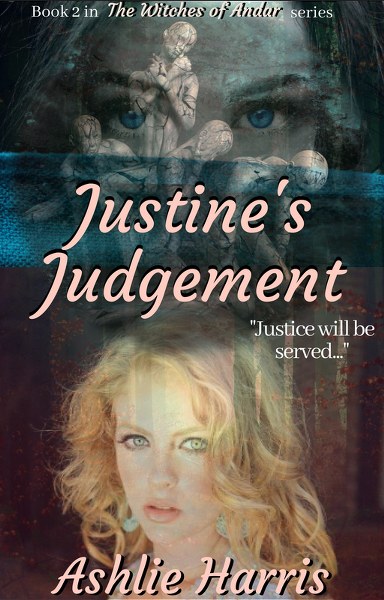 Justine’s Judgement is the second installment in a brand new Fantasy series by Ashlie Harris. The first book, which bears the same name as the series itself, is entitled The Witches of Andar and was released January 1st, 2018.

In this sequel to TWoA, Justine and her friends, Alice and Malinda, are once again fighting back against the evil Duke Ebrius. Evading and outwitting him at every turn, the witches team up with some very colorful characters along the way. There’s Jaicor, Malinda’s cousin and helpful aid to the witches in the early part of their journey. Jaicor’s wife, Marcine, is a delight, as well. Their witty banter is a heart-warming sight to the three travel-weary women.

Later, the group encounters, Jaicor’s markethand, Olendian, and continues on to meet Malinda’s other cousin, Jaicor’s sister, Lady Luleth. Lady Luleth’s husband, Lord Kelton and Jehren, a member of their staff decide to help Malinda, Alice, and Justine when they come to Crippen Manor looking for allies. While devising a plan to defeat the Duke, Justine befriends a guest staying at the Manor. She is Eleyna, a mysterious and beautiful woman who quickly becomes a close confidant and ally. Though Justine and Eleyna form a fast bond, Eleyna’s motives may not be as pure as she portends. Uncovering secret pasts and unrecognized ancestries, not a soul will be left unchanged by the events about to take place. In the end, the witches and their friends will work together to bring down the greatest evil to ever threaten the land of Andar!

The book cover was nominated for the AllAuthor.com Cover Contest for September!!
Please support the author and vote HERE!

There was an unidentifiable part of her that was missing. And it was essential to being a true An-Kishar witch. She vaguely wondered, through her heartache and temporary stupefaction, what that might mean. And, for the first time in a long time, she wasn’t sure what she believed.
****
The thick boughs immersed the witches in dark shadows and Malinda stopped, closed her eyes and concentrated. She whispered an incantation, “Pila Luminis,” and a small, glimmering light appeared to surround the aged enchantress, growing in its size and intensity by the second.
****
Justine, in her never-ending curiosity, pulled the dusty book from its cubby and began flipping gingerly through the pages. The ancient novel contained pictures and stories regarding the Gods and Goddess of the Old World. It had been many years since Malinda had seen one of these books and the images brought back many memories from her childhood. Her mother, reading these stories to her before bed, would tell them with such intensity that Malinda nearly believed them to be true and, to this day, still hadn’t fully discounted the possibility. After all, the An-Kishar had to have come from somewhere. Justine had flipped through nearly the entire book before stopping on one page in
particular. “Look!” she said, jumping up and thrusting the book toward Malinda and Alice, “Someone’s written something, here in the margin.” She flipped the book back around and squinted, trying to read the minuscule scratches, “I can’t make it out,” she said, “It looks like someone was trying to find the site of the Anustians, though!” Malinda was amused at Justine’s bewilderment. “Oh, child,” said the old witch with a hearty chuckle, “Many people have tried, and failed, to locate the original site of the Anustians. It is not surprising to me that Jaicor would have such a tome in his house. He, too, was told the stories as a child. It is part of the An-Kishar legacy.” “Well, I’ve only ever heard bits and pieces through you,” replied Justine, “I’m going to ask Jaicor if he’d mind me borrowing this book while we’re here.” 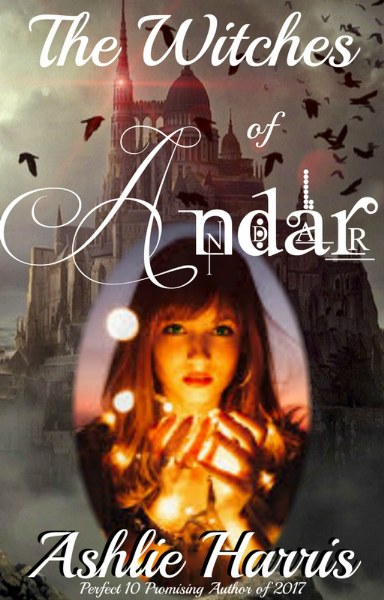 A trio of An-Kishar witches has unwittingly become involved in a royal coup. After saving the murdered king's son, the foursome takes shelter with a traveling theater troupe, hoping to stay in hiding until the Prince is able to reclaim his throne.

Fight alongside Malinda, Alice, and Justine to rid the kingdom of the dark magic that threatens to run rampant. Venture into the Hanging Ferns Forest, travel with the Thespian Connection, and help unravel the mysteries that lie within the realm of Andar!

Raising their hands, they shouted in unison, “Scuto socio!" A
great, golden flash erupted from their palms, drawing
everyone's attention from the drama unfolding between
Justine, Prince Gregdan, and the Duke/King. The crowd
dispersed upon seeing the witches in action. Most feared the
unknown forces behind their magic and others could simply
sense the impending doom.
The shimmering shield spread it’s translucent tendrils until it
was completely encircling all three women. The Prince,
however, seemed to be just out of the spell’s reach. Muttering
another incantation, Malinda nodded her head and the
remaining guards dropped to the ground, completely
paralyzed. Justine, now free of the guards, made a break for
the Prince.
“Stop!” shouted the Duke, red-faced and veins bulging. He
stepped closer to Prince Gregdan so that he was within arms’
reach, and pointed to Justine. “You foolish girl! Do you not
know a losing battle when you’re in the middle of one?”
“The only loser here is you, King Ebrius,” retorted Justine,
filling the title with as much disgust and contempt as she
could muster.
“You would be wise to address me more respectfully, child,”
warned Ebrius. “I may take pity on you yet. I do tend to
prefer a feisty redhead,” he winked and Justine could feel her
stomach churning in response. “Just think,” he said, “like it or
not, I am King. You could be my Queen.”
Being an An-Kishar limited Justine’s knowledge of harmful
spells, but she’d always been good at improvising. She
recalled the incantations she’d been helping Alice transcribe
before their world had been shattered into a million pieces.
Remembering a partial spell, and with more confidence than
she felt, Justine summoned every ounce of her love and anger
and bellowed, “Konfleur aphida!”
Nothing happened and, for a moment, Justine thought she’d
done the spell incorrectly and she feared the consequences if
she had. Just as she began to lose heart, they heard a great
roar. Ebrius, fearing an attack from a large and fearsome
creature, drew his sword, ready to fight. His foe, however,
was not a great beast, but a massive swarm of insects. Every
sort of insect found in the kingdom was present it seemedfrom
the minuscule, crawling Opaci to the intimidating
Vespuns, their black wings, shining in the evening sun. And
their sole intent was to lay siege to the false King. 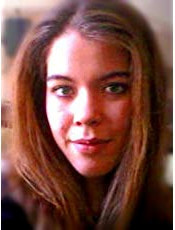 Ashlie Harris is 30 years old and a Stay-at-Home mother of four homeschooled children. She and her husband live in the heart of the Midwest, USA, in a place Ashlie likes to call, "The Land of Corn and Beans". She has lived there all her life but may plan to move North in the near future. A unique childhood and a passion for the written word have served as motivation and inspiration throughout the years. Always the writer, Ashlie can often be found asking inappropriate questions, staring at seemingly nothing for hours on end, and generally being completely socially awkward. Her biggest wish is for people to look past their differences and start treating each other as the one, single race we are- HUMAN.

In addition to The Witches of Andar series (Book 1-Released Jan. 1st, 2018.), Ashlie is also the author of two anthologies- Extra Life & Circles of the Soul- and one flash-fiction horror story, Midnight Monster.