The Rules of Persuasion by Amity Hope Blog Tour with Excerpt and Giveaway :) 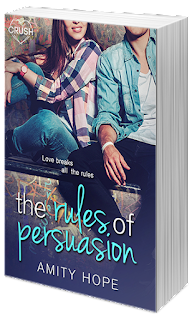 1) Take things slow (her rule)
2) Make it believable (his rule)
After tragedy hit her family, Meg Matthews officially crossed the line from “good girl” to “bad girl.” Motorcycle? Check. Graffiti? Check. The only thing Meg hadn’t planned on was blackmail. Too bad now a certain infuriating boy holds Meg’s future in his hands…
When Luke Prescott—star pitcher and town golden boy—catches Meg vandalizing the school, she’s given two choices: face the consequences or enter into a fake relationship with him to get his parents and his ex off his back.
But as Meg and Luke grow closer, they both realize they’ve been keeping secrets from each other. Their fake relationship might be doomed from the start—if they can’t learn to open up to the one person they never thought they’d trust.
Disclaimer: This Entangled Teen Crush book contains late-night graffiti sessions, flirty baseball lessons, and a never-ending list of relationship rules just made to be broken.
Link to Goodreads:
https://www.goodreads.com/book/show/35674539-the-rules-of-persuasion
Purchase Links:
Amazon| Amazon.com.au| Amazon.co.uk | Amazon.ca| B&N| iBooks| Kobo| Entangled
***EXCERPT***

I flipped the notebook shut and wrangled it into my backpack. “I guess we’re done here.”
“Finally.” Her smile evaporated again. “I guess I’ll see you later.” She slid out of the booth, not waiting for a good-bye.
I yanked a few bills out of my wallet and tossed them on the table to cover the malts with plenty left for a tip. Grabbing my backpack, I darted out of the restaurant.
I didn’t need girls to be falling at my feet. But I wasn’t used to them acting as if I wasn’t worth their time. Meg’s indifference rattled me. As I watched her head to her Rebel—as if she couldn’t get away from me fast enough—I felt the urge to rattle her right back.
“Meg!”
She twisted around slowly.
I sauntered up to her until there were only inches between us. To her credit, she didn’t back down.
“I thought we were done,” she said. Was it my imagination, or did she sound slightly breathless?
“Not quite.”
She cleared her throat and took a step back. I reached for her hands, tangling my fingers around hers as I reeled her back in. “We forgot to seal the deal.”
“Seal the deal?”
“Seal it with a kiss.” I shrugged. “You’re going to have to kiss me eventually. Personally, I’d rather have our first time be without an audience. Wouldn’t you?”
She winced, clearly knowing that I was right.
“I guess it would be best to get the awkwardness out of the way,” she grumbled.
I decided not to focus on the fact that she sounded less than thrilled. Instead, I took it as a good sign that she didn’t elbow me in the gut and storm away.
I moved in slowly, not convinced she wouldn’t bolt. Her eyes fluttered closed. Her hands slid up my arms, clutching at my biceps. When her lips met mine I swear something ignited between us. My hands gripped her waist and as the kiss lingered, the tension melted away.
She had acted so cold toward me, the last thing I expected was for the kiss to be so hot.
AUTHOR INFO: 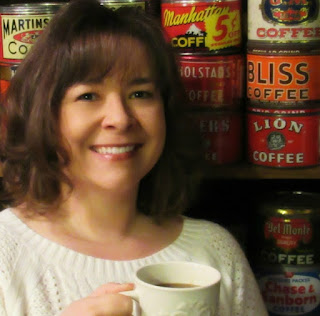 Amity lives in beautiful northern Minnesota with her two sons, two cats and their Rottweiler. She has
a degree in elementary education and worked in that field for ten years before deciding to chase her dream. Her debut novel, Twisted, was listed by Amazon as a Top 100 Kids & Teens Kindle Book of 2012. If she's not writing, or spending time with her boys, she's most likely reading.