Personal Review of The Murderer's Maid by Erika Mailman 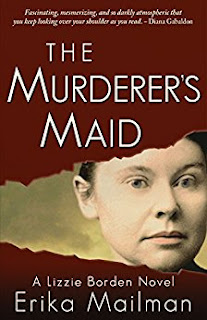 ***Personal Review of The Murderer's
Maid by Erika Mailman***
I am a huge fan of historical fiction - and if you aren't sure what that is, basically it is a genre where the author weaves a fictional tale around historical events.  Such as this novel "The Murderer's Maid" by Erika Mailman.  She has done her homework on the Lizzie Borden case and the historical accuracy of the background and people are great.  I am kind of obsessed with the Lizzie Borden case myself, so when my friend asked if I wanted to read this and review it I didn't hesitate!  If you are not familiar with the Lizzie Borden case, then I would highly recommend you do a little research before reading this, because there are a lot of actual pieces from the case that pop up in the book.  Of course we all know Lizzie was not convicted of the crime but she was never considered innocent.  And Bridget, the maid in the Borden house at the time, most likely could have convicted Lizzie but she didn't.  This novel tells the story from Bridget's point of view - as in how she sees Lizzie and her sister Emma, and the "stories" she hears from other maids who have worked for the Borden's or lived near them.  It's fascinating just as it is, but then Mailman weaves a story about a modern day coffeehouse worker named Brooke who is trying to get along in the world as well as get away from people who are looking for her.  Turns out she is connected to Lizzie Borden, but how?  And why are these men chasing her? Is she perhaps related in some way to the Bordens?  It's very interesting when we find out the truth, and it puts a fire in Brooke's belly.  The one theme that runs very strongly through this novel is that even though Lizzie was acquitted of the murders, she is called "the murderer" and it is assumed that she really did it.
As we see it from Bridget's point of view, Lizzie is a very strange individual - which is in keeping with the stories we have heard about Lizzie's behavior at that time as many people found her very odd.  And even before Bridget hears from the other maids, she sees some strange things and wonders about Lizzie herself.  The difference in the novel that I found is that in the real story, Emma Borden was pretty normal and no one ever really suspected her and she got along well with her step-mother Abigail Borden.  This novel gives us a different perspective to think about - that maybe Emma was not as squeaky clean as everyone thought and maybe she did not have a good relationship with her step-mother either, the only difference being is that she was "normal" to the outside world and Lizzie was not.
Another thing I really enjoyed about this book was the way Mailman made the characters come to life. In the legend, Mrs. Borden was kind of a side character - we never really knew what she was like and never saw her and the girls interacting. But the Mrs. Borden in the book is far more complex, and rather than being painted as the horrible step-mother, she is portrayed in a softer light and truly caring about her step-daughters and husband.  Whether this is true or not - well it is called historical "fiction" for a reason.  We don't know for sure, but I love when they add complexity and life to characters that are historically flat.
Perhaps the most exciting part of this novel is that it starts less than a year before the murders take place, so we see everything leading up to them, and then we are taken on an amazing close-up journey when the murders happen. That was perhaps my favorite part of the book, possibly because it was from Bridget's point of view. Then of course we also see the same evidence as was in the real trial, but we also see that from different points of view, such as what Bridget said to the police after the murders. And then in and out of this murder scene in the future, Brooke is scrambling to read everything she can on the Borden case to find out more. This is about as far as I can go with my review without giving anything away - you have to read the book to find out what happens with both Brooke and Bridget! I can promise you will not be disappointed, this book is a great read and I am thrilled with it :)  Definitely giving this one 5 stars! If you love historical fiction or even just love Lizzie Borden, then you must read this!  Check it out :)
***I was sent a advance complimentary copy of this book to read.  I was not forced nor required to leave a review, this is of my own accord.***

“Erika Mailman writes a page turner of a thriller that will fascinate as well as terrify.”
―Margaret Lane, New York Journal of Books

Fascinating, mesmerizing, and so darkly atmospheric that you keep looking over your shoulder as you read.
―Diana Gabaldon, internationally-bestselling author of the Outlander series

The Murderer’s Maid is a fascinating and deeply chilling tale. Erika Mailman weaves a story that is by turns poignant, compelling, and murderously suspenseful.
―Kathleen Kent, author of The Heretic’s Daughter

Erika Mailman is the author of The Witch's Trinity, a San Francisco Chronicle Notable Book and Bram Stoker Award finalist, and Woman of Ill Fame, a Pushcart Press Editor's Book Award nominee. She's a Yaddo fellow and lives in Northern California with her family.
www.erikamailman.com | www.amazon.com/Erika-Mailman
Thank you to Once Upon A Book for allowing me to read this and join the crew!
Blog Books