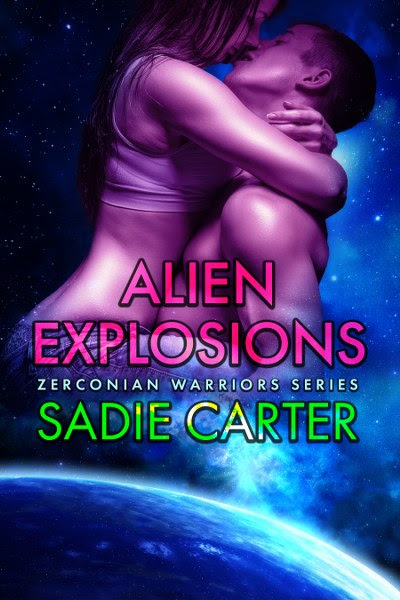 Sometimes it’s a very fine line between love and hate.
Humans were inferior and troublesome creatures, and unlike his fellow warriors, Moroco had no intention of ever mating one.
Trust a female again? Never. Not when he knew how easily they could betray you.
So why did he care so much about a certain prickly, irritating female who seemed to take great delight in rousing his temper?
And his need.
Saffron hadn’t come to Zerconia to find a mate among these overbearing, overprotective aliens. All she cared about was keeping her sister safe, and now that Sophie had found her mate, well, it was probably time to leave.
Except, she couldn’t leave without seeing Moroco once more.
If only to tell him exactly what she thought of him. Only problem was she didn’t know whether she was going to tell him that she disliked him…
Or desired him.
Goodreads* Amazon

He frowned as he saw the way she pulled at that undergarment thing she wore. The one that covered her breasts from him.
“Is there something wrong with your breasts?”
She stilled, looking at him in shock. “No, they’re fine.”
He raised his eyebrows.
“Fine, my bra is just chafing a bit. But then what isn’t?”
“Take your top off.”
“Um, Moroco, listen, I’m sure you’re feeling horny too, but now really isn’t the time to get down and dirty. Because you know, I’m actuallydirty. And I smell. And I’m chafing in places I don’t want to think about. Now I know why all women seem to want a thigh gap—it’s to stop the chafing when they walk too much. Ouch.”
He stared down at the dirt. “Why would anyone wish to get down and dirty?”
A blush filled her cheeks, surprising him. The only time she ever grew embarrassed was when they were talking about joining. “You thought I wished to join with you?”
“You needn’t look so horrified,” she muttered. She wrapped her arms around herself, giving him a defensive look. “I get that I’m not looking my best but you’re the one who is under the delusion we’re mates. Isn’t that what mates do?”
“We are mates. There is no delusion.” He gripped her chin, holding it firmly but not so tightly that he risked hurting her. “And were you not injured and exhausted then I would be only too eager to join with you. But for the moment my main priority is your health. That comes before all else.”
Including his aching shaft.
“Because you’re a healer.”

“Because you are mine,” he told her fiercely.