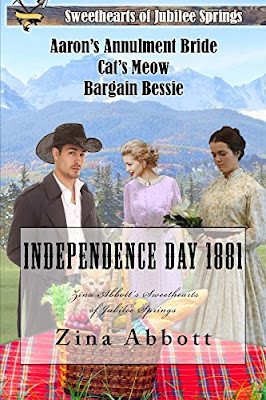 Book 3 - Aaron's Annulment Bride:
Andrea married Aaron so he could get his mining company house, but now she wants an annulment.

Book 6 - Cat's Meow:
Catherine immediately falls in love with tall, hunky miner, Harold. She wants to marry him, but there is one "meowly" little problem.

Book 7 - Bargain Bessie:
Brought to Jubilee Springs after the death of her mother, Bessie, a confirmed spinster meets Zeb, a decisive, impatient rancher who is NOT pushing forty.

Mrs. Millard had matched her with two miners, Harold Calloway and Aaron Brinks. Both seemed very nice and acceptable, but Harold’s letters were the ones that resonated with her. Aaron seemed like a quieter person. He told the bare facts about how he had come to Jubilee Springs to work in the mine, had persuaded his parents to relocate there with their mercantile, and how he currently lived above their store, occasionally helping out when he wasn’t at work. He went to church, which was a plus. However, most of both of his letters dealt with some book he was reading at the time. In the first letter, the book he described had a French-looking title that she tried to sound out. It looked like Less Miserables to her. She had shaken her head in disbelief when she first read that letter. She wanted to know more about him; she didn’t want a book report.
On the other hand, Harold was more forthcoming about himself and the town.

Snippet #2b from Cat’s Meow:

Royce held out a letter in Harold’s direction. “Only one for you today, Calloway.”
Harold nodded his thanks as he reached for the letter before any of the jokesters that lived in the bunkhouse could snatch it first. He held it to his nose and smiled. He didn’t have to look at the handwriting or read the return address to know it was from Catherine. He began to open it as he walked back to his bunk.
Someone scurried to his side and slightly behind him. Charlie. The man leaned forward long enough to take a deep whiff before Harold’s sweeping arm threatened to knock him off his feet.
“Whew! Must be from Miss Rosewater again. Stinks like roses. No wonder your clothes smell so funny with you keeping them in the same chest with all them letters.”
Harold muttered to the man as he began to read Catherine’s missive. “Find something else to do, Charlie.”