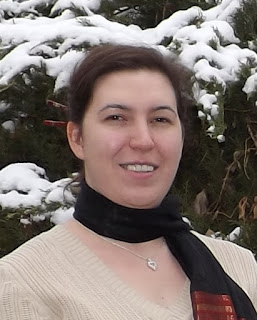 Morgan J Muir lives in Utah with her fantastic husband, three offspring, and as many cats (but she doesn’t carry them with kits in sacks, and has never been to St. Ives). She grew up riding horses and motorcycles and listening to her grandmother read poetry. She grew up reading any sci-fi/fantasy novel she could get her hands on and so was surprised the day she discovered that she also really enjoyed historical fiction.
Morgan always loved to write and draw and her parents always liked to say that they knew she’d write a book some day.  Ever since she was small she told stories and drew pictures for her tales.  When she got old enough, all of her spare time between classes was spent writing and she always had a notebook with her.
Her first novel was originally written after her first child was born, to help her pass the long, lonely hours as a new stay-at-home mom.  As her kids got older and more came she was too busy to do much with her stories, until one year she was introduced to NaNoWriMo, which finally rekindled the spark that led her to finish what she’d started.

Mariah has chosen to become a vampire, but she can’t remember why. 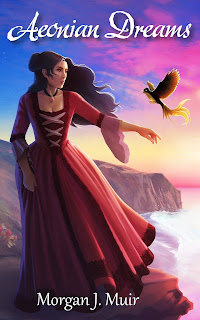 Upon waking in the labyrinthine caves of Sophus, a centuries-old vampire, Mariah can’t remember all the choices that brought her there, but she does know there are dangerous secrets hidden within her.  As she learns to control her powerful new body— and its bloodthirsty urges— Mariah discovers a unique ability to travel through a world of spirit, the key to remembering her past, and possibly the future.

At first, it seems her path is simple: learn to control her bloodlust, find her missing husband, and return with him to raise their son. However, things are more complicated than they seem, and neither Sophus nor her husband’s captor is willing to let them go. Mariah must use whatever skills she can to find her husband and protect her still-mortal son, but will it be enough?

Lying in Mariah’s hand was a small, brightly woven bag. The colors jumped out at her, like a story begging to be heard. They pulled at her mind, encouraging her to open the bag. She loosened the ties and a small, red stone, carved in the shape of a bird, tumbled onto Mariah’s hand. Tu’uma, the word came to her mind, a sacred, precious stone to the Wayuu. She ran her fingers gently over the bird as memory teased at her. Focusing on the figure in her hand, she allowed her mind to wander.
As before when she’d entered the spirit world, Mariah found herself standing in the field, this time bursting with flowers, as the scent of impending rain and the breeze holding whispering voices washed over her. Raising her hand to inspect the figurine, she found instead a living bird who flitted around her, his black feathers glinting with gold.


Well, hello there, she said, and he trilled at her, dancing in the air. He darted around her head, and as she turned, she saw in the distance a fire burning, like a large campfire. Her stomach knotted at seeing it. It was waiting for her.