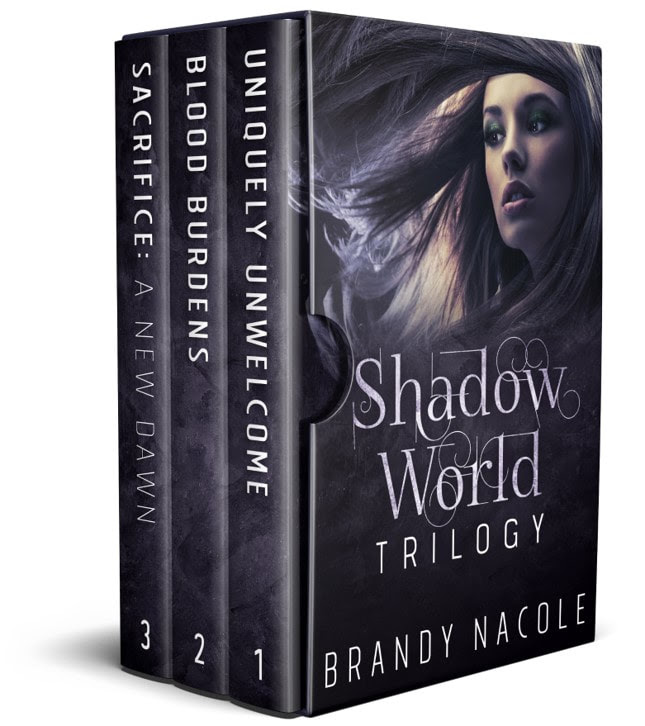 I must dare to be different in a world where I’m unwelcome in order to save the one person left in my life, my half-sister Addie.
This deluxe boxed set contains the complete Bestselling Shadow World Trilogy (Uniquely Unwelcome, Blood Burdens, and Sacrifice: A New Dawn).
Enjoy the thrill as power is pushed to its limit, hearts are broken, and some pay the ultimate price as Racquel fights an ancient evil that is determined to make the Earth bleed, and Racquel with it.
The box set includes:
Uniquely Unwelcome
The Shadow World Volume 1
Racquel is unique. The bloodlines of four of the most powerful beings in the Shadow World are intertwined within her DNA. She has never craved attention. She just wants to be able to live as normal life as she can. But she's about to find that even though she's uniquely unwelcome wherever she goes, her abilities also make her the best chance the Shadow World has to stop a threat to all the Shadow races. Once arriving home, Racquel finds that greater evils exist and that the person she cares for most in this world, her half-sister Addie, has been kidnapped along with other Shadow World beings. Racquel finds herself facing horrible odds with those who would rather see her dead than alive. As her journey continues, Racquel learns more about herself, what she is capable of, and that not every being looks at her as an abomination. Coy, a human captive that Racquel saves from the Vampires, starts showing kindness toward her. Racquel tries putting distance between her and the human boy but as they spend more time together it becomes harder and harder for Racquel to fight the affection she wants and needs. But will Coy's friendship and her new found discoveries be enough to help Racquel unravel the strangest mystery that has ever plagued the Shadow World?
Blood Burdens
The Shadow World Trilogy Volume 2
As someone with four Shadow bloodlines, Racquel is uniquely unwelcome even among her fellow werewolves, shape-shifters, vampires, and witches. Growing up, she was bullied and tormented for being a “hybrid,” a condition frowned upon by Shadow society. After saving her sister and a number of other kidnapped Shadows from a diabolical plot to create a Shadow army, many have found a new respect for Racquel, but she is far from accepted in Shadow society, and the evil is far from over. To complicate matters, Racquel now finds herself torn between two brothers. Coy is caring and has helped Racquel through her struggles, and Micah, who Racquel has only met once but who is somehow, having dream conversations with him. Racquel becomes torn between following her heart while breaking it at the same time. In the second installment of the Shadow World series, Racquel and her sister Addie face off with the Shadow leaders against a threat that could bring the world to its knees. Power will be pushed to its limit, hearts will be broken, and some will pay the ultimate price as Racquel and her group of Shadows fight against an ancient evil that is determined to make the earth bleed and Racquel with it.
Sacrifice: A New Dawn
The Shadow World Trilogy Book 3
Racquel was once uniquely unwelcome, an outcast in both the human and Shadow worlds. In desperation, the Shadows—the loose alliance of Vampires, Werewolves, Witches, Shape Shifters and Faeries—turned to Racquel for help against the sorceress Cerelia, who threatened all Shadows. Now that Racquel has protected the Shadows by defeating Cerelia, it seems like things are picking up. Racquel is ready to challenge the Shadows’ Ruling Council on the injustice of the laws that made her and her family outcasts among the Shadows, and which is causing suffering among her friends. Racquel has little time to enjoy her victory. Micah, an innocent subjected to experiments by Cerelia and now the only other person in the world like Racquel, is summoned to appear before the Ruling Council to be examined. The Council has already warned that if Micah is deemed to be “unclean” and a threat to the Shadows, he will be executed. And there are agendas hidden in agendas, as well. A secret faction wants to challenge Racquel, who they still see as being an unclean creature due to her mixed-Shadow heritage. Worse still, the mysterious prophecy made by Kaya, queen of the Fay, is about to become true, and Racquel is about to be faced with her deepest fear: that she is still unwelcome in the world. Betrayed trust and a new danger to the Shadow world are waiting for Racquel, and in the end, she may have to make the ultimate sacrifice in order to save the world and her friends from destruction.
Goodreads* Amazon 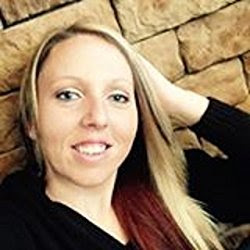 Gemini Brandy Nacole is a writer of urban fantasy and paranormal books published by Ponahakeola Press. A reader from a young age, Brandy has always loved folklore and stories of beings that go bump in the night.
Whenever she’s not reading or writing, Brandy is spending time with her family and friends, throwing around crazy ideas, teaching, and singing like a rock star at a concert for no one else but herself. She loves plants, but unfortunately is a killer of anything that requires water but can’t voice (scream) their needs.
Website* Facebook * Twitter * Amazon* Goodreads