Arabella Sheraton grew up on a diet of Jane Austen, the Bronte sisters, and many other writers of that period. From Jane Austen to Georgette Heyer, Arabella has found both enjoyment and inspiration in sparkling, witty Regency novels. She also loves history and generally finds the past more fascinating than the future. Arabella wrote her first Regency romance to entertain her aged mom who loved the genre. Arabella is honoured to share the adventures of her heroes and heroines with readers. 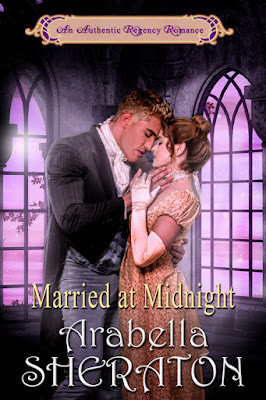 When the young and handsome Earl of Pennington discovers the inheritance from his great-uncle depends on him marrying at midnight on the eve of his thirtieth birthday, he is irate. Marriage is not part of his plan to save his impoverished estates. He crosses paths unexpectedly with the beautiful Roxanne Chesney, who is fleeing from her abusive husband.

He offers her a contract: marriage for six months to help him fulfil the conditions of his great-uncle’s will, enabling him secure his inheritance. In return he will pay her a small fortune.

Can Roxanne resist this offer? What about the revolting Edgar Doyle who forced her into a loveless marriage that has not been consummated? Roxanne has escaped Edgar’s clutches, but she wonders how long she will manage to evade him. The earl’s contract has no strings attached. The offer is irresistible except for the fact that Roxanne is already married!

Roxanne went upstairs later in the morning to look in on Edgar. Reluctant though she felt to exchange even a word with him, it was her duty as hostess to check his state of health.
He glared at her. “So, I expect you’ve come to crow.”
He looked terrible. His face was unshaven, his skin pasty and his eyes bloodshot.
“No, I haven’t,” she replied. “I’ve come to see if you’re still alive and I hope that this mishap will dissuade you from targeting the Pennington family.”
His eyes blazed and his lips tightened. “I want my pound of flesh, milady, and you’re going to help me get it.”
Roxanne recoiled. “What are you talking about? Your plans are over. Your attempt at robbery has failed.”
Edgar allowed a smirk to creep across his face. “Think so? I’ve got news for you. This mishap, as you describe it, has worked out perfectly for me.”

Roxanne took a deep breath, wondering when she would ever be rid of the man. She felt ill and desperately wanted to run out of the room and be sick just to get rid of the feeling, but she didn’t. She forced the bile back down and sat looking composed and confident.