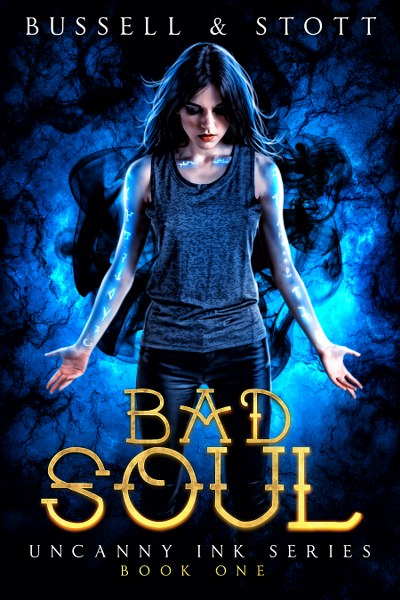 Promises, rules, bones; Erin Banks will break them all.

Unscrupulous and lethal, Erin has everything she needs to be an assassin in a world full of mobsters, monsters, and magic.

She wasn’t born with powers, but thanks to her Uncanny Ink—arcane tattoos that transform her body into a magic-fuelled killing machine—she’s more than a match for anyone dumb enough to stand between her and getting paid.

Fresh out of prison, Erin wastes no time getting back to what she does best: running down wanted men and claiming their bounties.

But when a powerful demon lurking in a black cathedral hires her to round up an errant soul, the creature offers a reward far more valuable than money…

He offers Erin the key to unlocking her tragic past. The key to the mystery surrounding her long-lost brother.

Magic, scares, and acid-tongued snark collide in this thrilling urban fantasy series set in the Uncanny Kingdom. Buried secrets and whiplash twists will keep you riding the edge of your seat. Read Bad Soul now for a pulse-pounding tale you won’t be able to put down.

"The writing is very colorful with lots of British slang and strange and seedy characters. The plot is fast and furious with unexpected developments and exciting scenes. A nice piece of gritty urban fantasy." ~ Kasey's Book Nook

"Bussell and Stott deliver a dark and gripping read in Bad Soul, marking Uncanny Ink as a must read series for Urban Fantasy fans." ~ Inspired Chaos

"Smart, funny, irreverent with tons of action... [Bad Soul] has it all in spades." ~ K. Bird Lincoln

As it turned out, the giant of a man—whose name was Gerald—didn’t want to stab me. Which was a bit of a relief. I’d yet to have my tattoos reapplied, and I didn’t fancy my chances against a bloke his size without them. By the looks of him, he could’ve gripped me in a bear hug and squeezed my insides outside like the contents of a tube of toothpaste. ‘The Long Man is waiting for you,’ said Gerald. The Long Man? That rang a bell. We hadn’t crossed paths before, but I’d heard all sorts of whispers about things like him in the darkened corners of pubs at three in the morning. About demons. ‘Okay. Where’s he at? Maybe we could do lunch.’ ‘He is inside of me,’ he replied. ‘Ah. Oh. Christ.’ Demons tend to occupy little realms of their own, separate from the everyday world but connected to it via hidden portals. Well, hidden unless you know where to look. It might be a crack in reality at the bottom of an ancient well, or a hollow in a tree that leads to another place. Or the door might be a living thing, in this case a really tall, wide man named Gerald. ‘You’re sure he wouldn’t just like to do this over the phone?’ I asked as I followed him across the pebble beach and into a small hut. ‘Face-to-face,’ said Gerald as he began to undress, carefully folding each item of clothing and placing it aside as he did so. Then came the horrible bit. Well, the sight of Gerald stark bollock naked wasn’t exactly a delight, but what he did next was grimmer still. He took the knife he was holding, turned it upon himself, and jabbed it into his throat. He didn’t flinch, didn’t scream, he barely even blinked. He dragged the knife down his neck, down his chest and stomach, until he reached his groin. The whole time he cut away at himself, not a drop of blood was spilt. Finally, when he was done, he kneeled down and used his fingers to dig into the long gash he’d fashioned, then he began to peel himself open until there was a gap large enough for me to crawl through. ‘You know, you’d go down a storm on Britain’s Got Talent,’ I said. He didn’t laugh, which was fair enough. Crap joke. ‘The Long Man is waiting,’ he said. ‘Right. Just gonna crawl inside you now, Gerald. Nothing weird about that.’ I got down on my hands and knees and began to creep into the opening. I wasn’t sure what I was expecting, exactly. Would I be fighting my way through organs? Apparently not. Instead, it was like I was making my way through a gap in a fence, and I found myself crawling across a carpet of brown, fallen leaves and twigs. I turned to see a gap in reality. A hole through which I could still see the beach hut I was in just moments ago. ‘Okay. Right. Cool.’ I stood, brushed the clinging sticks and leaves from my jeans, and took in my surroundings. They were, in a word, bleak. The colour scheme was shades of grey and black, the surrounding landscape mostly barren rock. A light breeze toyed with loose stones and twigs, stirring up the parched earth. It wasn’t the kind of place tourists go mad for, put it that way. There was a single building a little way in the distance, an ancient, crumbling cathedral, made from large blocks of stone blacker than Hitler’s heart. Its spire was broken in two, most of it laid out on the ground like a fallen tree. A twin pair of stained glass windows looked down at me depicting jagged flames licking at the bodies of anguished sinners. A wide-open set of wooden double doors formed the mouth of the building. ‘Time to stick my head into the lion’s gob,’ I said to myself, and walked towards the entrance. 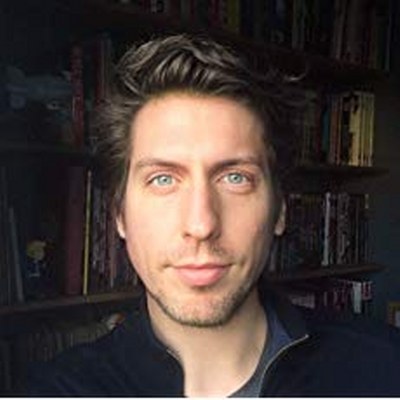 David Bussell is a winner of the P.G. Wodehouse New Comic Writer Award. David is an avid fencer, and a committed comic book fan. Rumours that David was conceived on an Indian burial ground remain unfounded 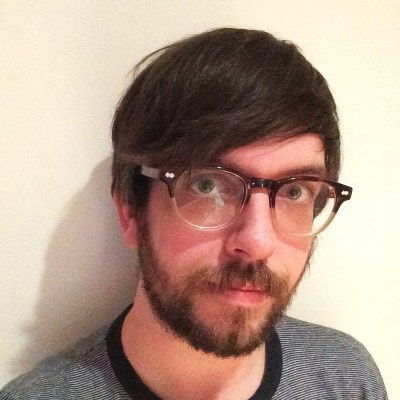 Matthew Stott writes strange stories. Influenced by the likes of seminal TV show ‘Doctor Who’, and writers Neil Gaiman and Stephen King, he crafts stories full of creep, wonder, and adventure. Matthew is not a murderer.