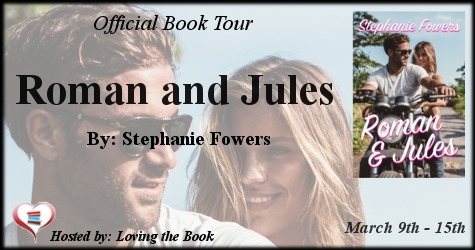 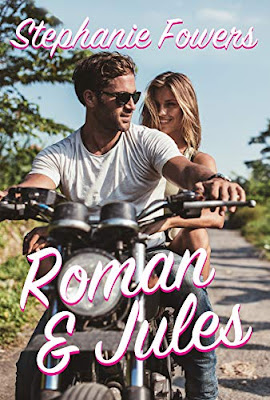 When Jules meets Roman Verona at an exclusive Vegas party, she doesn’t suspect the bad blood that runs so deep between Roman and her boyfriend, Ty, until the two men have it out in front of her. Even worse, Jules finds out that Ty has never loved her. She storms away, only to have her ex’s sworn enemy offer her a ride into town... as well as a shocking proposal.


A nice girl wouldn’t even consider making her ex jealous with a sham marriage, so why does she chance it with Roman?

Acting the role of devoted husband, Roman soon becomes fascinated with more than Jules’s sweet smile and poetic soul. As her band’s fame grows in Vegas so do his feelings for her and what started out as revenge against his miserable cousin turns into something deeper.

But bad boys don’t settle down. So why does Roman risk everything to win Jules’ heart?

All bets are off in this modern and sleek tale of star-crossed love!

Stephanie Fowers loves bringing stories to life, and depending on her latest madcap ideas will do it through written word, song, and/ or film.

Presently, she lives in Salt Lake where she's living the life of the starving artist.

Roman wanted to stop what Jules was about to say. He knew it wasn’t good by the way she tilted her head to the side and bit her lip. That same lip that had been so soft on his. He just got caught up in her. It was hard to tell when that had happened—between the laughter, the dancing, the singing… the kissing. “I’m not sure… we’re a good idea,” she whispered. She twisted her skirt with clenched fists. The rainwater from it dripped over her already soaked legs. She seemed even more of a water sprite than before. “This is going too fast. And what if… what if Tyson…? I don’t want to make things more confusing.” He belatedly realized what she was saying. It sounded like she was going to let Tyson back into her life—and after what he’d done? Disappointment flooded through him and rubbed into his gut. Suddenly Roman knew how Tyson could goad him into a fight that would lose him his inheritance. Roman had to get a grip on himself and shrug off this girl’s power over him before he completely lost his mind. “What happened to forgetting about him?” he asked. She shrugged, looking away. Her eyes were on that tawdry Chapel del Frate across the street. The florescent lights flickered brokenly. “You don’t understand.” Her lowered voice turned soft and sultry with that Southern accent. “We were talking marriage. I just want to be sure about everything. And I can’t just go with the first guy that makes me feel…” She circled back to him. “I’m sorry, Roman.” Hearing his name come out of her mouth made his heart flutter for a split second. She attempted a trembling smile. “See that Chapel del Frate over there?” “The one advertising Friar Lawrence’s sale on rings?” Roman couldn’t keep back the hard edge from his voice. “Pretty pathetic right?” Her cobalt blue eyes were bright with sadness. “I teased Ty about swinging by after the party. You should’ve seen his face—it looked like yours right now. He said that we’d get diseases just stepping inside.” Jules shouldn’t have compared Roman to his cousin—now Roman would do anything to show that he was nothing like him. She had no idea who she was dealing with. “Is that so?” Roman asked. “How about we find out?” He caught her hand and headed for the Chapel del Frate. She picked up her skirt to keep up, her boots thudding against the watery ground. “What are you doing? We can’t just walk in there.” “We can’t? Why? The diseases?” She let out a nervous laugh. Roman was starting to get that Jules loved a good joke, and maybe she’d think this was funny. An idea was forming in his head. A crazy one that had no business being in there, maybe because his lips were still burning with the memory of her and it was making him do insane things. Or maybe because he now knew how his cousin could get to him, and he had to find a way to get him back first. He shoved his shoulder against the heavy metal door and walked in like a cowboy swaggering into a saloon. The chapel was a reception room with whitewashed walls, barred windows, and a scuffed tiled floor. A chandelier with plastic crystals dangled from the ceiling and an archway of fake flowers separated an aisle of metal folding chairs done up with fake silk roses in an attempt to look classy. It failed miserably. There was a fine layer of dust over everything. Jules’s hand tightened over his. “Okay,” she said. “We saw it. Let’s go.” She switched directions and almost ran into the officiator who had edged behind them like a shadow. He was a heavyset man with broad shoulders and a full set of thick, black hair. He held himself up with an exaggerated air of self-importance. “You’re clearly in love,” he intoned dully. “We got ourselves a sale tonight. Eighty bucks for the ceremony, but if you want a bouquet, it’ll be a hundred bucks, and I’ll throw in a veil to sweeten the deal.”