Mercy Can She Find Freedom in Love by Rachel Rossano Official Book Tour! 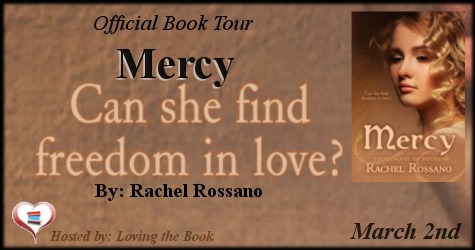 Rachel Rossano is a happily married mother of three children. She spends her days teaching, mothering, and keeping the chaos at bay. After the children are in bed, she immerses herself in the fantasy worlds of her books.

Tales of romance, adventure, and virtue set in a medieval fantasy world are her preference, but she also writes speculative fantasy and a bit of science fiction.

The royal wedding approaches and the country is alive with anticipation.

Among the craftsmen traveling to the capital is Constance Rendare and her family. An artist, a widow of an unhappy marriage, and the mother of a young son, she dreams of escaping the cruel servitude of her father’s household.

Wilard Naron serves the Earl of Dentin. He returns to the capital, his childhood home, to collect his earnings and finally free himself from his father’s reputation.

Kidnappings, bandits, and a plot against the king complicate the journey. The conflicts throw Constance and Wilard together as their circumstances grow steadily worse. The more the pair uncovers, the direr the future looks for the country and for them.

~ Universal Amazon Link ~
~ B & N ~  Kobo ~
Click the cover to find these books at your local Amazon:

“He stole my shoe.” I glared at the thief’s back as he perched on the open end of the wagon bed. Crates and barrels blocked my view of what he was doing, but I was reasonably confident it would result in sore feet for me. The thought of needing to walk all the remaining miles to Caraway on unshod feet made my already battered limbs ache all the more. “Surely, he didn’t.” My companion shook his head leisurely. “Master Wilard is not a thief.” “He is a jokester, then, or worse, a trickster. I can conceive of no other possible purpose he might have for taking my only functional shoe.” “Perhaps he seeks to ensure you don’t scamper down and attempt walking.” “I agreed to ride. My word should be enough. Or is your master one of those men who never trusts the word of a woman?”
“There are such men?” I met Hugh’s gaze. I could not find deception in his honest, bland features. Not even a hint of humor glinted in his eyes. He only regarded me with questioning concern that such creatures existed. “There are. I was married to one.” “Married no longer, though?” “No.” The usual bittersweet sensation flooded me at the memory of my late husband. “So the lad is your son?” He glanced at me once again before refocusing on the road ahead. “Owen? Yes, he is my son.” “I only wondered. He doesn’t strongly resemble either you or your sister, except for the hair color.” “He takes after his father in features and me in temperament, if my father is to be trusted.” I tried to suppress the impulse to frown. Father had been bemoaning that truth at least thrice a day for the past two weeks. “Then he must be hardworking, reliable, and determined.” I laughed. Those were not the attributes I would use to describe my son.