The Cookies are Missing! by Karlie Lucas Official Book Tour :) 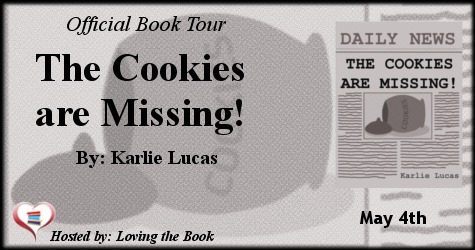 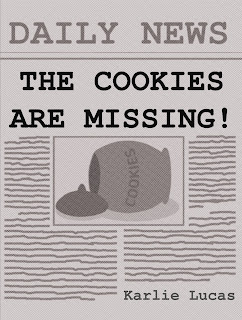 An epic hunt ensues at Grandma’s house to discover who took the cookies from the cookie jar!

Karlie Lucas is a school crossing guard by day and a writer/artist by night.

A graduate of Southern Utah University, Karlie received a B.A. in Creative Writing, with a minor in art. She is a member of Sigma Tau Delta, The International English Honor Society, SCBWI, as well as ANWA, the American Night Writers Association.
Karlie is interested in all things magical and mysterious, especially elves and dragons. She is an avid fan of J.R.R. Tolkien and J.K. Rowling.

She currently resides in Dallas, Texas with her husband and a cat named Kally.

Top Ten List #2
Top Ten Favorite desserts
1- Ice cream. Who doesn’t love ice cream? It’s like the standard go to
2 – Cheesecake. What’s not to love? Especially if it’s one of those Oreo ones.
3 – Coconut cream pie. I don’t normally go for coconut, but there’s just something about it in pie form that can’t be denied.
4 – Brownies. What can I say besides Chocolate?
5 – Blintzes. If you haven’t tried them, you’re missing out. It’s like a crepe but not rolled, and it’s pan fried.
6 – Pudding, especially pistachio or cheesecake flavored, I mean, come on! It’s creamy. It’s rich. It’s prefect. And you can add in whatever you want.
7 – Cobbler, usually apple or peach. You’ve got that sweet crunchy stuff and that gooey filling. Yum.
8 – Chocolate Silk Pie. It’s Chocolate! In a graham cracker crust.
9 – Sugar Cookies, like the melt in your mouth coated with sugar kind, not the cheap tastes like flour stuff you get at the grocery store. Home made all the way!
10 – A Lie, if you don’t know what this is, you’re missing out. It’s a pie baked into a cake. (Some call it something along the lines of a cherpumpkin but my version’s better). Or if, you want to take it a step further, do a glacee pie backed into a giant brownie and decorate it like a cake to have a Conspiracy.)