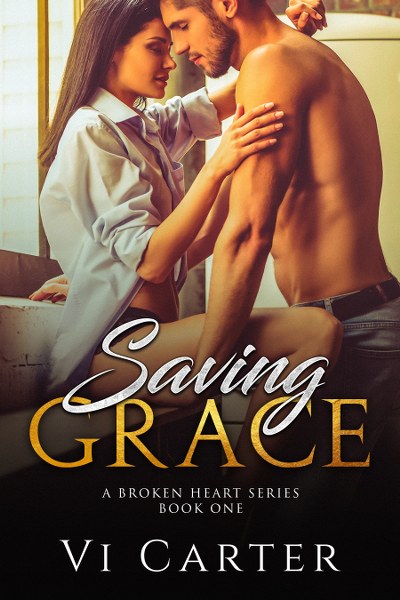 I’ve tried so hard to bury my past.


But nothing stays buried forever...

When Derek walked into my life, he made me feel things I’d hoped never to feel again. The box I hid all my secrets in is opening, and I don’t think I am able to keep it shut this time.

My past is back to haunt me, but Derek is my distraction but I’m not sure he’s enough to keep the ghosts away. I’m not sure if I’ll walk away fully intact this time.

If you like “The Problem with Forever” by Jennifer L Armentrout or “Hopeless” by Colleen Hoover, then Saving Grace will feed your addiction for a romance with real-life struggles.

THIS BOOK CAN BE READ AS A STANDALONE OR AS PART OF A SERIES.

DEREK DEEPENED THE KISS, and I focused completely on that. He moved us towards the wall until my back hit it, his warm body against mine. His hands entwined with mine, resting at our sides. I wanted to yank them out and touch him, but he held them firm, just kissing me. He pushed us harder against the wall and wet pooled between my legs as a moan escaped my lips. I tried to pull my hands free of his grasp, but he held them in place. I pushed harder against him, his length sent electricity through me, and the sensation it caused was overwhelming. My heart raced and my chest swelled as the electricity crackled through my body. The feeling slowly took over all my senses and I opened my eyes. As if sensing me, Derek’s eyes opened at the same time and our kiss slowed until it completely stopped, our lips just resting against each other’s. Our breaths laboured, I continued to fall into his stare. This part of me was opening up at an alarming rate, pouring hot liquid through my body, warmth spilt into my cheeks my hands became sweaty, and I broke eye contact. Derek let my hands go and he took my face in his, making me look at him again. I wanted to squeeze my eyes shut; I didn’t want to acknowledge that something was happening to me. Something that terrified me. “Do you want to see my bedroom?” Derek asked while taking a step back from me allowing the cold to seep in. “Are you trying to seduce me?” I asked, and Derek smiled. In one swooping movement, he had his top off and my body changed gears from the terrifying sensation to one of pure lust. I soaked in every inch of exposed flesh. “Is it working?” he asked, and I just nodded. I wanted him, needed him. I don’t remember going upstairs or entering his room as my body hit his double bed, the kiss never broken as Derek managed to fall with me, but held himself above me. My hands roamed his chest, his shoulders, across his back and returned to his chest again, while his hands ran up my thighs and disappeared under my dress. He stopped an inch from where I needed him to go. I groaned with frustration, but managed to shimmy out from under him. I stood and lifted my dress over my head. I stood in just my red lace bra and thong. Derek drank in the sight of me. The power his stare held over me had me standing taller, feeling truly beautiful.
“Take off your jeans,” I demanded, I wasn’t taking one more step until his jeans were off. They landed on the ground far quicker than I expected, and he stood in white boxers. He stood in front of me, all shoulders and intense eyes. His Viking looks had me squirming under his stare. I was a drowning woman right now. I wanted to run, but instead, I closed my eyes as Derek kissed my lips gently. His lips grazed my cheek before he kissed my left eyelid then my right. “I want to see you, Grace.” He said my name in his husky voice, and the way it rasped out was doing so many things to my body. I was breathless, my heart pounded, but I opened my eyes. My stomach lurched, words coming to my lips as I looked at him, words that terrified me. I shut it down, and let lust fuel me. I bit my lip as he looked at me, and his nostrils flared. He closed his eyes as my fingers went under the band of his boxers, his length filling my hand. I stroked it and his head flopped back, a moan releasing from his mouth. The noise stroked my ego and made me feel powerful. I stroked him again, and he moaned again, louder this time. I quickened my pace, moving faster, and he looked at me, his eyes overcast with lust. “That’s so good.” I moved faster.
“You like that?” I asked, letting my thumb slide off the head. “Oh yeah,” he moaned again, and I smiled. His fingers moved fluidly as he removed my bra freeing my breasts. “You're perfect.” He didn’t look at me as he spoke, his eyes focused on my very hard nipples that he squeezed between his fingers, sending my nerves zinging. I leaned back and had to stop stroking him when he touched me, the sensation too much, but he used the moment to move us back to the bed. 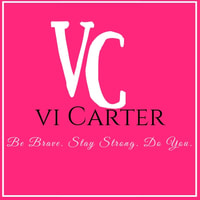 Married with one child, Vi divides her time between motherhood and all the other hats she wears as an Author.

Vi's main goal is to give readers the same emotional ride that she got from reading Colleen Hoover and Jennifer L. Armentrout books.

What are your top 10 favorite books/authors?
This is such a fun one.
Hopeless
Hope(less)
Poison Study
The Duff
Dare you to
I‘m going to start cheating now, I have too many. I’m sneaky. J
Anything by Tijan
Anything by Jennifer L. Armentrout
Anything by Kelley Armstrong
Fear me not
Dante Walker

How long have you been writing?
I started back in 2012 writing fantasy/paranormal/romance. I wrote what I loved but didn’t understand the market correctly. Since I had my daughter contemporary Romance novels are pouring out of me so that’s the genre I’m focusing on now.

What kind of research do you do before you begin writing a book?
It really depends. One I am writing now, the main character has like amazing knowledge of random facts and is pretty intelligent. So I could spend an hour each night researching for that.

Do you see writing as a career?
Yes, that is the hope. I hope that in under a year I will be a full-time author. That’s the dream.

What do you think about the current publishing market?
It’s a tough one. There is so much to learn, but if you’re willing to learn and constantly work on your craft, you can make a very good living from it.

Do you prefer to write in silence or with noise? Why?
Noise. I have a play list that I set up for writing time. I add to it every once in a while; I don’t blare it but I have it in the back ground, it also helps with some bleak topics I tackle, like addictions, child abuse, rape and mental abuse. They are pretty heavy topics but ones that I feel if written well can still make a powerful read.