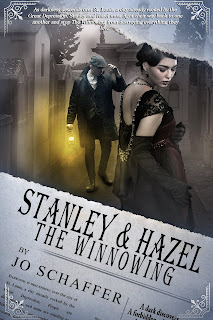 Darkness descends over St. Louis, a city already rocked by the Great Depression. More and more people are disappearing, and some have turned up dead. A sinister secret society is putting forward their plan known as “The Winnowing,” designed to wipe out those they consider “undesirable.”

After Stanley and Hazel foil the diabolical plans of Charles Chouteau, they become instant celebrities. Hazel is thrust into the role of debutante, and risks loses herself in it. Meanwhile, Stanley must deal with the horrific tragedy of his best friend’s death while being threatened by the unseen forces of the Veiled Prophet.

With things spiraling out of control, Stanley and Hazel’s relationship is tested, possibly beyond repair. As bodies pile up, people become more desperate. The divide between wealthy and poor grows ever wider, threatening to tear their worlds apart. Now, the two must find a way to work together if there is any hope at all of saving their relationship and their futures. Jo Schaffer was born and raised in the California Bay Area in a huge, creative family. She is a YA novelist, speaker and a Taekwondo black belt.
She’s a founding member of the nonprofit organization that created Teen Author Boot Camp, one of the nation’s biggest conferences for teens where bestselling authors present writing workshops to nearly a thousand attendees.
Jo loves being involved in anything that promotes literacy and family. She is passionate about community, travel, books, music, healthy eating, classic films and martial arts. But her favorite thing is being mom to three strapping sons and a neurotic cat named Hero. They live together in the beautiful mountains of Utah.
Website | Twitter | Facebook | Instagram | Goodreads

What inspired you to write your first book?
Stanley & Hazel was inspired by my love of classic film from the 1930s and interest in the historic period of that time. So many interesting things were happening in the world. The economic disaster of the Great Depression, the rise of pop culture in Hollywood and the Nazi movement in Germany. Some of those ideologies made their way to America, while the culture experienced a deep fear of scarcity and mistrust of “others”.

Is there a message in your novel that you want readers to grasp?
I want it to entertain, first and foremost. But hopefully the take away is that people are people. We can’t just divide humans into groups, slap labels on them and not expect conflict and misunderstanding that can eventually lead to frightening outcomes like the Holocaust. The more we identify as specialized or elite groups, the less we see one another with compassion and understanding.

What are your current projects?
I am currently working on a few YA projects, including book 3 of Stanley & Hazel as well as an anthology of spooky stories.

Name one entity that you feel supported you outside of family members.

My writing group, Writers Cubed have been the main support through this whole process. They were there through all the early versions of my first attempts at novel writing. Together we created Teen Author Boot Camp and have put a lot of energy and passion into educating and mentoring teen writers. That’s been a major source of empowerment in my writing journey. My best friend, Jonathan is a major part of the Stanley and Hazel story and development. It is something we came up with together.
The inspiration and support of these fellow writers and dreamers has made all of the difference.

Do you have any advice for other writers?
Keep writing! Take classes, form a writing group and get good at taking feedback and rejection. This is part of the process. It’s also important to read a lot of good books while you’re creating your own stories.

What is your favourite theme/genre to write about?
I love writing stories that expose the good and bad in everyone. It’s important to me that my characters progress in some way. Hopefully their experiences take them to a new place emotionally and intellectually.

While you were writing, did you ever feel as if you were one of the characters?
I have never felt as if I was one of my characters but some of them have elicited great sympathy and compassion in me. I try to put myself into their shoes and feel what they may be feeling. There is a little bit of me in each one of them. Writing is a great way to communicate thoughts and feelings about the human condition and to learn about other people.