The Woman America Loves a Latte by Holly Tierney-Bedord Book Tour and Giveaway :) 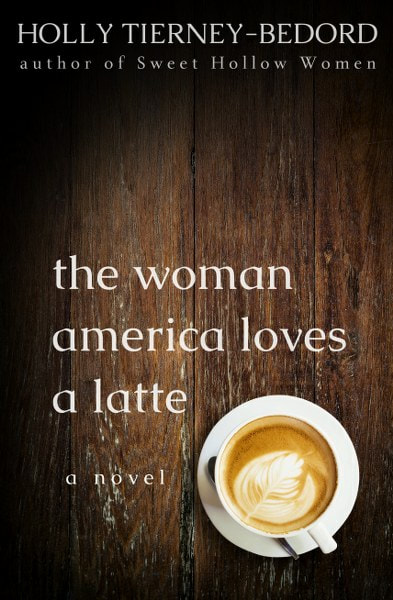 From the best-selling author of Sweet Hollow Women comes a quirky new thriller for fans of Megan Abbott, Liane Moriarty, and Carl Hiaasen.

Veloura has never stood a chance. Raised by a junkie and orphaned as a teen, she's settled for a life of low expectations. She spends her days sprucing up the shack of a has-been bull rider and washing hair down at the local salon. But when it turns out her fiancé doesn't have her best interests at heart, she's forced to come up with a new plan for herself.

An opportunity to be the spokesperson for a coffee chain means a bright future could be hers, if only she can stay ahead of her dark past.

“Suzie,” Vee was saying, “my life is finally coming together. Can you believe I’ve got a wedding to plan?” Suzie wrapped her finger through the phone cord in her kitchen a couple of times. Her two-year-old daughter Britney was sick with the flu, down for a nap, so she’d taken personal days from both her jobs. Unfortunately, she still had to pay the daycare center, but it was nice to be home on a Monday. “No, Vee, I can’t believe it. Have you totally given up on that guy who works at RadioShack?” “God, yes, I’ve totally given up on him.” “What about the guy at the frozen yogurt place? Or maybe just try being single for a while.” “I can’t be single. Where would I live? Back in some rooming house with twenty other people?” “I thought you liked New Horizons?” “It was a halfway house, Suzie, which would have been okay, but when you’re the only person not recovering from an addiction, everyone gives you the coldest shoulder.” “I guess you could stay here with us,” Suzie said. She held her breath, hoping Vee would say no. “No, no. Don’t be crazy. I’ve got everything with Thunder. He’s a man. He owns his own home.” “I hope you’re not marrying him for his dinky little house.” “Gimme a break. I’m not that materialistic. I would never marry some guy for his house,” said Vee. “I’m just trying to tell you that, unlike every other guy I’ve ever dated, he’s an honest-to-goodness adultwith things like a bad back and real pots and pans. I need this kind of stability and support. Doesn’t everyone deserve that?” “Yes, but I thought you said he stays out all night? How does that feel stable to you?” “I think you get that with all guys, at least early on before they’re fully committed.” “No, Vee, not all men are like that,” said Suzie. “Anyway,” said Vee. “Let’s focus on the positive. Like how fast Thunder’s trying to make it all happen.” “Really?” said Suzie. She was still doubtful whether Vee and Thunder were even engaged or if this was some kind of massive misunderstanding on the part of her friend.
“Really!” said Vee. “I asked him about an engagement ring on Monday—the day after he proposed, you know, wondering when we might want to go to the mall and try some on, and just like that, he disappeared. Left the house. Drove away. I was like, ‘Hey! Where’d he go?’ I thought maybe he was going to bail on me! But then later that same day he showed back up and gave me a ring! Can you believe it?” “Barely,” said Suzie. “I can’t believe you haven’t seen it yet. I’ve had it a whole week. It’s a little loose, but I figure I can wear it on my middle finger instead.” “You could get it resized, you know,” said Suzie. “Yeah, that costs money. So, on Tuesday I told Thunder I want to go dress shopping with you. And guess what?” “He presented you with your wedding dress,” Suzie guessed. She lit a cigarette—one of her few guilty pleasures—and blew the smoke out the open window so it wouldn’t drift back to Britney’s room. “Close,” said Vee, “and I’m going to ignore the sarcasm in your voice.” “Okay, I give up. What happened next?” asked Suzie, feeling a little guilty that she wasn’t even faking being enthusiastic about any of this.

Holly Tierney-Bedord is the author of several novels and novellas including Sweet Hollow Women, The Woman America Loves a Latte, The Port Elspeth Jewelry Making Club, and Surviving Valencia. She's also an artist and miniaturist, creator of the mid-century dollhouse restoration blog flipthisminihouse.com, and the author of several non-fiction books about creating miniatures. She lives in Madison, Wisconsin.

What is something unique/quirky about you?
Along with being an author, I’m a miniaturist. That means I make mini furniture and accessories. I have a blog called Flip This (Mini) House (www.flipthisminihouse.com) all about a mid-century dollhouse I fixed up. I show people how to do things like install little ceramic tiles in their dollhouse, recover tiny furniture, make little rugs on a weaving looms, etc. I’ve also written books about these things. You can follow along with my old project (mid-century dollhouse flip), or new projects (room boxes and a farmhouse style dollhouse flip) on Facebook or Instagram too under FlipThisMiniHouse.

What kind of world ruler would you be?
I would be really stressed out, LOL! I’d want to surround myself with a great team of really kind, intelligent, caring people who are hard-working, calm, and serious. There’d be a lot of rules. It probably wouldn’t be very fun having me in charge. Citizens would have to do things like pick up stray garbage on Saturdays, learn several languages, recycle everything, and adopt all the stray animals (I realize I’m being hypocritical considering I’m currently pet-less). On a positive note, I’d put little pubs featuring live music everywhere. I think I’d get overthrown fairly quickly.

What are you passionate about these days?
Sleep. Healthy eating. Watching The Bachelor.

When did you first consider yourself a writer?
Always!

Do you have any “side stories” about the characters?
I do! I have a novel called Little Miss Eyes of Blue coming out soon, featuring stories about Veloura’s parents when they were first married, her and Suzie when they were younger and first became friends, and other characters. It’s the prequel to The Woman America Loves a Latte (but it works fine to read The Woman America Loves a Latte first).

What did you enjoy most about writing this book?
I really loved writing The Woman America Loves a Latte because Veloura, to me, feels so real and likeable. I often write stories with rather unlikeable characters, and while it can be interesting, it’s sometimes a little heavy. This book was a lot of fun to write.