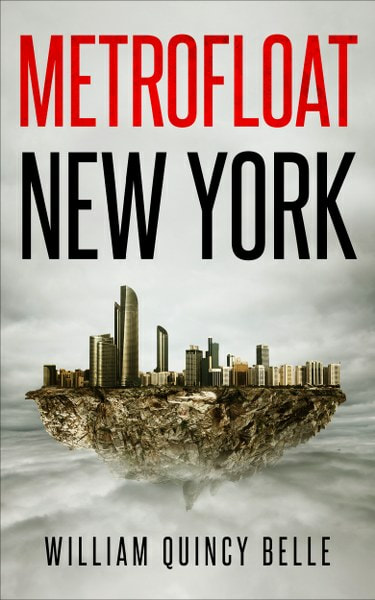 Several hundred years in the future, Earth is a different planet. Antigravity has been invented and “flying” has given way to “floating”: giant platforms with cities remain above the growing surface temperatures as enclaves of the privileged. A global pandemic has wiped out 80% of those on the ground, and a virulent, flesh-eating disease, necrofasc, has left most with artificial body parts. Insects are the main food staple. A utopia for some, a dystopia for others.

Metrofloat New York, a futuristic city of thirty million, is run by an oligarchy of five rich and powerful people. An unknown assassin, working from within the system, attempts to seize control and declare himself dictator by methodically removing all rivals. Detective Matthew Heart of the Metropolitan Police must deal with his partner, a cyborg policewoman, his unofficial family, a transgender woman and her one-legged daughter, and a mysterious assailant bent on taking over the world by killing anyone who stands in his way.

Alan and Terry were skinny enough to slip through the security perimeter into the antigravity zone. Already, they heard the pounding of the AG machines. Workers in the area often wore ear protection, as the constant noise could damage their hearing, but when one is young and foolish, protection is for wimps. They climbed down to the lowest scaffolding and looked out over the panorama below. The ground was a good kilometer down, speckled with the twinkling lights of the settlement. Each light was a potential target for a jump-and-grab, so tonight looked to be an excellent opportunity. Rumors had been circulating around the high school for over a year about thrill seekers doing the unthinkable: bungee jumping from the metrofloat. Alan and Terry had pooled their money and bought the latest in equipment, including a controllable elasticized cable, a double safety ankle harness, and a precision-positioning system with automatic height detection. The flexible anchor allowed them to set up the bungee in any location in record time, so they could get in, jump, and get out before the authorities knew they were violating restricted areas. In the last few months, they had brought along groupies of the informal thrill seekers club, and because of those witnesses, the two of them had become underground heroes. Who in their right mind would do such a thing? Tangible proof was good for their reputation, so they brought things up from their jumps. Over open land, they returned with a rock or a plant, but the real fun was over settled areas. So far, they had taken pieces of clothing drying on lines, things on outdoor tables, and toys and tools left out. Tonight they wanted to go an extra step and steal a village marker. The other items could come from anywhere, but a sign showing the name of the community would prove they had jumped over a settlement. By using the max extension on the cable, they hoped to remain down long enough to use their tools to unfasten a sign from its support. Alan would make the first attempt. He had decked himself by attaching various tools to his belt and wearing a helmet with a lamp. He had double-checked his ankle connectors and made sure the safety harness was in place. Terry gave him the once-over, enumerating each item out loud so they both knew they had checked everything. Alan climbed over the railing and held on as Terry fed out the cable so it was free and clear of the scaffolding. Quivering with excitement, Alan looked over at his friend. Terry grinned and gave him a thumbs-up. Alan turned back to the open space, took a deep breath, and spread his arms out. He bent his knees, then pushed off into a swan dive. Alan had ten seconds of free fall before the cable slowed his descent. Ten seconds of weightlessness as the wind whistled by his head. It was peaceful. And surreal. It wasn’t every day somebody jumped from a height of a thousand meters. Looking toward the ground when he jumped, Alan twisted as he now fell, upside down, and brought his head up to look off into the distance. The light from his helmet flashed on something. He swept his head back and forth until the object was again visible. There was a human body three meters from him, falling at the same rate. It tumbled in the air. Judging by the looseness of the limbs, Alan guessed the person was unconscious. Or dead. Wouldn’t somebody falling to their death be thrashing about? He looked toward the ground. The lights were coming up, and he felt the cable tense to reduce the speed of his descent. Alan looked back at the body, which continued to fall at a steady rate and was moving away. He bent his head up so he could follow its path. There was a crash followed by a thump. Holy crap! he thought. This was unexpected. They had better get the hell out of there. Alan slowed to a stop, hanging upside down two meters from the ground. He fumbled with the controller, pressing the button to ascend. The mechanism set into motion, pulling him up. He looked back down and saw, in the semi-darkness, a hole in the roof of a nearby building. What the hell was going on?