A love that crosses the centuries.

An ancient druid pendant shows archaeologist Janet visions of Roman soldier Trajan. The visions are of danger, death, and love—but are they a promise or a curse?

Her fiancé Daman abandons her before the wedding, her beloved museum is ransacked, and a robed man vanishes before her eyes. Haunted by visions of a time she knows long gone, Janet teeters on the edge of a breakdown.

In the shadow of Hadrian’s Wall and 2,000 years back in time, Janet’s past and present collide. Daman has vowed to drive the invaders from the shores of Britain and march his barbarian hordes to Rome. Trajan swears vengeance against the man who threatens both his loves—Janet and the Empire.

Time is running out—for everyone. 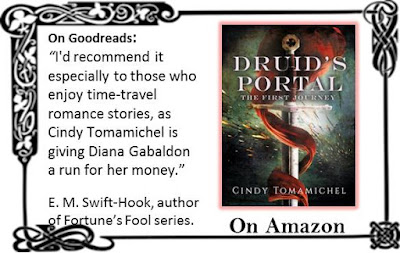 A love that can never be.

Ethan—latest guardian of the Arwen pendant—finds his heritage of time travel a burden he can scarcely endure. Rowena—last of the line of Daman—is a soldier in the Celtic army, forced to perform deeds that haunt her. Both tormented by visions of the other, separated by barriers of time.

A time that should not exist.

Rowena flees the catastrophic end of her time but is trapped by an ancient family pact with an evil goddess. Desperate to save her, Ethan crosses over into her timeline, where his parents never met, and Daman—their greatest enemy—rules.
The past is ruled by a man who knows the future.

Thirty days to stop a goddess taking over her body. Thirty days to save his timeline. Together they will fight their way through an altered history to the dark past of Stonehenge.

But time is running out—for everyone.


Find a world where the heroines don’t wait to be rescued, and the heroes earn that title the hard way.
The Druid’s Portal series is a genre blend of action, adventure, romance, time travel and magical historical fantasy set in Roman Britain.

What are your top 10 favorite books/authors?
I’ll cheat a bit and add in series. Hey, I am a fast reader.
What book do you think everyone should read?
Mine- obviously! 😊
But more seriously, it’s really hard to recommend books, as people differ so much in taste and interests. A book that rocks the world of one person may be either impenetrable or rubbish to another. However, a book I found inspiring was Jane Goodall’s book “Hope for Animals and Their World: How Endangered Species Are Being Rescued from the Brink” which was full of stories of scientists rescuing animals and studying them so as to preserve their species. For anyone that despairs at the state of the world, this is a book full of hope.

How long have you been writing?
I wrote a little when a teenager, but really got stuck in when in my 30’s. So about ten years of terrible poetry, and twenty years of novels and short stories.

Do the characters all come to you at the same time or do some of them come to you as you write?
No, sometimes a new character has to be added in, or a character will pop up when writing and demand their time in the spotlight. The main characters are usually solid before a book starts, but I don’t like to know too much of what’s going on, I like to surprise myself.

What kind of research do you do before you begin writing a book?
I read generally for historical books to get feel for the time. I search for something that’s a bit of a hook – Roman sandal discoveries, a carving on a stone or the diet of a Roman soldier. There are some great online courses offered (Online Learning) and I have done an archaeology one, and Life near Hadrian’s Wall. From there, I can research specifics during writing. I also keep an eye out for new research finds, adding in a lot of the digging results at Vindolanda, a fort along Hadrian’s Wall.

For science fiction and fantasy, I follow much the same pattern. However topics vary widely, and I have researched terraforming (changing the surface and atmosphere of a planet), cuneiform writing, string language (knots in string were a form of communication , a little like morse code) and making pemmican (a travel food of dried, meat, berries and fat) and using herbs.

Do you see writing as a career?
It is a part time career now, as it allows me to fit in other bits of life tucked in around the edges.

Do you read yourself and if so what is your favorite genre?
I read according to mood and whim, spanning fantasy, scifi, romance, action adventure and mysteries. But I do tend towards the action adventure end of the spectrum for preference.

Do you prefer to write in silence or with noise? Why?
In silence generally, although I do get out to cafes and find the act of blocking background noise helps concentration. I have written in the middle of preparing dinner, and walking across carparks on the back of a receipt. However I find music terribly distracting.

Do you write one book at a time or do you have several going at a time?
Write one at a time, and try to get a project finished. The last is not that successful, as I have quite a few novels in various stages of editing, all screaming for attention. But I have a great critique group for early drafts, so I am often working on several books at once.

Pen or type writer or computer?
All of the above – I generally write on the desktop computer. However there are folders full of post it notes, and notebooks full of plot ideas. The best thing of late is a folding keyboard which hooks wirelessly to my phone. I put it straight into googledocs, and transfer later to word. But I wrote the last 10,000 words of a book while on holiday on my little folding keyboard, while sipping hot chocolate and watching the ocean go by on a cruise.
I am so old I used a manual typewriter for university essays, and the sound of the little dinging bell still makes me quiver. We are so fortunate technology has moved forward, writers really have a wealth of tools to use today.

What is your writing process? For instance do you do an outline first? Do you do the chapters first?
I have a rough outline, although this is often very basic as I don’t like to plan it out too much and lose the sense of adventure. For Druids Portal, since it is a multi-generational time travel, with alternate history and multiple time trips, I have done a flow chart to make sure the events all make sense. When ready to write, I set up a document with a manuscript format, and chapter headings. Which gives me as much framework as I need, and settles the idea as a novel, rather than a mass of notes.
What are common traps for aspiring writers?
Talking about writing more than actually doing it. Social media is also a time suck most writers would do best to avoid as much as possible.

Do you try more to be original or to deliver to readers what they want?
I probably focus on originality. If I was sensible, I would be writing in more popular genres.

If you could tell your younger writing self anything, what would it be?
Get stuck into it. Don’t bother reading dozens of how to write books. Give up the turgid poetry. Read the Hero’s Journey earlier. Watch more Star Trek.

How long on average does it take you to write a book?
I can knock out the first draft of 70,000 words during the month of Nanowrimo (Write a novel in November) but redrafting and editing can take many months.