An avid gardener, artist, musician and writer, Emily-Jane Hills Orford has fond memories and lots of stories that evolved from a childhood growing up in a haunted Victorian mansion. Told she had a ‘vivid imagination’, the author used this talent to create stories in her head to pass tedious hours while sick, waiting in a doctor’s office, listening to a teacher drone on about something she already knew, or enduring the long, stuffy family car rides. The author lived her stories in her head, allowing her imagination to lead her into a different world, one of her own making. 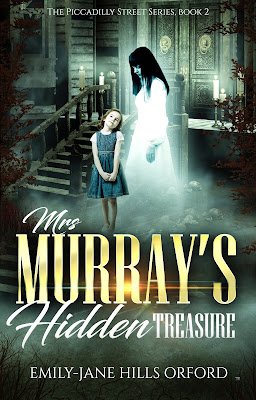 There is a hidden treasure in the grand old mansion on Piccadilly Street, in a place called London, but not the real London of English fame. There’s also a lot of mystery and a murder that’s been unsolved for decades. But it’s the treasure that captures Mary’s interest.

Why the intrigue? Apparently there’s a little bit of magic connected with this treasure. And so the adventure begins.

Who will find the treasure first?

“Ah! So this is where it’s hidden.” It was the unmistakeable voice of Miss Penelope. The girls shuddered as Mrs. Murray faded into the fireplace and disappeared. Brunny and Briddie turned around slowly to face their opponent. Mary hesitated before taking a cautious, timid look over her shoulder. Rosie moved closer to her friend and looked as well. There she was, in all her evil splendor, Elizabeth and Stocky standing on either side of her.


“And you thought I wouldn’t be watching.” She cackled loudly. Not the cackle that Mrs. Murray did when she tried to laugh, but a distinctly evil cackle that sent shivers up and down Mary’s spine.