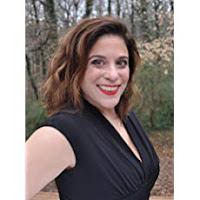 Kristina Seek's debut novel, The Hashtag Hunt, was published in 2018. She is a graduate of Queens College in Charlotte and a member of Romance Writers of America. In March of 2019, she quit her day job to focus on a career in writing.

Kristina lives in North Carolina with her husband and son. She cherishes time with her friends and family, loves traveling to new destinations, and plans to cross many other items off her bucket list. 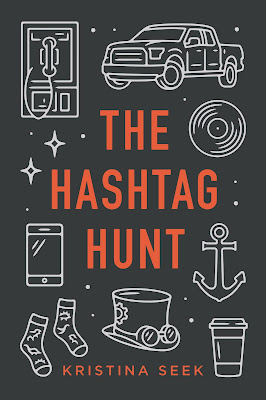 The only reason Lauren entered the Hashtag Hunt was for the $10,000 grand prize. She needed seed money for her startup, and it sounded easy enough: twelve hours to text twelve photos to someone called the Wizard.

For hashtag number five, Lauren needs a #HottieInTheWild, and with the help of her best friend, Ivy, she finds the perfect subject.

The only reason Brenner entered Barkley’s Pub was to have beers with Scott, an Army brother back in town. The reunion is interrupted when a woman is caught crouched in a dark corner, taking pictures of Brenner.

Lauren explains, and though embarrassed, she accepts Scott and Brenner’s offer to help with hashtag number six.While hunting for hashtags, Lauren finds adventure and romance with her #Hottie, but she must stay focused to beat the clock and win the cash.

Snippet:
Lauren pointed to the men in the dumpster. “We’re on a scavenger hunt, but we can step away for a bit if you need closure—” “Closure?” The  drunk coed squinted at Lauren and shook her head from side to side. “Closure is for confused people. I know why it’s over.” She gave her friend a high five and stumbled a few steps toward the open dumpster. “Let’s do this.” She leaned over the contents and lifted a shoebox out of the plastic bin. “I hate him.” She took the top off the shoebox and flung it into the dumpster. It landed between Brenner and Scott. She shuffled through the items and said, “Birthday cards, spring break souvenirs, concert tickets, pictures.” She lifted a photograph and waved it at her friend. She slurred her words when she asked her friend, “Know what really pisses me off? He’s in all my pictures from college. Four years of parties, holidays, vacations, hanging out with friends.” She held the photo in front of her face and swayed slightly. “All my pictures are ruined. I hate him.” “Let me help.” Scott reached down from the dumpster and gestured for the box. “I hate him too.” She returned the photo to the stack and handed the shoebox to Scott. With a turn of his wrist, he dumped all the memories into the trash beside him. “And it’s not like I could show my kids half of my college pictures anyway. They shouldn’t see Mommy dressed like a slutty Stanley Cup two Halloweens in a row.” She reached in the bin, grabbed a handful of silver lamé, and held up a strapless body-con tube dress. “I wore this tiny dress, silver stilettos, and a silver bowl on my head. It was forty degrees. He wore thick hockey pads and his Penguins jersey…lifted me in the air all night.” She balled up the dress and threw it into the dumpster. Her friend looked in the bin and said, “It happened a lot with you two. He’s comfy as hell on Halloween, and you’re half-naked and freezing.” She picked up a gallon-size freezer bag from the plastic bin and stared at the contents. She rolled her eyes and handed it to her intoxicated friend. One by one, the items were tossed into the dumpster. Lauren watched bunny ears, a bow tie, fishnet stockings, and a black leotard fly into the dumpster. The fuzzy bunny tail went in last. She shook her head and said, “What was I thinking?” She reached in the bin for more fabric, unfurling the bottom half of a Princess Leia slave costume. She also grabbed the metal-edged bikini top, neck collar with chain, and hair accessories. “Yeah, I’m keeping this.” The entire costume fell back into the bin. She replaced the lid and let out a sigh when it clicked closed. The friend pulled her in for a hug and said, “Imagine how much more you’ll love the right guy.”