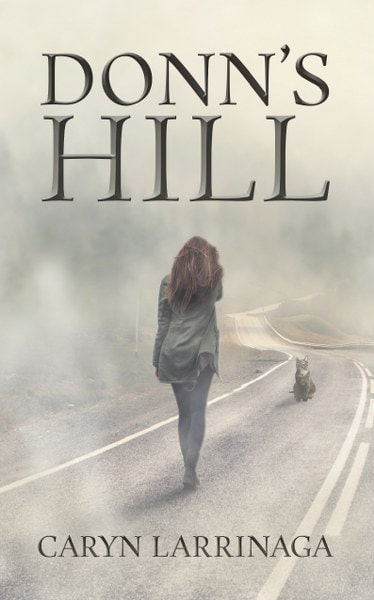 Ghosts. Psychics. Murder. Just another day in Donn's Hill.
Mackenzie Clair needs a fresh start. The death of her father and a broken relationship rendered her old life unlivable. What better place to build a new one than Donn’s Hill, the most haunted town in America and her favorite childhood vacation spot?
But returning to Donn’s Hill awakens more than nostalgia. As memories resurface, so does a lost psychic ability to talk to the dead... a power the poltergeist haunting Mac’s apartment is eager to use.
Aided by her new roommate—a spirited Tortoiseshell cat named Striker—and the ghost-hunting crew of the Soul Searchers, Mac struggles to control her newfound talents. She’d better get a handle on them fast, because someone in town is hiding a deadly secret. If Mac can’t divine the truth, Donn’s Hill will never be the same.
First in a new series, this cozy paranormal mystery was the 2017 winner of the League of Utah Writers Silver Quill award. "A genre-bending gem of a book, cozy meets horror meets cat fancier in a unique town of psychic tourism and ghostly secrets." -Johnny Worthen, award winning author of THE FINGER TRAP, THE BRAND DEMAND and WHAT IMMORTAL HAND
Look for all of Caryn Larrinaga's spooky mysteries featuring psychic Mac and her spirited tortoiseshell cat, Striker!
Goodreads * Amazon

Someone was sitting on my bed. The thin motel mattress shifted as the weight of the intruder pressed down near my side. My body wanted to roll toward the sunken edge of the bed, but I held myself in place, not wanting to touch him. He—and I was sure it was a “he,” though I couldn’t say why—smelled foul, like rotting garbage. But he hadn’t harmed me. Yet. He must be waiting until I wake up. Silence, then, was key. Eyes closed, I held my breath to keep from screaming. I strained my ears for any sound that could explain who’d broken into my room, but only heard the hum of a car passing on the highway. The quiet pressed into me with crushing force. There should’ve been some noise. He had to breathe, right? Or maybe he was holding his breath as well. Maybe we’d unwittingly entered into some kind of lung capacity contest, and the loser would be the one who passed out first. My thigh muscles burned with the strain of holding myself in place, and any second now he’d notice the change in my breathing. I couldn’t keep this up for long. I needed to move while I had the element of surprise. Questions pounded through my mind in time with my thumping heartbeat: Who is he? What does he want? It couldn’t be anything good. People who want to do good things usually knock. Taking a chance, I opened one eye into a narrow slit. The motel room was pitch-black. With my arm under the covers, I crept my left hand toward the nightstand. Slow and steady. Don’t make a sound. Ten minutes seemed to pass before my hand reached the edge of the mattress. Once there, I hesitated—another inch and I’d be exposed. Meanwhile, my stinky burglar was completely invisible. And he’d been sitting in my room for who knows how long, letting his eyes adjust to the darkness. He’d see me the instant I left the safety of the sheets, but I had to chance it. In one motion, I let out my breath and shot my hand toward the lamp switch, flooding the room with light. I sat bolt upright in bed, blinking rapidly as my eyes tried to adjust. Alert and ready to fight for my life, I balled my hands into fists and raised them in front of me, planning to punch the intruder right in the face. My eyes adjusted, and I saw… no one. My heart pounded. Where was he? I stood up and leapt off the mattress. As soon as my feet hit the carpet, I dashed forward toward the squat dresser against the opposite wall, putting as much space as I could between the bed and myself. When I turned on the light the intruder must have rolled beneath the bed, where he was probably planning to grab my feet and drag me under like some kind of boogeyman. To be completely sure, I crouched down and leaned sideways until I could see underneath. A few dust bunnies rested on the dull gray carpet, but no one was lurking in the shallow space between the box spring and the floor. I straightened up and swept the room with my eyes. There was nowhere else he could be hiding; the thick, brown curtains weren’t long enough to conceal someone’s feet. Damn your cheapness, I swore at myself. If I were staying at a cozy B&B in town instead of in this dump, this wouldn’t be happening. If I end up murdered over the price of a hotel room, I’ll be furious. Something creaked in the bathroom. My ears twitched toward the sound like a cat who hears its prey. Of course! He’s hiding in there. I tiptoed toward the back of the room, begging the floor to stay silent beneath my feet and grabbing the iron from the open garment rack as I passed it. It felt sturdy and heavy in my hands; it could do a lot of damage if I brought it down on somebody’s head. The thought was comforting yet terrifying. I reached the back corner and stood in front of the bathroom door, trying to keep my heavy breathing as quiet as possible. My heart banged against my rib cage like a claustrophobe in a closet. This was it. When the door opened, it would be him or me. Channeling my inner Bruce Lee, I raised the iron above my head, kicked the door open, and screamed, “Argh!” which hadn’t been part of my plan. Oh, well. The flimsy door slammed open so hard that the narrow handle stuck in the wall. Just like under the bed, no one was waiting for me here. To be on the safe side, I stepped into the bathroom and opened the cupboard beneath the sink. I didn’t imagine it was big enough to hide a full-grown person, but who knows, maybe a kid could have crept into my room in the night. Or a very flexible ninja. Yet again, I found nothing. I sighed and left the bathroom, deciding it must have been one of those dreams that bleeds into reality—like when you dream that your boyfriend cheated on you, and you wake up with an irrational anger that sticks with you all day. Then I saw them. Two wet footprints lingered between the bed and the wall, right beside where I’d been sleeping. My hackles sprang up. Those footprints definitely didn’t belong to me; they were way too big to be my feet. The carpet was matted and soaked where the prints were, as though the intruder had been sitting there for a while, but I saw no other footprints leading to or away from that spot. 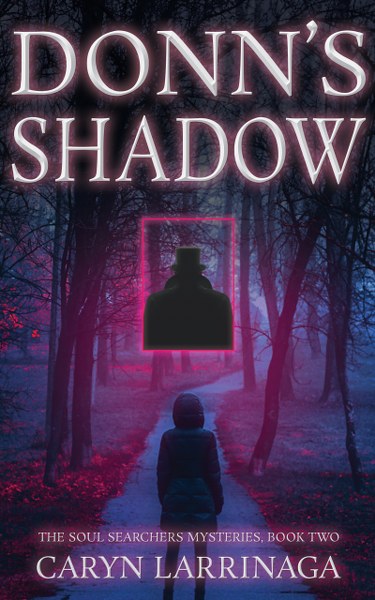 Return to the most haunted small town in America...
Mackenzie Clair finally has this whole ghost-hunting psychic thing figured out. The Soul Searchers are a hit, she’s got pet-parenting down, and she even has a plan to banish the poltergeist running amok at a lakeside cabin. Best of all, Donn’s Hill feels like home. But not everyone loves the town as much as Mac.
A world-famous paranormal debunker thinks the psychics in Donn’s Hill are lying about their abilities. His determination to destroy the Soul Searchers threatens Mac’s livelihood, and when a killer strikes, the sheriff’s suspicions threaten her freedom.
Mac needs all the help she can get to find the real murderer and clear her name… even if that help comes from beyond the grave.
Goodreads * Amazon 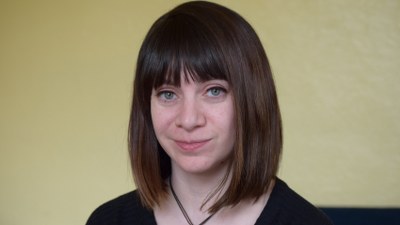 Caryn Larrinaga is an award-winning mystery, horror, and urban fantasy writer. Her debut novel, Donn's Hill, was awarded the League of Utah Writers 2017 Silver Quill in the adult novel category and was a 2017 Dragon Award finalist. Watching scary movies through split fingers terrified Caryn as a child, and those nightmares inspire her to write now. Her 90-year-old house has a colorful history, and the creaking walls and narrow hallways send her running (never walking) up the stairs. Exploring her fears through writing makes Caryn feel a little less foolish for wanting a buddy to accompany her into the tool shed. Caryn lives near Salt Lake City, Utah, with her husband and their clowder of cats. She is an active member of the League of Utah Writers and the Utah Chapter of the Horror Writers Association. Visit CarynLarrinaga.com for free short fiction and true tales of haunted places.