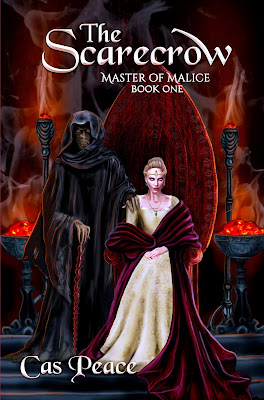 Three years have passed since Baron Reen’s trial. A terrible accident on the island of his exile has transformed him into a nightmarish scarecrow creature with dark, mysterious powers. Staging his own suicide, Reen breaks free of his prison and, with the help of the former queen Sofira, embarks on a ruthless quest for vengeance against his worst enemy, the woman responsible for the overthrow of his schemes and his own ruination: Brynne Sullyan.

Sullyan is tasked with investigating Reen’s suicide. The missing body and a series of disasters in Port Loxton—a vicious murder, a brutal ambush, and a devastating fire—raise suspicions in her mind. She probes deeper, determined to uncover the truth, unsuspecting of the evil that’s about to be unleashed…


This book is on special offer for this week on Amazon!!! Check out the discounted price below!

“Daughter, forgive me, but I must ask you again; are you sure, are you completely sure this is what you want? You haven’t seen him yet, you haven’t spoken with him. I have to tell you, he is not the man you remember, no matter what his letters suggested.” Lerric was sitting with Sofira on the bed in her luxuriously appointed chamber, autumn sunlight streaming through the window. Its warmth helped alleviate the horror he still felt after his earlier meeting with the creature Sofira had begged him to save. The king held fast to his daughter’s hands, mainly to disguise the tremble of his own, but also to convey his intense unease. He looked earnestly into her hard gray eyes and willed her to hear his concern. Despite his fear, he was loath to reveal precisely what had taken roost in that fetid cell far beneath the palace floors. Sofira stared back at him, hearing his care for her, seeing his distress. But it seemed she could not understand his concern, for her brittle eyes glazed with tears. “Don’t you want me to have back what was taken from me, Father?” Her colorless face was animated with hurt. “You know how unhappy I’ve been since I was forced to return here. You know how I ache for my children.” Lerric nodded. “I know it’s been hard for you. At least at the castle Elias allowed you access to them—” “Access?” Sofira snarled. “What use is access to me? Never allowed to be alone with them, never to take them out of my prison, never to walk in the park with them? He doled out time with them as if giving tidbits to a dog, and kept me kenneled like one, too. And I a Queen! How could you condone that?” Lerric thought better of reminding his daughter she had ceased to be a queen when Elias dissolved their marriage. And in light of what she had done—misled by Reen or not, she couldn’t pretend ignorance of the risks she had run—Lerric considered her fortunate not to have suffered the death penalty. Not that he could tell her that, either.