Bestselling Author Bernadette Marie is known for building families readers want to be part of. Her series The Keller Family has graced bestseller charts since its release in 2011. Since then she has authored and published over thirty-five books. The married mother of five sons promises romances with a Happily Ever After always…and says she can write it because she lives it.

When not immersed in the writing/publishing world, Bernadette Marie and her husband are shuffling their five hockey playing boys around town to practices and games as well as running their family business. She is a lover of a good stout craft beer and might be slightly addicted to chocolate.

Everyone deserves one last goodbye. 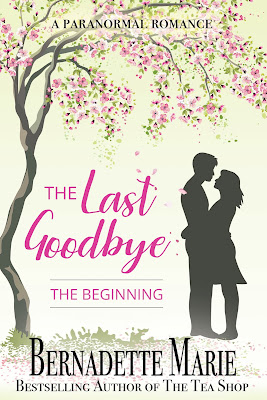 As far back as Grace Carter could remember, she'd been able to communicate with the deceased. Of course, working in her family's mortuary put her in constant contact with those who had crossed over, if she didn't take steps to block them out, which she preferred to do. However, some spirits are stronger than others…

Nora Campbell had nearly been ready to die, but she still had some unfinished business. From the other side, she found the woman she wanted her grandson to fall in love with, and she put her matchmaking plan in motion. Nora was insistent that Grace get a message to her grandson, TV reporter Matthew Campbell, and together they could pass on the last goodbyes of those who had passed.

Only now Grace must convince Matthew she is in touch with his grandmother and not some crazy woman who spends all her time with the deceased.

1. I learned to drive a fork lift at the age of 7
2. A voice coach told me at the age of 17 I had an operatic voice that was 10 years ahead of my time.
3. Princess Leia is my favorite “Disney” Princess.
4. On that note…I’m absolutely addicted to Disneyland (and don’t mind being dragged to Disney World.)
5. I opened my first business when I was just 20 years old and have been in business for myself ever since.
6. I sent my first manuscript for publication when I was 16.
7. I am a 2nd degree black belt in Tang Soo Do.
8. I am a Colorado native, and I’ve never been skiing.
9. I collect vintage lunch boxes which I display in my kitchen.
10. I am horribly unorganized, but people think the opposite (I’m a good faker!)