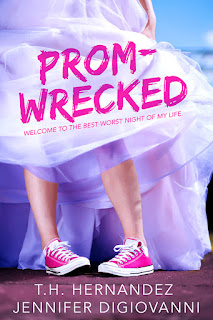 Their prom night ended in a jail cell with forty of their closest friends. But that’s hardly the worst thing that happened to them…

When the principal announces prom is canceled this year, senior Riley Hart is determined to save it. Armed with little more than her own enthusiasm, she ends up working closely with Owen Locklear, who is more than completely off-limits. Because he’s the boyfriend of her ex-BFF, Catherine Reed. Still, Owen knows Riley better than almost anyone, and his charming ideas for turning the prom upside-down and backward win Riley over.

Catherine is willing to join Owen and Riley on the prom committee, but only because her legacy as prom queen is at stake. She’s already suffocating under the weight of her parents’ expectations for after senior year, and compared to that, ensuring prom happens should be easy. At least until everything starts to go wrong.

First they lose their deposit. Then they book a band full of octogenarians. And lose their venue... Twice.

Riley will have an unforgettable teenage experience, damn it, if it’s the last thing she does…

Once the last of the cleaning supplies has been packed away, I’m ready to leave, but Owen’s still messing around with Jeremy. The odor of sweat and animal coats my skin, and I need a shower. Bad. I run my hands through my hair a few times, dislodging a few pieces of straw. “You need to watch out for that Riley chick,” Hunter says, coming up beside me. My blood turns to ice in my veins. This is what I’ve been terrified of all along. As much as Hunter knows me, she doesn’t know how awful I was to Riley in middle school. I’m not sure she’d be my friend if she knew. I swallow hard and turn to face her. “Um, why?” “’Cause she’s got eyes for your boy.” Okay, so Riley was getting pretty chummy with Jordon, but it’s not like I have any designs on him. Sure, we’ve been hanging out more lately, and I discovered that in addition to being cute, he’s funny and apparently honest, at least according to him. “What? We’re just friends. Okay, he’s mildly attractive in a nerd-hot kinda way, but still.” “Who?” “Jordon?” “The drama dork?” She starts laughing. “No, although…” She turns to glance at me, tapping her chin with her index finger as my cheeks burn. “We’re going to have to dissect that statement real soon. I’m talking about your boyfriend. I’m not saying Owen would ever cheat on you, but Riley looks at him like he’s lunch and she’s starving.” My attention is drawn to Riley across the barn as she sneaks peeks at Owen. She’s known him nearly as long as I have. Could she have an unrequited crush on him? It’s not the craziest thing ever. I mean, Owen’s a catch, but he’s with me, and, as far as she knows, we’re the perfect couple. I know they’re still friends, because Owen would never abandon someone due to peer pressure, but I doubt he sees her outside of school any more than I do. Hunter grabs my arm, dragging my attention away from Riley. “I’m telling you this because I think you need to be careful. She rocks that whole girl-next-door vibe, plus, she’s got this vulnerable thing that some guys are really drawn to. Some girls, too,” she says with a playful smirk. My gaze shifts to Owen. He and Jeremy are punching each other on the other side of the barn and laughing like they’re six years old instead of almost eighteen. Could he be into Riley? Again, not the craziest idea. She’s fun, smart, cute. And loyal, unlike me. Hunter glances at her phone. “I gotta go.” She gives my arm a gentle squeeze and pockets her phone. “Talk to you later.” I turn back toward Owen, ready to drag him out of here, when my phone buzzes with a text.

Jordon: All set for tomorrow
Catherine: What time?
Jordon: Any time after 7:30. Can you get out of the house?
Catherine: I’ll come up with something

I slip my phone into my back pocket and return my attention to Riley, who’s talking to some dark-haired band guy, Duncan, I think. Riley and I were once inseparable, until my “friends” deemed her to be an anchor to our rising balloon of popularity in eighth grade. They said either she was out of the group or we both were. Jessa couldn’t even be bothered to come help out today. She said barn cleaning wasn’t for her. And here’s Riley organizing the whole messy operation. Not for the first time, I realize I made the wrong choice all those years ago. Riley lifts her head, as if she can feel me staring, and looks straight at me. I lift my chin a little higher, refusing to glance away first. She holds my gaze for a few seconds before turning back to Duncan, or is it Derrick? But within a few seconds, she’s stealing glances at Owen again. Maybe Hunter’s right. I’m going to have to keep a closer eye on her. The perfect revenge against a former BFF—steal her boyfriend before prom.

Jennifer DiGiovanni writes light fantasy and contemporary fiction for teens. You can find out more about her books by visiting www.jenniferdigiovanni.com or following her on Instagram or Twitter @jendwrites.

T.H. Hernandez is a young adult author of six novels, spanning the contemporary, post-global warming/dystopian, and urban scifi genres. She lives in San Diego, California with her husband, three kids, and a zoo-worthy collection of animals. Her latest release, PROM-WRECKED, was co-written with Jennifer DiGiovanni and releases May 2019 from Entangled Teen.