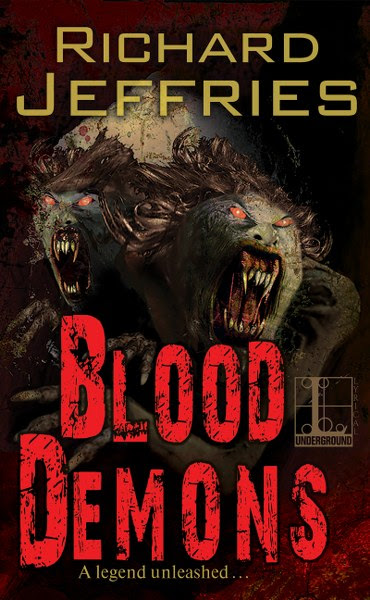 Once again, America is under siege. A devastating terrorist attack has destroyed one of the nation’s most treasured landmarks. With Mt. Rushmore now reduced to a pile of rubble, Major Josiah Key, commander of the secretive Cerberus Unit, is dispatched to hunt down the mastermind responsible: the most fanatically evil extremist the world has ever known. And he’s hidden in the most isolate region of the Hindu Kush mountains of Afghanistan.
Climbing to the fiend’s remote, mysterious caves, the four-person Cerberus team encounters bloodless corpses that lead them to confront one of the greatest evils in human history: the Vetela . . . unholy creatures who inhabit the bodies of the dead and the source of all vampire legends. Their sole purpose is to guard the terrorist, and with his help, the Vetela, are finally ready to come into the light and lay waste to all humanity.

All he could do was stare. Her beauty was cathartic, even hormonal.
She smiled, making him feel even weaker. “Do you think I am a dream?” she asked. “Do you think all of this is a dream?” She motioned gracefully at the surroundings. “Do you think it has all been a dream since the moment you became aware?”
When she glanced away, it gave him the power to answer, despite the gasping weakness of his reply. “A nightmare.”
Her smile widened and became more believable. “For you, I’m sure it was.” She lowered, and shook, her head demurely. “But I can assure you it is not.” When she raised her head again, her eyes locked on his. “When your master was beheaded eons ago, a deity took pity on him, for he was once a proud warrior. The deity quickly replaced it with the first head that could be found.” She shrugged sadly. “But what do gods know, or care, of mortals? The result was grotesque, and people became ill and terrified at the sight. So he took refuge in graveyards—”
“Like me,” Craven realized.
The woman’s smile became tender and knowing. “Like you. So tell me. You have told him, so now tell me. What is it you want?”
Craven was not intimidated by her question. In fact, quite the opposite. He suddenly felt superior to her. She must be Tajabana, he realized. Freshly made. Her awakening hunger must be enormous. It had to be the only reason she would dally with him.
“Power,” he answered, perhaps being truthful for the first time in his life. But not insightful.
She laughed. Although he reacted at first as if she were mocking him, he immediately realized that her laughter was honest.
“Oh, my dear fellow,” she said sympathetically as she took her first step toward him. “You’ll have to do better than that. Now really, what is it that you truly want?”
“Power,” he repeated as her lovely, elegant hand reached for his scalp. “Over innocence.”
The forefinger of her other hand caressed his cheek, turning his face from hers. “That’s better,” she assured him, her fragrant breath making his flesh crawl. “Although I cannot guarantee you that, there’s one thing I can do—”


He was tempted to inquire further, but then her tongue was at the back of his head, at the exact spot where his skull met his spine. Then, there, on the banks of the Ganges River where his mother had died, Craven was set free.

Richard Jeffries holds a degree in Creative Writing, obtained before he went to work for American intelligence. He has seen the world—and things in it—which inspired the writing of these novels. Now retired from covert ops, Jeffries divides his time between rural Connecticut and London. In his spare time he pursues his lifelong interest in Kung Fu and classical piano.