Murder, She Knit - A Knit and Nibble Mystery Book 1 by Peggy Ehrhart Book Tour and Giveaway :) 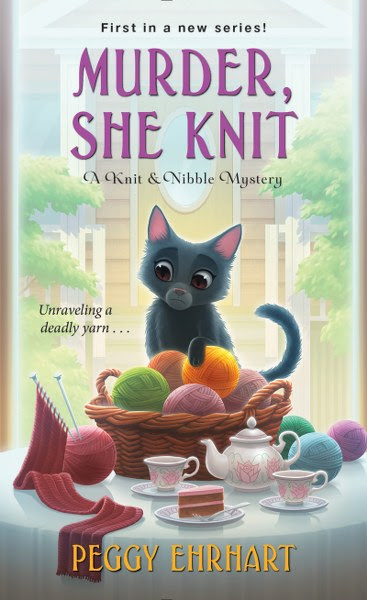 Since her only daughter left for college, widow Pamela Paterson has kept busy as associate editor of a craft magazine and founder of the Knit and Nibble knitting club in quaint Arborville, New Jersey. Now, she’s trying out a new hobby—solving murders!


Pamela is hosting the next Knit and Nibble meeting and can’t wait to liven up her otherwise empty home with colorful yarn, baking, and a little harmless gossip. She even recruits Amy Morgan, an old friend who recently moved to town, as the group’s newest member. But on the night of the gathering, Amy doesn’t show. Not until Pamela finds the woman dead outside—a knitting needle stabbed through the front of her handmade sweater . . .
Someone committed murder before taking off with Amy’s knitting bag, and Pamela realizes that only she can spot the deadly details hidden in mysterious skeins. But when another murder occurs, naming the culprit—and living to spin the tale—will be more difficult than Pamela ever imagined . . .
Knitting tips and delicious recipe included!

Pamela glanced around for the cat-food dish. It was nowhere to be seen on the porch. Reluctant to have a plastic dish littering her yard as early risers passed on the way to bus stops or school, she headed down the steps. Between the full moon and the streetlamp, the yard could be seen clearly. The front walk was a silver ribbon of concrete, with a few fallen leaves scattered here and there. The lawn was a soft gray, mottled with more leaves. That soft gray darkened into the shadows along the hedge that divided Pamela’s yard from the property of the church next door. Pamela ventured onto the lawn, puzzled about where the dish could have gotten to. Catrina was often so enthusiastic about her food that Pamela had watched through the oval window in the front door as the cat nudged the dish across the porch floor and down the steps. Well, she decided, the dish clearly wasn’t littering the lawn. It would turn up in daylight, and if not, a plastic dish was no great loss. But as she turned toward the house to go back in, she noticed a flash of white among the shadows under the hedge. Pamela’s porch spanned the front of her house, and between the porch and hedge there was only a narrow corridor leading past the side of the house and into the backyard. Had Catrina pushed the cat-food dish all that way in search of a private place to enjoy her meal? Pamela hurried across the lawn toward the white spot, laughing to herself about the proclivities of this wild little creature that had come into her life. But as she got closer, she stopped. She wasn’t looking at a plastic dish, but at a human hand, palm slightly cupped and facing upward. Too shocked to feel frightened, she bent to look closer. The hand emerged from a sleeve whose dark fabric blended with the shadows. She pushed the unruly branches of the hedge aside, and moonlight illuminated the motionless face of Amy Morgan, still beautiful even in what was quite obviously death. Amy’s coat had been unbuttoned and peeled back, revealing a pale sweater whose distinctive texture showed it to have been knit by hand. But its pale color had been stained by a large, dark patch centered to the left of the buttons that marched down its front. Protruding from the center of the stain was what looked like a knitting needle. Pamela bent closer. Yes, it was undoubtedly a knitting needle, its metal surface gleaming in the moonlight. She pushed more branches aside, and Amy’s legs and feet came into view. She’d have to call the police. But just then she couldn’t move. 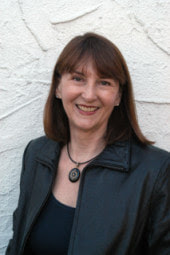 Peggy Ehrhart is a former English professor who lives in Leonia, New Jersey, where she writes mysteries and plays blues guitar. She holds a Ph.D. in medieval literature from the University of Illinois and taught writing and literature at Queens College, CUNY, and Fairleigh Dickinson University, where she was a tenured full professor. Her short stories have appeared in Futures Mystery Anthology Magazine, Crime and Suspense, Flashing in the Gutters, Spinetingler, Crime Scene: New Jersey 2, and Murder New York Style. A longtime member of Mystery Writers of America and Sisters in Crime, Peggy served on the board of MWA New York as head of the Mentor Committee. She was president of Sisters in Crime NY/TriState from 2013 to 2015. Peggy regularly attends mystery writing conferences and participates in conference panels and also gives talks on mystery fiction at libraries in New York, Connecticut, and New Jersey.