Snapshots From My Uneventful Life by David Aboulafia Book Tour and Giveaway! 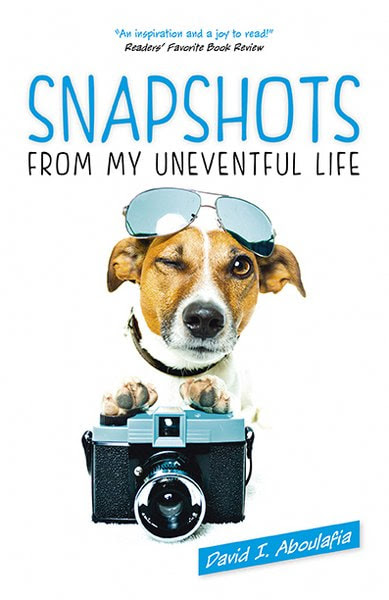 In this hysterical, irreverent and sometimes thought-provoking collection of essays, the author takes us on a journey through everyday, real-life events that started out as “uneventful,” but wound up being anything but. “Snapshots” is a book that everyone will identify with, and that will have you holding your stomach with laughter and scratching your head in wonder!

SNAPSHOTS FROM MY UNEVENTFUL LIFE
"A Funny Gag, But No Laughing Matter"
POOR COCO, my one-year-old, chocolate brown, 65 pound, positively loony Standard Poodle, was about to get his balls chopped off.
Look, there’s just no delicate way to describe it, and I’m not sure whether I should tiptoe around anything or sugar coat the true nature of the event. Employing a more acceptable term such as “neuter” would not alter the graphic significance of such a procedure, at least to any human male.
While convinced of the necessity for this long ago, and despite the sage assurances of the capable veterinarians we consulted (who, I assure you, would just as quickly have recommended the de-balling of my canary or koala), I could not shake the disturbing notion that my loving pet’s very soul would be affected in some way.
Maybe he would come out of surgery like a Stepford wife, or like one of those pod people who are just like the humans they replace, except that they’re not.
That bothered me. That, and the fact I couldn’t even discuss the issue with the vet without two hands shielding my gonads. Hey, don’t wave a red flag in front of a bull, if you know what I mean.
Anyway, my wife took him to the vet that day. Before Coco left, I approached him with bowed head as if he were going to the gallows. I said I was sorry I had failed him, that I had done everything I could, but, that it would be over quickly, and he wouldn’t feel a thing.
French poodles are among the smartest dogs on the planet, and Coco is no exception. He is also a crap expert, as most dogs tend to be, and is fully able to recognize it when it is exiting the mouth of his human. He looked at me with disdain and disbelief, snarling at my disingenuousness, and I didn’t blame him a bit.
The task of retrieving my pup fell to me several hours later. This is a duty that has always caused me great pain and anguish. How it is possible that a man gets as anxious over the health of his dog as the health of his children I cannot imagine, but I do. I drove to the vet with feelings of dark anticipation and dread.
My anxiety expresses itself through my comedy, I suppose, or in the attempt, at least. I guess it’s a way of expelling bad thoughts. I entered the clinic and approached the five sweet-but-always-distracted female administrators who crowded the small area that was the front office. Separating them from the patient waiting area was a four foot high barrier, which they no doubt thought steep enough to fend off any large beast weighing more than any of those sheltered behind it.
“I’m here to pick up Coco,” I announced stoutly. “I believe that he was spayed,” I added.
On the one hand, I was quite proud of my use of complex medical terminology. On the other hand, I didn’t mind disclaiming a precise awareness of the procedure, so I would at least have culpable deniability if anyone were to think me cruel or unfeeling for having so mercilessly mutilated my pet.
“You mean neutered, I hope,” pleaded one of the oh-so-kind assistants, reminding me that the term “spay” is most often used in connection with the female of the species. She spoke with a curious narrowing of her left eye as if to assess whether I might have brought the animal in for a sex change.
“Oh, yes, I’m sorry,” I cheerfully agreed. Wishing to clarify the matter, I simply added that Coco had been brought in to get his balls chopped off, and that was the long and the short of it.
As you can imagine, this remark was received with some disapproval.
Then, I got an idea. I giggled to myself. I forced myself serious, and looked around to see if any- one was in earshot of my thoughts. Finding no one – and somewhat disappointed - I leaned forward.
“May I ask you something?” I inquired of the wholly efficient two-kids-three-cats-mom assistant in front of me.
“Of course,” she replied.
“Can I keep them?” I asked.
Everyone in the office area stopped what they were doing and looked up.
“Excuse me?” she asked.
Timing was everything, and I knew it. I floated a pregnant pause and replied.
“Can I keep them?” I repeated.
“You want to keep them?” she asked.
“Yes…well, actually, it’s my wife who wants them.”
“Your wife?”
Everyone was at full attention now, and I had achieved what I had set out to; namely, to make a complete spectacle of myself.
“Yes,” I replied. “She wants to keep them in a jar on the mantle.”
“In a jar?” she asked with some astonishment.
“Yes,” I repeated.
“On the mantle?” she asked.
“Yes….” I replied, and quite eagerly, now. I was ready for my close-up, baby; ready to deliver the punch line.
“She wants to display them right next to mine,” I added happily.
Well, I thought it was funny. Most of my audience laughed, getting the gag. 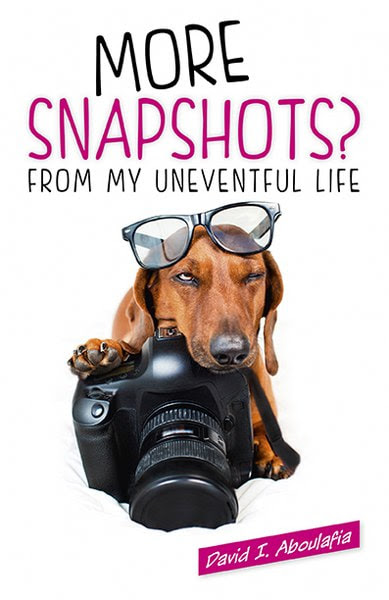 More Snapshots? From My Uneventful Life

More Snapshots is the cheeky sibling of its predecessor Snapshots From My Uneventful Life. Chatty, hilarious and often poignant, David I. Aboulafia takes us on a journey through every day, real-life events that start out as uneventful, but that wind up being anything but… 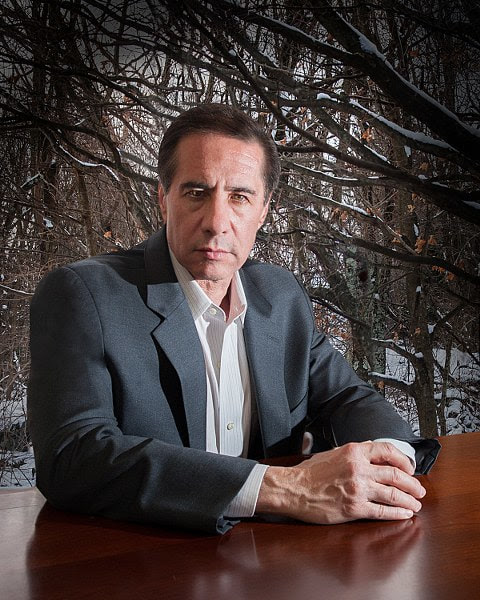 DAVID I. ABOULAFIA is an attorney with a practice in the heart of New York City. He spends the wee hours of the morning writing books that terrify and amuse. His days are spent in the courts and among the skyscrapers, and his evenings with the trees, the stars, his wife and his dog in a suburb north of the City.