Til Death Do Us Party - A Liv and Di in Dixie Mystery #4 by Vickie Fee Book Tour and Giveaway :) 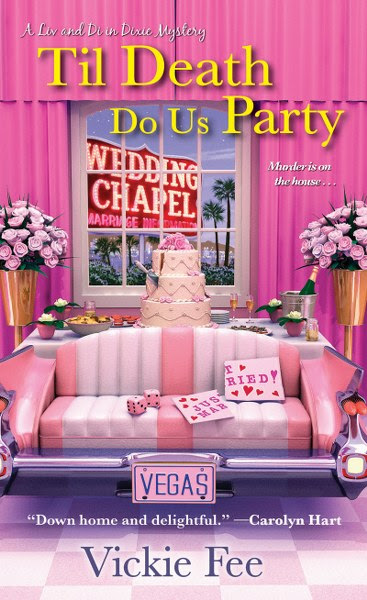 Til Death Do Us Party
A Liv and Di in Dixie Mystery #4
by Vickie Fee
Genre: Cozy Mystery

Las Vegas knows how to party, and for once, event planner Liv McKay won’t be entirely behind the scenes. The Dixie gang is in Sin City to celebrate Mama and Earl’s rockin’ Elvis-themed wedding. And between juggling the botched bachelorette party and a problem-plagued soirée back home, Liv’s ready to double down on some fun.


Mama & Earl’s happily-ever-after seems like a sure thing, but all bets (and nuptials) are off when they get to the Burning Love Wedding Chapel. Their Elvis-impersonating minister has left the building . . . permanently. And even worse, Liv’s cousin, Little Junior, is suspected of his murder.
With Mama’s happy ending on the table and Little Junior about to lose it all, the stakes are higher than ever. Liv and her best friend, Di, must hit the Strip to find the real killer before he finally plays his ace...
“High energy, dead bodies and exposed lies. . . . A must read."
—RT Book Reviews, 4 Stars, on Death Crashes the Party
“A wonderful cozy mystery.”
—Suspense Magazine on It’s Your Party, Die If You Want To
“Readers should welcome this look at a very Southern lifestyle, complete with appended party plans.”
—Kirkus Reviews on One Fete in the Grave

“Dearly beloved, I want to thank you all, thank ya very much for gathering here today. Earl couldn’t
help falling in love with Virginia and wants to be her forever teddy bear.”
The minister’s intro elicited smiles and chuckles from our little congregation, but his voice was a bit shaky. Looking more closely, I could see his face was bathed in sweat.
“And the two of them have decided it’s now or never for them to be joined in the noble estate of matrimony,” Steve said, looking unsteady on his feet and gently swaying from side to side. He suddenly stopped and gasped. His face took on a bluish tinge and I thought he might be having a heart attack.
His body seemed to spasm. With another gasp, he fell to the floor.
Dave rushed to the front and knelt down beside Steve. After checking for a pulse, he began to perform CPR and called out for someone to dial 911, and for someone else to check with the desk to see if they had a defibrillator on the premises. Di dialed 911. Larry Joe rushed out of the chapel. And Mama crumpled onto the chair next to me, sobbing.
Taylor rushed into the chapel after Larry Joe had asked her about the defibrillator. She looked down at Steve as Dave valiantly continued with CPR.
She began to sob, her shoulders shuddering, when it seemed apparent he was beyond reviving. Dave continued CPR until the EMTs arrived. He stepped away to let them take charge, then he turned to us and shook his head. I had given my seat to Earl, who had his arm around Mama with her head on his shoulder. Obviously, having the minister drop dead during the ceremony had put a damper on the wedding.
The police had arrived just after the paramedics and had taken a statement from each of us, not that there was much we could tell them. As the cops were taking statements I couldn’t help noticing Crystal, who had previously dated Steve, was shedding no tears. Little Junior, who wasn’t a fan, was surveying his surroundings as if he was studying the sparse decor. I imagined he was thinking there might be an opening for him now as a minister at the Burning Love Chapel. Looking around, I noted that the photographer had apparently slipped out of the chapel at some point during all the hubbub.
The police officer took our contact information and said that an autopsy would have to be performed. But all indications were that Steve had suffered a heart attack.
The paramedics had rolled the deceased out on a gurney and the cop was standing in the doorway to the chapel chatting with Dave.
Taylor may have broken down in tears when she saw Steve lying on the floor, but she composed herself enough to talk business.
She apologized to Mama and Earl and asked if they would like to reschedule.
“I’m sure this has been upsetting, but I know you’re only in town for a limited time. If you want to go ahead with a wedding today, we do have an opening at eleven p.m. tonight in one of the other chapels. Of course, there would be no additional charge for the larger space.”
Mama and Earl looked at Taylor in disbelief. For once my mother was speechless. Earl spoke up.
“Thank you, but I don’t think Virginia and I are in any frame of mind to continue with the wedding tonight.”
“Of course. Just give me a call when you’re ready.”
Taylor started to walk away, but stopped and turned back to face the nearly wedded couple. “Oh, by the way, take the rose arrangements with you, if you like, since you’ve already paid for them.”
I wanted to get up and smack Taylor for her appalling lack of sensitivity. But Little Junior rushed over to Mama and offered to carry the flowers out to the car if she wanted them.
“Sure, hon, if you want to,” Mama said blankly.
I assumed my cousin was just eager to do something nice for Mama and toting flower pots was the best he could come up with. He and Crystal walked to the front to retrieve the floral arrangements. When Little Junior picked up the vase from one of the two pedestals, something shiny tumbled to the floor with a metallic thud.
The cop stopped his droning conversation with Dave midsentence and walked to the front of the chapel to have a look. He pulled a handkerchief out of his pocket and picked up a silver-colored flask. He held it up, examining it more closely, then left the chapel without a word.
We assumed we were free to go.
My in-laws got into the Winnebago with Mama and Earl. The rest of us piled into the vintage pink Cadillac. Little Junior got behind the wheel and Crystal sidled up to him. Di climbed in the front seat next to Crystal and Dave got into the backseat.
Larry Joe and I exchanged a puzzled look before sliding onto the backseat, with me in the middle.


The ride back to the hotel felt like a funeral procession. 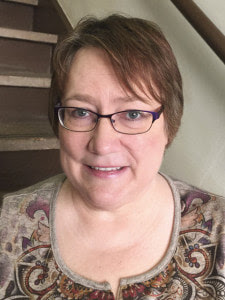 Vickie Fee is a past president of the Malice in Memphis chapter of Sisters in Crime and current member of the Wisconsin Sisters in Crime. She has a degree in journalism and spent many years as a newspaper reporter, covering small Southern towns populated with colorful characters, much like those in the fictional town of Dixie. She now lives in Michigan’s Upper Peninsula with her husband, John. She grew up in the South on a steady diet of Nancy Drew and iced tea, and when she’s not writing, Vickie enjoys reading mysteries and watching B movies from the 1930s and ‘40s.