Lords of the Greenwood by Chris Thorndycroft Blog Tour and Giveaway :) 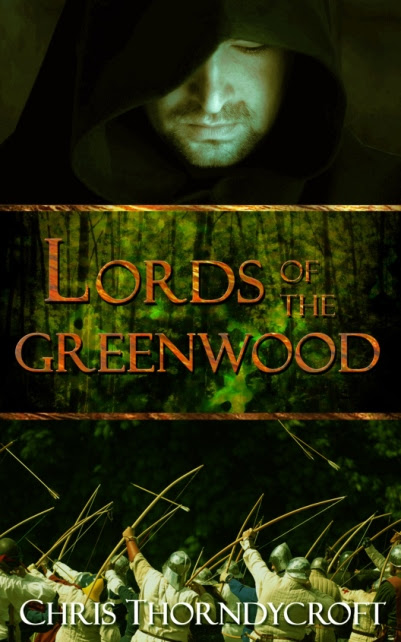 Lords of the Greenwood by Chris Thorndycroft

Nottinghamshire, 1264. England is on the brink of civil war. The barons are in revolt against King Henry III. Such times suit Roger Godberd, sergeant in the garrison at Nottingham Castle. After throwing in their lot with the barons who embark on a bloody campaign for control of England, Roger and his companions are betrayed and seek refuge in Sherwood Forest. There they begin their new lives as outlaws evading their old enemy, the High Sheriff of Nottinghamshire. Yorkshire, 1320. Wrongfully accused of murder, young Robert Hood of Wakefield finds himself outlawed with only his bitter enemy Will Shacklock for company. Taking to the woods of Barnsdale, Robert and Will agree on an uneasy truce and begin recruiting a band of robbers fleeing the chaos of the Earl of Lancaster’s rebellion against King Edward II. Eventually drawing the attention of the king himself, Robert and his band are given a choice; be hanged as common criminals or enter the king’s service as agents of the crown… Blending real history with medieval ballads this is the entwined saga of two men, separated by a generation, united by legend, who inspired the tales of England’s famous hooded outlaw.

Chris Thorndycroft is a British writer of historical fiction, horror and fantasy. His early short stories appeared in magazines and anthologies such as Dark Moon Digest and American Nightmare. His first novel under his own name was A Brother's Oath; the first book in the Hengest and Horsa Trilogy. He also writes under the pseudonym P. J. Thorndyke. For more information, please visit Chris Thorndycroft's website. You can also find him on Twitter and Goodreads.

During the Blog Tour we will be giving away two eBooks of Lords of the Greenwood! To enter, please enter via the Gleam form below. Giveaway Rules – Giveaway ends at 11:59pm EST on April 20th. You must be 18 or older to enter. – Giveaway is open INTERNATIONALLY. – Only one entry per household. – All giveaway entrants agree to be honest and not cheat the systems; any suspect of fraud is decided upon by blog/site owner and the sponsor, and entrants may be disqualified at our discretion. – Winner has 48 hours to claim prize or new winner is chosen. Lords of the Greenwood