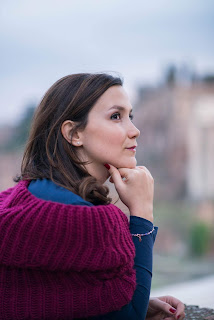 Born just outside of Rome, Flavia Brunetti grew up bouncing back and forth between Italy and California, eventually moving back to the Eternal City and confirming her lifelong commitment to real gelato.

Flavia holds a Master of Arts degree in Government and Politics from St. John's University and a Bachelor of Arts in Political Science from John Cabot University.
Today she travels the world working for an international humanitarian organization and spends her free time writing and wandering around her beloved Roma in constant search of bookstores and the perfect espresso.

You can find her city blog on Rome at whichwaytorome.com and her portfolio of published writing at flaviinrome.com. 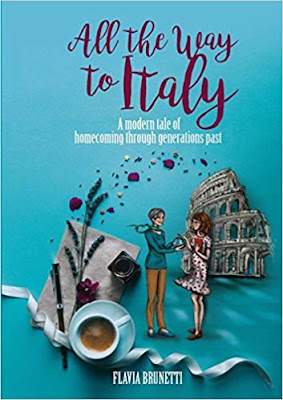 Until her dad died, Little considered herself a Californian. Now, thanks to half a letter, a symbol she can't quite remember, and writer's block, she finds herself back in Italy, the country of her birth. In a headlong rush to return to her beloved San Francisco, Little will travel throughout Italy, enlisting the help of the aunt who raised her, friends old and new, and the country itself, in her search for the answers she needs.


This is the powerful story of those in search of a balance between wanderlust and the necessity to come home, a reminder that although we may be fragments, we are never a lost cause.

This is a story for the third generations (the fourth, the fifth, the sixth generations), for the not-so-lost generations, for the hybrids. For the people who feel more at home in an airport than they wish they did, who yearn for one place to call home but also always, inevitably, long for something they do not know, miss places they have yet to behold, people they have yet to meet. This is for the ones who have grown up checking if the gate has changed, who have both struggled with and embraced transience, have learned to find themselves in the moments in between, that have found a place to belong in the very un-belongable (I just made that a word). This is for the ones who always say goodbye, who have learned too well how to keep tears from falling until they’ve gotten through Security. The ones who cry inconsolably when they get on that plane but are always ready to say hello on the other side. For the ones who hear the sea even in the rumble of the 747 as it wakes up, who have chosen freedom but know that they have placed their roots everywhere, not nowhere. Everywhere, in the laugh of the friends they never forget, in the people that wait for you at Arrivals even when your flight is nine hours late and you stumble off the plane in the middle of the night during a thunderstorm. Lifetime friendships, your blood runs in my veins friendship.