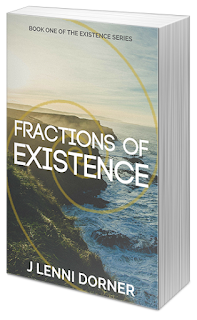 Once they were humanity's exalted protectors— now they are being hunted.

Xavier will weigh all human life against Gwendolyn's ignorant happiness.
The good news is that her choice can blow his away.

Omnipotent beings find each other while playing an online game. Xavier has been searching for Gwendolyn, his true mate and the missing member of the Existence. Only if reunited can the group regain the rest of their memories and access all of their powers. Hidden in plain sight, disguised as humans, they help who they can, as best they can, when they can.

The Eyes in the Shadows, a religious sect, has been trying to free humans from the “prison” of life on Earth for millenniums. The Existence has always been able to thwart them… until now. They've discovered a way to end the world that no one will see coming.

Gwendolyn has her future all laid out. There is a plan. She knows what her parents want for her and how to get it. Then Xavier, a friend from a virtual game, makes her question everything. He's full of secrets, one being an understanding of her fear of the wind.

She tries to suppress her intense attraction to the mysterious and frustrating Xavier. She's engaged, after all, and the thoughts she's having aren't proper. Gwendolyn is swept into a whirlwind of secrets, danger, and a forbidden attraction. She'll drive across the country in her beat-up old car, not knowing if he is genuinely interested or just being polite. (He refuses to kiss her!) Gwendolyn's journey is full of self-doubt, sacrifice, and dark visions that invade her sleep. Will she uncover the truth about herself? 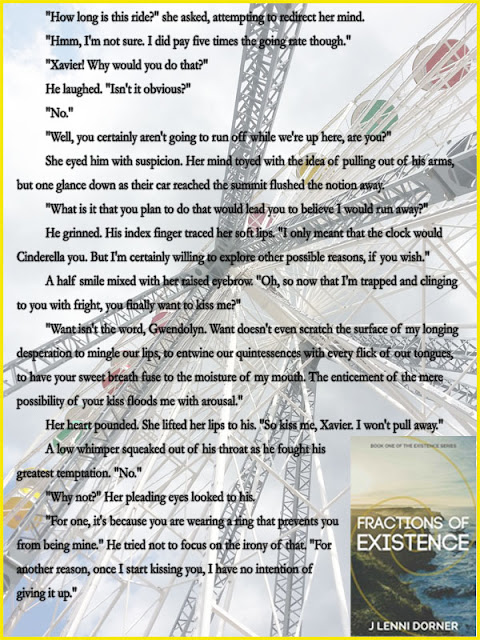 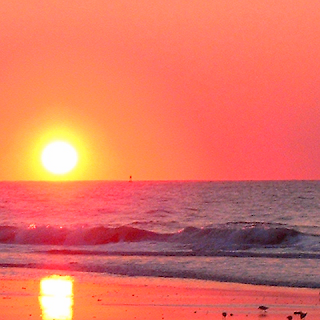 J. competed in Write Club 2014 &2016. The Creative Writing Institute held writing contests that resulted in J Lenni Dorner being published in "WRONG!: A themed anthology 2014" and LOST!: A themed anthology 2017. J self-published "Preparing to Write Settings That Feel Like Characters," in 2015. Winner of the Write Edit Publish Now flash fiction "Youthful Frights versus Adult Fears" Halloween challenge 2015. Signum University's Mythgard Institute held a creative writing contest in the autumn of 2015 called "Almost an Inkling" in which J Lenni Dorner was the Popular Vote Winner of week 6, resulting in publication in The Soul of Wit. The Operation Awesome Flash Fiction Contest 12 win in April 2016 went to J Lenni Dorner.

When not reading or writing, J enjoys video games, laughing at funny cat videos, finding drawings of dragons on Pinterest, and watching movies.

Here are some reasons why readers love Fractions of Existence:

● There’s a forbidden romance. And there’s some non-romantic sex.
● There’s a rescue scene.
● It’s an urban fantasy, but not like the most populary-written ones. ( http://jlennidornerblog.what-are-they.com/2017/05/30/genre-for-book-marketing ) Fractions of Existence lacks mention of vampires, detectives, orphaned main characters, magic users, dragons, butt-kicking female loners (Jez isn’t really a loner), a butt-kicking normal human who plays with paranormals (Wend isn't really normal), or protagonists who hunt paranormals for vigilante justice (that's the antagonists, and they don't want justice). It IS an urban fantasy, just not that kind of urban fantasy.
● It’s a diverse book! There's a MC with an underrepresented body type (Wend), a MC of color (Heath), a part Japanese character (Jun), and a contemporary world arranged marriage (Wend and Tred). J Lenni Dorner is a Native American author. #WeNeedDiverseBooks
● Xavier is the main character in the beginning, but Gwendolyn is the main character at the end. #GirlPower
● The main characters are in their early twenties, thus making it a New Adult book. (The sensual scenes, some language, and a few scenes with drugs and alcohol also put it in this category. The real kicker is Gwendolyn’s student loans.)
● Those who have roleplayed in a MMORPG setting, especially the old text-based chat games, love this story.
● There are historical scenes.
● The Existence series starts off as a pre-dystopian.


● Some people love that the Fractions of Existence characters leave them with the mystery to figure out: WHAT-ARE-THEY ( http://www.what-are-they.com )