Of Blood and Ashes - Of Cinder and Bone Book 2 by Kyoko M Book Tour and Giveaway :) 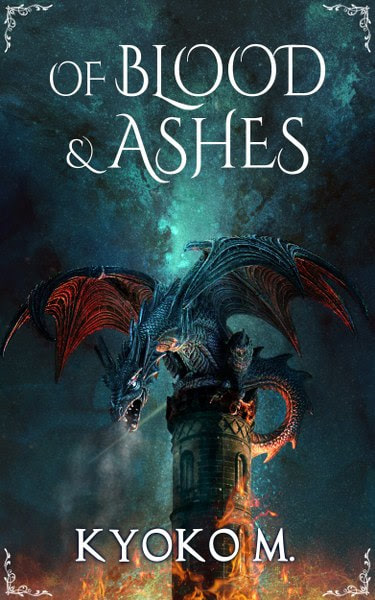 Of Blood and Ashes
Of Cinder and Bone Book 2
by Kyoko M
Genre: SciFi Fantasy Romance

The world's deadliest dragon, the infamous Baba Yaga, is loose on the streets of Tokyo.

Dr. Rhett "Jack" Jackson and Dr. Kamala Anjali have been tasked with helping the government take down a dragon the size of a Tyrannosaurus Rex after it sends part of the city up in flames. Things worsen when they lose track of dragon in none other than Aokigahara, the Suicide Forest--a section of woods in Japan that is rumored to be one of the most haunted places on earth. They've also got the yakuza who cloned the dragon hellbent on getting her back, and they don't care who they kill in order to re-capture the dragon.

Jack and Kamala are joined by CIA field agent William Fry and dragon-hunting expert Juniper Snow as they infiltrate the forest to hunt the dragon before she can hurt anyone else. Between the ruthless yakuza hot on their trail and the growing mistrust in their small hunting party, it will take a miracle for Jack and Kamala to make it out alive...
Of Blood and Ashes is the second book in the series, following the Amazon bestselling Of Cinder and Bone.

“Matt,” Bianca said, pointing to the screen. “Look. They’ve got the choppers in the air finally.”

She hit the Mute button to disable it and the sound came rushing back into the room. The female news anchor still looked shell-shocked, but as if she’d finally gotten ahold of herself. “The Tokyo police and animal control have collaborated in a city-wide hunt for the creature, who has now claimed at least eleven lives with more than twice that injured according to a current report. Baba Yaga was last sighted in the Akihabara district, and now that air support has arrived, we are hoping that they’ll be able to subdue the creature before it can cause more damage.”

The anchorwoman faded out as the live news from a major Tokyo news channel dissolved in and showed the smoldering remains of the cars below, as well as plumes of smoke drifting up from burning buildings. The English translator said that these attacks happened within the last fifteen minutes, which led them to believe the dragon was still within the vicinity. The camera swept along the brightly lit skyline and over the traffic choking the city streets. People scurried away from the direction the helicopter was headed towards, some abandoning their cars, others rushing into nearby businesses to take cover.

At last, the camera swung up to a six-story building with bright orange and blue neon signs of the Sega logo and long glass windows above it. It focused intently at the roof where there appeared to be a dark shape. The helicopter’s spotlight splashed across glittering smoke-grey scales and then two bright yellow dots glowed like twin cinders in a mound of ashes.

Baba Yaga uncurled her long, titanic form and roared into the night.

The roar made the camera’s audio levels shriek from the sheer volume. It sounded like the blast from a thousand trumpets mixed with the bone-shaking growl of a crocodile. The hairs on Jack’s arms stood up beneath his shirt, and even thousands of miles away from the danger, he felt the urge to flee at the terrifying bellow.

The dragon fixed her citrine eyes on the helicopter and snarled as she crept towards the ledge of the GiGo Sega arcade building. Clear liquid dripped from her open jaws and burst into flames at her massive clawed feet. Greyish-brown webbed skin reflected light as she stretched her mammoth wings and leapt into the air, heading straight towards the camera.

Panicked voices spoke as the helicopter wheeled wildly to the right, seeking to get lost behind another building as the dragon gave chase. A man in SWAT gear shouted at the pilot to hold steady as he aimed a sniper rifle out of the open hatch, sighting down the barrel at the reptile as it glided after them. Baba Yaga belched a mouthful of fire that just barely missed the tail of the helicopter and the sniper gripped the edge of the door, grimacing as it ruined his shot.

The skyline tilted underneath them as the helicopter climbed higher above the city, hoping to get lost in the cirrus clouds of the night sky. The dragon vanished from sight a moment later and nothing but darkness billowed beneath them as they flew. The translator said they lost visual and would now rely on radar to stay out of the dragon’s reach. The camera man climbed towards the front seat and focused on the electric-green blips on the console, depicting an ominous blob following their position.

The sniper said he had a shot, and told the pilot not to change their course yet. He pulled the trigger. The camera man wheeled around to try to catch the footage, but was too late; nothing but darkness and clouds blurred past them. The pilot said she was outside of their radar and asked if the sniper could confirm that he’d hit his target. The sniper said he saw the dragon drop out of the air and grabbed his walkie-talkie to speak to his commanding officer.

A sharp beeping sound filled the cabin of the helicopter and the pilot threw his weight forward onto the joystick. They narrowly missed an enormous plume of fire as Baba Yaga came charging at them from below. It threw the sniper to one side and he lost his balance, clinging to the strap in the cabin as they fell a hundred feet within seconds. The camera man lost control of the set and it smashed against the floor of the cabin, lodged beneath one of the seats.

It gave everyone watching the chance to see Baba Yaga snatch the sniper out of the helicopter and bite him clean in half.

The feed abruptly cut there. The American anchorwoman returned, flustered and shaken, as she told everyone that they lost the signal. 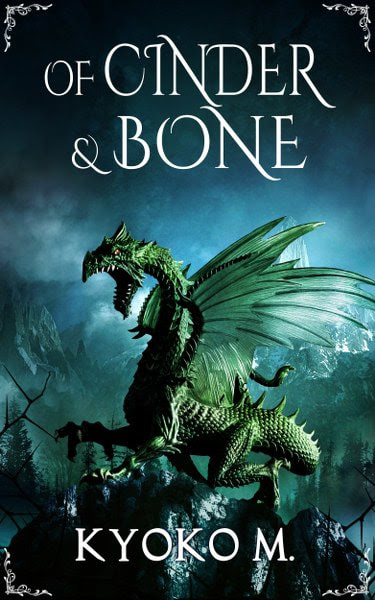 After centuries of being the most dangerous predators on the planet, dragons were hunted to extinction. That is, until Dr. Rhett “Jack” Jackson and Dr. Kamala Anjali cracked the code to bring them back. Through their research at MIT, they resurrected the first dragon anyone has seen alive since the 15th century. There’s just one problem.

Caught between two ruthless yakuza clans who want to clone the dragon, Jack and Kamala brave the dangerous streets of Tokyo to steal their dragon back in a race against time before the world is taken over by mutated, bloodthirsty monsters that will raze it to ashes.

Of Cinder and Bone is an all-new sci-fi thriller from the author of the Amazon bestselling Black Parade novels. Don’t miss out on this explosive first-in-series! Fans of Westworld, I Robot, Pacific Rim, and Reign of Fire will fall in love with this mashup novel that opens up a whole new world of possibilities into what we know and love about dragons.

**FREE at Amazon and Smashwords!!**
Add to Goodreads
Amazon * Smashwords

Kyoko M is a USA Today bestselling author, a fangirl, and an avid book reader. She has a Bachelor of Arts in English Lit degree from the University of Georgia, which gave her every valid excuse to devour book after book with a concentration in Greek mythology and Christian mythology. When not working feverishly on a manuscript (or two), she can be found buried under her Dashboard on Tumblr, or chatting with fellow nerds on Twitter, or curled up with a good Harry Dresden novel on a warm Georgia night. Like any author, she wants nothing more than to contribute something great to the best profession in the world, no matter how small.