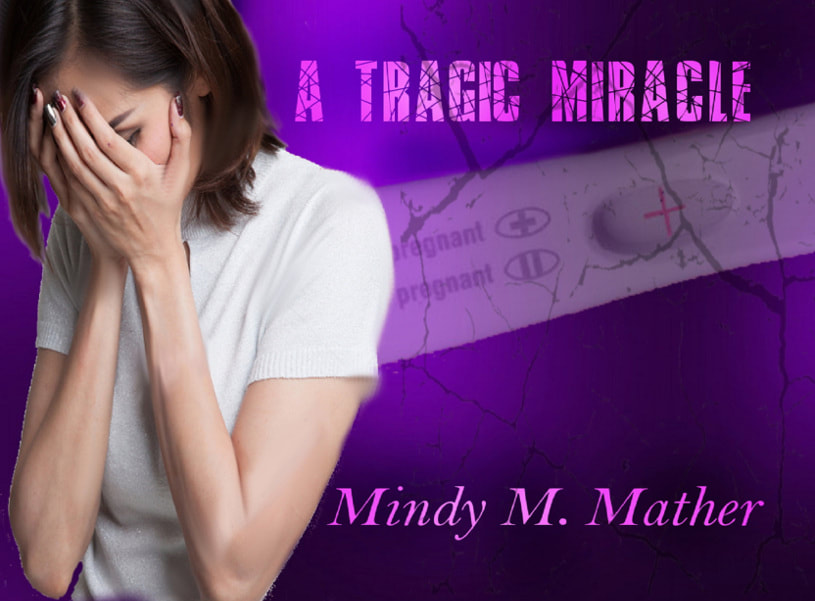 A Tragic Miracle
by Mindy Mather
Genre: YA Romance

Lacey looked forward to the bright future ahead of her. She had just graduated high school and was about to start college along with her twin brother Joshua and all of their closest friends. Life couldn't be better. That is until the night she was brutally raped and left for dead. After surviving that tragic experience, Lacey feels broken, dirty, and unworthy of love, but she soon discovers that the attack has also left her pregnant. Now she must make the most difficult decision of her life, abort the pregnancy or keep her baby.

Lacey and Joanna waited for what seemed like hours before the doctor called them in. She was stuck with a needle and had to pee in a cup so they could take some basic tests and see if they could find anything wrong. Lacey bravely acquiesced to the poking and prodding. Waiting was the hard part. Joanna sat on a stool across from Lacey who sat on the examination table still looking as if she would fall over at any moment. “I hope I’m okay.” Lacey sighed, exhaling a slow breath as another wave of nausea swept over her senses. “I’m sure you’re fine, you’ve probably just got a bad case of food poisoning, you have been eating a lot of junk from the campus café, who knows how well they keep their food stored.” Joanna replied, trying to help her not to worry so much. The doctor walked in and washed her hands in the sink before she turned and faced Lacey with a half-smile on her face. “Hello ladies, I’m Doctor Hanson, I’m filling in for Doctor Gregorson today.” She introduced herself. “Miss Tomlin, we’ve run some tests and everything seems to be fine.” She said noticing the relief in Lacey’s eyes. “We did, however, discover something.” Lines of worry covered Lacey’s forehead. “What is it Doctor? What do I have?” “One of the tests came back positive.” Doctor Hanson paused briefly. “You’re eight weeks pregnant.” She answered waiting for Lacey to digest the news. “What?” Lacey gasped in disbelief. “Pregnant? No, that can’t be right.” She shook her head knowing that the test had to be wrong. “That isn’t possible, are you sure Doctor Hanson? Because Doctor Gregorson said that I would never be able to have children.” “I’m sorry Miss Tomlin, but the test is not wrong, you are very pregnant.” Doctor Hanson frowned at being questioned as if it were an insult. “It has to be wrong Doctor Hanson! Lacey is a virgin…right Lacey?” Joanna asked, looking at her friend for confirmation. Lacey had worked so hard to block out the memory of that night that even her friends had dismissed the possible consequences. Lacey was too stunned to speak. “Your file says that you were raped two months ago.” Doctor Hanson cut in, violating the doctor patient confidentially code, but Lacey was too much in shock to care. “I’m sorry, but you must have conceived during that experience, if you haven’t had any other sexual experiences that is.” She paused still observing Lacey’s silence. “And after being told that you wouldn’t be able to have children…” She continued not seeming to take her patient’s feelings into consideration. “I would think that this would be good news, I understand considering the circumstances…” “Just shut up already!” Lacey shouted and hopped down from the examination table. “I don’t want to remember that horrible night!” She cried, running out of the room without a backwards glance. “Lacey! Wait! Please!” Joanna called after her as she followed her quickly leaving the room. She caught up to her in the waiting area and went to her. Lacey broke down as sobs fiercely shook her body and her breath caught in her gut.
“Lacey, I’m so sorry.” Joanna said embracing her. She held her friend as she cried. “You never said you were raped, you acted as if nothing happened, but I thought maybe…I didn’t want to believe it…” Lacey pulled away and took a deep breath to calm herself even though tears ran wildly down her face. “Joanna…I couldn’t…I just…it was so…I can’t…” She tried to talk, but could barely form the words. “I’m just so ashamed and…I’m going to have to tell Dwayne now…” She said, shaking her head in disappointment. “He’ll hate me forever and it’s all my fault.”

My name is Mindy M. Mather,


I have always enjoyed writing, ever since I was a young girl. As I got older I took a liking to Romance Novels specifically and decided that I wanted to write my own.
My first novel, A Tragic Miracle, actually started out as a Sims 2 Machinima series that I made in 2008 and later decided to turn it into a book. It is one of my best stories, but I have many more that I am in the process of finishing.
I hope that all of you will enjoy my books and if your interested in my sims 2 videos, they are on youtube. My youtube name is TMP200000.