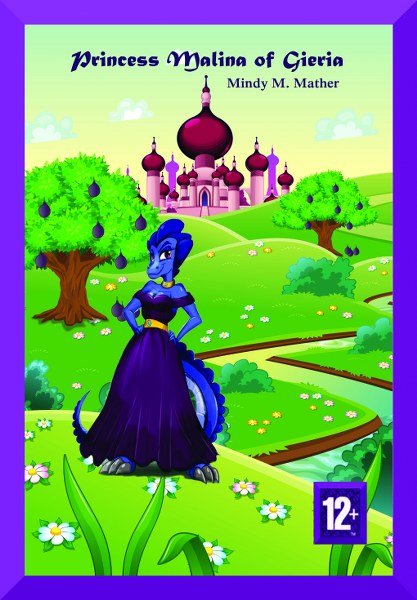 Malina is the princess of her great island home known as Gieria. As such she knows she must fulfill certain duties, but she happens to be in love with the one guy that her mother, the queen, hates. Together they must overcome that obstacle and stop the threat of Malina's would be suitor who only wishes to become king and to do away with her.

Malina paced before her mother’s throne, lost in thought. Occasionally, she would cast her glance to her mother, before lowering her orchid eyes to the marble floor of the throne room that she had seen many times before. She focused on it as though she had never taken in the details of it before. Her long purple gown complimented her light blue skin in the low candlelight that surrounded the throne. In the dim lighting, her dark blue spikes appeared darker then they usually were, and in her frustration, she flicked her tail back and forth wildly. “Mother! I am only eighteen, I cannot be wed yet.” She blurted out. “Not only do I have no one I wish to wed, I have much more for my life then all of this.” She explained, her pacing increased. She wished she could get her mother to see that she wasn’t ready for ruling, wasn’t ready for any of her mother’s expectations. Her mother let out an aggravated sigh. She knew that she was being stubborn, but she was just like her mother so why wouldn’t she be? Queen Shema shook her head and Malina watched the shadows of it. “You’ll not be able to fulfill your duties to Gieria if you do not marry and produce an heir for our people. It is our custom. You are the rightful ruler of these people. Do they mean so little to you?”  Malina felt the weight of it all. She didn’t want it. Her mother couldn’t be dying. “The medicine will work, so we don’t even have to worry about that.” She tried. It appears her mother did not hear her though because next she was asking about potential guys. “What about Scepter? He is cute. Outside of that, he just seems like a great possibility in your suitor search.” What suitor search. She thought. There is only one person she would consider, Rex, her secret boyfriend that she had to keep from her mother’s knowledge. She didn’t want to marry anyone else outside of him, but her mother would never let her marry him because of something he had done as a child. The thought of Scepter made her skin crawl. As the weight of her mother’s suggestion sank in, she froze. Fixing her eyes on her mother, she was sure the irritation showed. “Mother...” she huffed, “I’ll give it to him, he is cute. But, looks are not what getting married is about. You taught me that, and now just because Scepter is cute, you want me to marry him?” She grumbled under her breath about how her mother knew she couldn’t stand Scepter. She shook her head. “It’s out of the question.” Her mother sighed heavily. “He is a suitable choice though, it is a good point that he is cute though. It means your babies will be cute. I’m going to be here forever, Malina.” “No.” Malina responded. “Now, did you take your medicine today?” “Yes.” Malina knew that it wasn’t working, but she couldn’t face that. It meant her mother would be gone, it meant she would be expected to marry and present an heir. It was too much to take in. Malina sighed. “Good. I will see you later, I’m going out now.” She headed for the exit. “Where?” Malina didn’t want her mother trying to control her life, she was old enough to make her own decisions. By her mother’s attitude anyway, she wouldn’t be looking to her for approval much longer. It pained her to think of it like that. “Just going out, I’ll be home shortly after sunset.” She responded as she left. The palace guards granted her passage and pushed the heavy wooden doors open for their princess to go out to the city. She walked freely among the streets of the city, no guards with her. The beloved city sprang to life around her. There were birds calling, the whisper of the wind through the trees, vivid fabrics being waved before her, and food choices of every sort being presented to her to try. She just pushed through the crowds and wound her way through the numerous roads between houses until she finally came to her destination. Rex. After the conversation with her mother, she needed to see him.

My name is Mindy M. Mather,


I have always enjoyed writing, ever since I was a young girl. As I got older I took a liking to Romance Novels specifically and decided that I wanted to write my own.
My first novel, A Tragic Miracle, actually started out as a Sims 2 Machinima series that I made in 2008 and later decided to turn it into a book. It is one of my best stories, but I have many more that I am in the process of finishing.
I hope that all of you will enjoy my books and if your interested in my sims 2 videos, they are on youtube. My youtube name is TMP200000.