Mark is uprooted from his home and high school in the Twin Cities and forced to move with his family into a Victorian in Nowhere-ville. Busy with the relocation and fitting in, Mark’s parents don’t see what’s unfolding around them—the way rooms and left behind objects seem alive with a haunted past.


Of course, Mark keeps his ghostly encounters to himself, all the while sinking deeper into the house's dark, alluring, and ultimately terrifying history. As romantic entanglements intensify, the paranormal activity escalates. Past and present come together. Everything is connected—from the bricks in the walls to the hearts beating in their chests, all the secrets of Fountain Dead are finally unearthed.

Emma sensed the shockwaves of the earthquake before it struck. The air fizzled with rage. If Sasha hadn’t run off to get married while Emma was away, the maidservant might’ve proven a heroic buffer to what was to come. Emma missed working alongside her assistant. Now even more than ever. Emma’s underarms dampened, despite the chill seeping in through the windows. Her trembling hands fiddled with the tray of bandages, ointments, and miscellaneous implements as she mimicked organizing them. When would she get Jonathan alone to update him on her trip? She wondered if having already spoken to him would’ve done any good at the moment. The door thwacked open. Riley stormed into the room and menaced beside her. She straightened her spine to avoid cowering. His gravelly voice indicated a control of his anger. “Remember what I told you?” As he neared, Emma’s knees locked, her eyes closed. Where was Jonathan? The entire house had fallen eerily still. God, where was Hugh? Was he ever returning home? “You’re coming with me.” His directive left no room for resistance. “This is as good a time as any to tell you your precious brother’s dead. So you can get it out of your head that he’ll come rescue you. He ain’t ever coming back. And, Pa, well—” Emma still hadn’t turned to acknowledge him. Even if she did, he’d merely be a haze of color through her tears. The need to know what happened to Hugh attacked her like a swarm of bees. A desperate sadness was the brutal sting. Could the news be accurate? Or was it the cruelest invention meant to debilitate her? She shamefully wished Riley had been the one to die. Tempted to rectify that, she lamented her pistol lay back in her bedroom. When she didn’t move, he seized her by the arm. Noticing her attention on the dark object in his other hand, Riley raised it to her face and twirled it between his fingers. It was Jonathan’s pipe. Had he not taken it with him that next morning? Did Riley discover it in her room? Is that what this was about? When her brother jerked Emma away, the tray of medical supplies crashed to the floor. Her feet stumbled along through the dining room, into the kitchen, and then down the stairs into the basement. The Mason jars of blood, fluids, and organs stared at her from the shelves, in commiseration, or condemnation. She couldn’t fathom either.
The metal door to the safe gaped wide like a broken jaw. Her arms and fingers numbed.
Riley shoved her sidelong through the open maw, into the remnant of daylight within.
Praying he’d have a last minute change of heart, Emma faced him, her eyes pleading.
“You better not be carrying that red-devil’s spawn—or I’ll do you like I did that squaw. Don’t think I won’t.” What was he talking about? One of his war atrocities? Could she be pregnant—the thought hadn’t occurred to her. “Please,” she begged as the door banged shut, the light snuffing out. “Think about what you’ve done, you whore.” He spun the combination lock. The clatter and clicks equaled the lit fuse on a stick of dynamite. Emma battered the door. “Let me out.” Riley’s stifled yelling thundered on the other side. “Please.” Her cheek smashed against the frigid iron. The tramping of his boots overwhelmed her sobs. 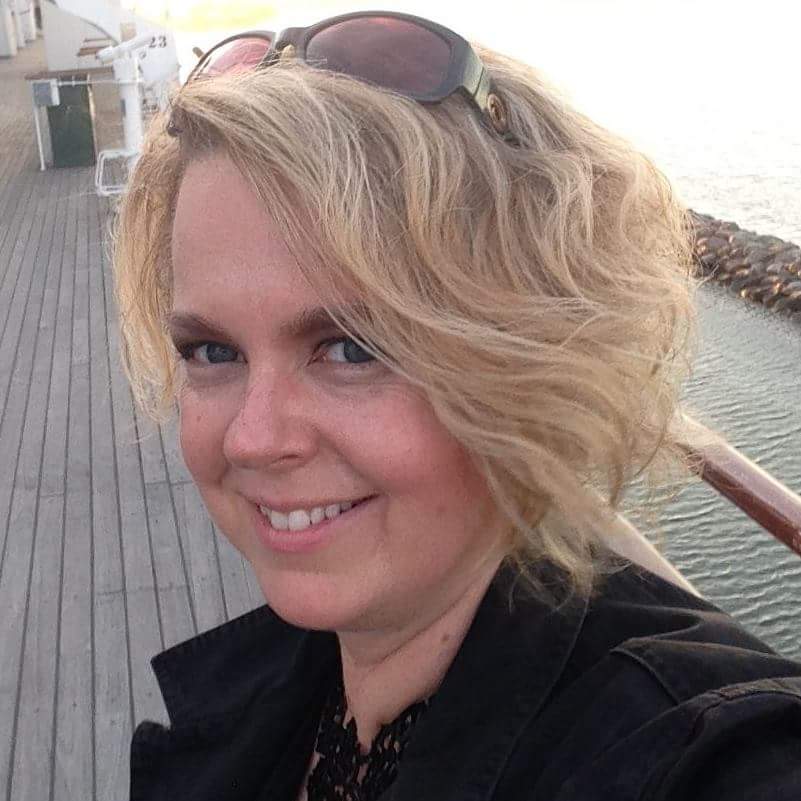 Theresa Braun was born in St. Paul, Minnesota and has carried some of that hardiness with her to South Florida where she currently resides. An English teacher and adjunct college professor for over thirteen years, she continues to share her enthusiasm for literary arts with her students. She earned a Masters in English literature with a thesis on Shakespeare’s Twelfth Night. In her spare time, she enjoys delving into her own creative writing, painting, photography and even ghost hunting. Spending time with her family and traveling as often possible are two of her passions. In fact, her world meanderings are often backdrops for her work. Striving to make the world a better place is something dear to her heart.

Do I believe in ghosts?
Absolutely. I live in Florida, and I have to say we have some amazing local ghosts. The Ft. Lauderdale walking experience stops at a downtown brewery/restaurant that used to be a brothel. More than one murdered prostitute haunts the place. Supposedly, across the street, one of the bars is home to Al Capone’s spirit. And, the Stranahan House is so loaded with ghosts that you can rent it for a night and test out your paranormal equipment. That’s on my list of things to do, for sure. The biggest thrill as a supernatural enthusiast happened during the Miami ghost tour in Coconut Grove (and I’ve done haunted tours all over the world). We walked through some of the streets, peering into storefronts and trying to catch a glimpse of some of the resident ghosts. We went through a couple of creepy parks where spectral trees and serious orbs appear in pictures. Also, people tend to get obscured and weird anomalies occur. However, it wasn’t until we stopped in front of a grave surrounded by a tiny fence that I believe I snapped my best paranormal photo thus far. Sure, I’ve gotten orbs and weird squiggly lines that can’t be explained, but never had I caught what looked like a ghost on film. If you look closely, I believe you can see a faint face in the spectral haze. Skeptics can still deny the ‘evidence’. I get it. But, those of us who believe can clearly see what’s there.

Have I lived in a haunted house?
Most definitely. My latest novel, Fountain Dead, is inspired by a real home in Winona, Minnesota. I’ve fictionalized the back story. However, as a teen, my room was the very same one the protagonist, Mark, stays in. His window (and mine) overlook a vacant lot. There wasn’t a fountain on the property, yet I had vivid nightmares about a murky pool of water that several young women emerged from. They were covered in mossy gunk and were both beautiful and goddess like, yet terrifying. These reoccurring dreams are what my imagination, all these years later, still wrestles with today. What happened to those girls? No one knows. That’s how Fountain Dead was born…