The True and the Crown by May Dawson Book Tour and Giveaway :) 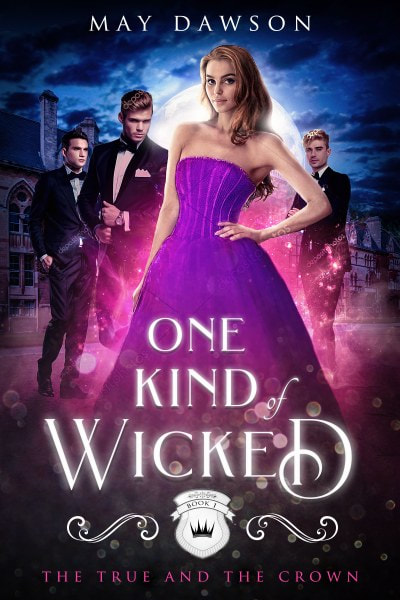 One Kind of Wicked
The True and the Crown Book 1
by May Dawson
Genre: Reverse Harem Fantasy Romance

There’s no place like Avalon, land of mists and magic. Exiled to your world for my father’s sins, I longed for home. But Avalon is no place for the dark lord’s daughter.
Until I’m invited home to attend the academy of magic. I’m no fool. I know there are strings attached.
Those strings may have something to do with three handsome, alluring men who befriend me.
I can’t trust them, but I can’t resist the pull I feel for them, either. It’s been a long time since I had friends.
I don’t know how long I’ll last at the academy. My father’s henchmen, the True, want me to restore his wicked glory. The Crown wants to use me to destroy the True.
And in the midst of all this swirling intrigue, I’m getting abysmal grades in both Calculus *and* Casting.
These men seem determined to tutor me, fix me and most of all, protect me.
But my deep, dark secret is that the dread magician’s daughter…doesn’t have her magic anymore.
When they realize how useless I am, will they still stand by my side?
Welcome to a world where redemption is possible, where friendship and adventure and magic abound, and where love means never having to choose.
One Kind of Wicked is the first in a five book university-age academy reverse harem series

It seems like a waste to leave those lips unkissed. Airren gazes down at me with softness in his eyes, as if he’d kiss me back. That might be a trick of the thin silver moonlight that fills the room. But maybe it’s not. I close the distance between us and press my lips tentatively against his. Airren’s eyes widen slightly, but that’s his only response. My cheeks blaze with humiliation. I start to pull away, but his arm tightens around my waist. He nuzzles the corner of my mouth, and I turn my face back into his. When his lips press against mine, they are as soft and tender as I imagined. Our mouths press together over and over, chaste close-lipped kisses that carry more passion than I would have imagined. He yanks me tight against his body. When I throw one leg over his waist, his abs brush against mine, every hard-ridged edge distinct, even through his t-shirt. His hand slides under my shirt, his big, warm palm wrapping around my waist. He touches me as if he’s been holding himself back until now. My palm finds his jaw, my fingers resting on his stubbled cheek; the faint shadow of his night-time beard is rough against my hand. It’s a contrast with the Airren I know during the day, clean-shaven and clean-cut and cool. When he kisses the corner of my mouth, I look up into his warm and heavy-lidded eyes. Bedroom eyes. For the first time, I know exactly what that phrase means. No one’s ever looked at me the way Airren’s looking at me now, with a mix of affection and lust. “You have dimples,” he whispers against my cheek. “I haven’t seen those before.” I rub my thumb across his high cheekbone, savoring the way his face feels under my touch. For once, I am totally grounded, totally here in the moment. Airren feels like a lifeline. “And you have a scar.” I touch the slash through his eyebrow. His eyes darken before a faint smile turns up his lips. “I have a lot more than one scar, T.” 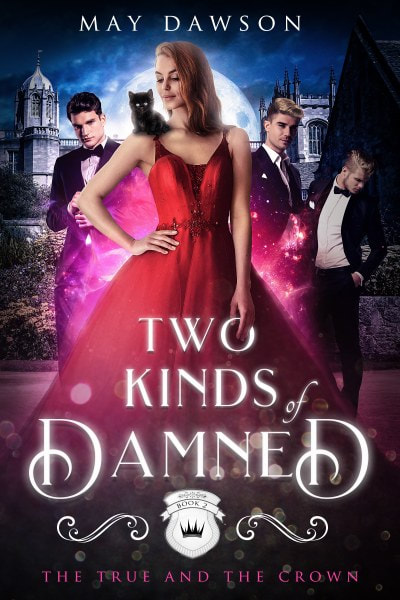 Two Kinds of Damned
The True and the Crown Book 2

The True want me. The Crown wants to use me. But what do I want?
The academy of magic doesn’t have frat parties; it has balls with tuxedos and flowing champagne and chocolate fountains. Oh, and masked debauchery. Lots of that.
Unfortunately, instead of enjoying the debauchery with the three alluring magicians I’m falling for, I’m there to draw out the True henchmen. I’m nothing but bait in a ball gown.
To serve my country—and to stay in Avalon—I need to play the part of a villain. The True need to think I can be persuaded stand alongside them as they destroy Avalon.
At least these three men see me as I really am: a woman who just wants a second chance.
Unfortunately, they’re hiding secrets of their own…
And some of those secrets will be revealed, even before the masks come off.
Goodreads * Amazon 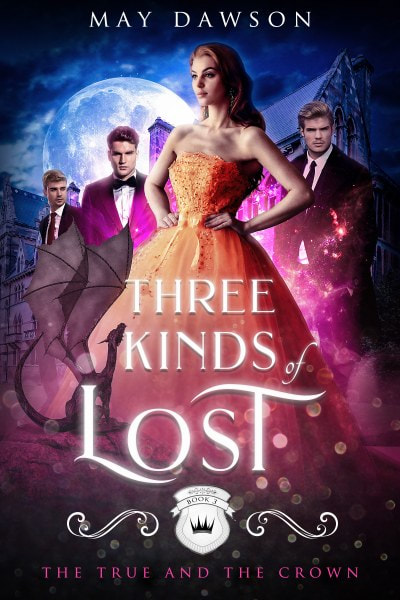 Three Kinds of Lost
The True and the Crown Book 3

The university of magic is no place for the dark lord’s daughter…and the Crown Prince’s birthday ball is no place for her either.
But it’s not the kind of invitation that a girl can reject. So, my men and I pack up our fancy clothes and off we go to the prince’s castle. We have a mission along the way. The secrets that have kept me safe until now are crumbling. I need my magic back, now.
Without my magic, without being useful to the Crown, I can look forward to a one-way ticket back to your world.
Or a one-way ticket to dead.
But while my men and I hunt the man who stole my magic and destroyed part of my soul…
…he’s hunting me too.
By the time our battle is over, every truth will be revealed. Every lie will be destroyed.
Will Avalon ever be the same?
Will my heart?
Goodreads * Amazon 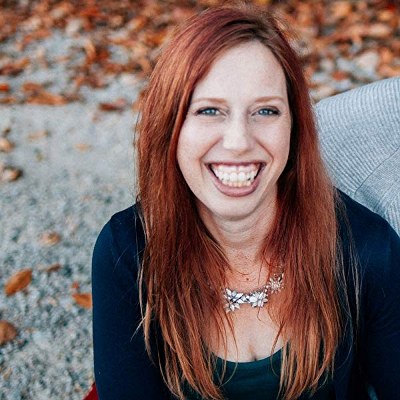 May Dawson writes reverse harem romance about magic, strong women, and the men who love them. A native New Yorker, she's settled in Virginia, where she is raising two red-headed troublemakers and a passel of cats.