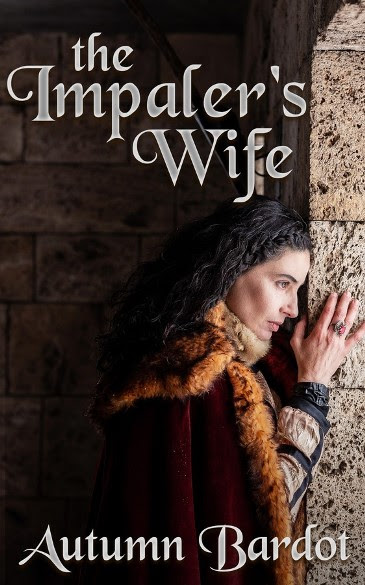 The Impaler's Wife by Autumn Bardot

Legend, history, and passion collide in this gritty, evocative, and sensual story about history's most notorious price and the woman who paid love's ultimate price. The year is 1464, and young King Matthias controls Hungary, his family, and the fate of the world’s most notorious political prisoner, Prince Vlad Dracula. Ilona Szilágy, the king’s cousin, is young and ambitious. Dracula is determined to marry into the Hunyadi family. It is love at first sight…but the king has other plans. The Impaler Prince, however, never takes no for an answer. This begins Ilona’s journey into the treacherous world of court intrigues, family betrayals, and her husband’s dark desires. Eager to become Vlad’s trusted confidant, Ilona soon discovers that marriage to a man tortured by his past comes with a price. Woven throughout is a peek into the life and times of one of the world’s most enigmatic and maligned rulers…the man before the legend. With Bardot’s decadent period detail and a cast of gritty evocative characters, The Impaler’s Wife offers a fierce yet sensuous glimpse into the violent 15th century.

Available on Amazon and Barnes and Noble

I love stories about Vlad Dracula, and there is no shortage of them at all out there - everything from historical facts to historical fiction and everything in between.  This book appealed to me because it was historical fiction but it showed Vlad Dracula in a new light. I loved that the setting and historical background were good, and I also loved that the POV was from the main character, the woman who was destined to become Dracula's wife. I loved that the story began in a royal court where Illona was a cousin to the new King, and the attraction she felt to Vlad was so fierce that it was palpable to the reader - I could LITERALLY feel how she was feeling. Her sister Margit was definitely the comic relief of the book, thinking that she was going to marry Vlad but showed absolutely no attraction to him whatsoever. And Illona's entire family is against Vlad marrying into the family, but that doesn't stop Illona at all, doesn't even slow her down. She wants him and it's clear from the first time she sees him that he feels the same and that nothing will stand in their way. Not even the fact that Vlad Dracula is a prisoner in King Matthias' court. What is funny is that even though he is a prisoner and cannot leave, he is also given the unlikely status that he inherited from his own father - so he attends the court events and dinners and balls.

And throughout the book, we also get chapters thrown in that show us flashbacks from Vlad's childhood and it shows us how he came to inherit his father's kingdom - because in actuality it was supposed to be his brother Radu, but that did not happen. So from the beginning, I think the author did a great job of making Vlad Dracula a very sympathetic and likeable character, even though she also sprinkles all of the little details about his reign throughout the book as well. But I as the reader looked past those details just like Ilona does and it's a type of suspension of disbelief for the reader even if they know the full history of Vlad Dracula and his bloody reign. Somehow he becomes OUR love interest as he also gains the trust of Ilona as well as her love.

Of course we know from the name of the book that Ilona does in fact marry Prince Vlad, and I did do a little research and it appears that Vlad really did marry a cousin of King Matthias, however her name was not Ilona from what I could find out. And even though we know how the story ends because it's real history, while we are reading the book, that suspension of disbelief and Ilona's faith in her husband carries us through and makes us want to believe that Vlad was indeed a superb ruler and was all for his people. Of course no one knows for sure, all we have are a few facts that are known and a LOT of fiction surrounding the real Vlad Dracula - and because I don't want to give away the ending of the book - is it possible that he was not who we think he was? Or was he in reality the blood-thirsty vampiric ruler that we all know and love? And if Ilona finds out that he is not who she believes him to be, how far will she go for love?

Well, you need to read this book!!! It is fantastic, an epic read, very engaging and once I started reading it I was just unable to stop, I had to make myself stop each time just to go to the bathroom LOL. Definitely on my must-read list again and again. And highly recommended for anyone who loves historical fiction and stories about Dracula. 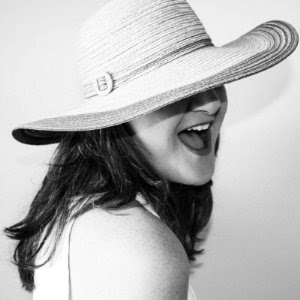 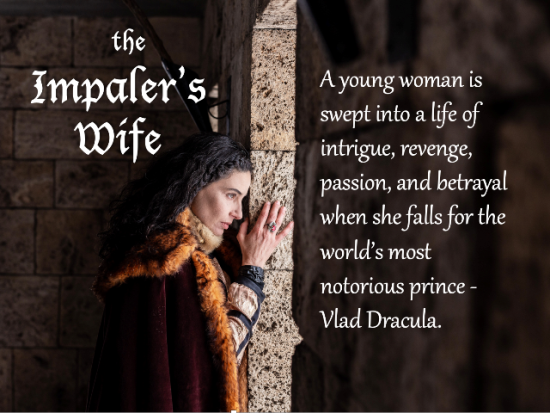 During the Blog Tour, we will be giving away one paperback copy of the Impaler's Wife! To enter, please use the Gleam form below. Giveaway Rules – Giveaway ends at 11:59 pm EST on July 5th. You must be 18 or older to enter. – Giveaway is open to US only. – Only one entry per household. – All giveaway entrants agree to be honest and not cheat the systems; any suspicion of fraud is decided upon by blog/site owner and the sponsor, and entrants may be disqualified at our discretion. – The winner has 48 hours to claim prize or a new winner is chosen. The Impaler's Wife