Exile in Darkness by Annalisa Carr Book Tour and Giveaway :)

Heritage and magic matter to the London covens.


Aristocratic witch, Isabella Pethany, has heritage but not magic.
Underworld powerbroker, amnesiac vampire Maldit, has magic but no heritage.
Lukas Sindis, coven sorcerer and famous psychopath, has both.

Isabella knows her null magic status makes her an embarrassment to her family, but since Natalie, her sister, was murdered, she is all they have left. Guilt makes her willing to do almost anything to compensate for her lack of value, but her grandmother’s proposal to match her with Lukas, in an attempt to bring strong magic back to their bloodline, is a step too far.

When Maldit rescues a strange witch from hunting vampires, his main concern is to limit trouble in his territory. Everyone knows witches are troublesome, and this one is no exception. Her proximity slashes through his damaged memory, allowing him to catch glimpses of his forgotten past.

Drugs have suppressed Lukas’s magic for almost twenty years, filling him with a reservoir of trapped power. When he escapes, his magic flies free, washing over Maldit and Isabella, and clearing away the spells paralysing both of them.

The dark secrets of the London coven are about to explode into the light of day.

Isabella? Isabella Pethany?
Whispers of her own name floated through her mind. She pushed the pillow aside and sat up, pressing her hands against her ears. It didn’t stop the insistent repetition of her name. Someone called to her, but who would do a thing like that at this hour of the morning? The family would all be asleep by now, and the only servant awake should be the doorman. Her imagination was running riot. She lay down, closing her eyes, but the feeling of being summoned didn’t go away. Isabella. Isabella. Isabella. Her name echoed around her skull, louder now. She sat up abruptly. Next to her, Alfie stirred, growling in his sleep. She ran the palm of her hand over his shaggy flank and switched the bedside lamp on, before walking to the window and drawing the curtain back. Pools of dim light surrounded the bases of the old-fashioned streetlamps. Between them, the pavement was dark, and the trees in the square cast black shadows over the iron railings. She opened the window and leaned out. “Isabella?” The voice was a seductive whisper from below. It was definitely real this time, vibrating through the air, rather than her mind. She squinted into the shadows. The vampire from the bar stood on the opposite pavement, his figure almost hidden in the darkness. Maldit. Her heart beat faster. His face tilted upwards towards her second-floor window, green eyes glinting. “What do you want?” She pressed two fingers to the point in her neck where the skin was thinnest. Her pulse hammered against them.

Annalisa Carr lives in the English Lake District, where she shares a view of the fells with three cats. She spent the early part of her life working as a protein crystallographer, a job she found fascinating. She now spends her time writing, in a variety of genres. Science Fiction, fantasy and fantasy romance are her favourites.

Can you, for those who don't know you already, tell something about yourself and how you became an author?

I’ve been a scientist most of my life. As a child, I wanted to be an astronaut and explore outer space, but unfortunately (or fortunately, as I’m claustrophobic), I never managed it. Because of this yearning for the stars, I started out writing science fiction and very bad space opera, before moving on to fantasy and paranormal romance. As Annalisa Carr, I’ve published a PNR trilogy with Soul Mate Publishing. Exile in Darkness is my second self-published novel. The first was a return to science fiction (dystopian).

Where were you born/grew up?

I was born in Cumbria, on the edge of the English Lake District, and lived there until I was eighteen. I studied in Scotland, at Edinburgh University, and after that, I worked in London, Oxford and Cambridge. I’m back in Cumbria now – combining consultancy work with writing. 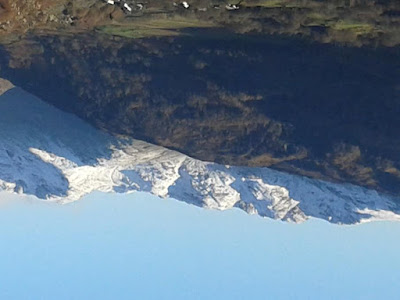 What are you passionate about these days?

I feel very strongly that we (as a species) need to rethink our attitude to the world we live in. At the moment, we only have one planet, and we should care for it. It’s not just down to governments, everyone has a responsibility. I think our way of life has to change, or it will change for us while we aren’t looking. Maybe I’ve been reading too many post-apocalyptic novels (and trying to write them), but we have a beautiful world and we should all try to keep it that way.

What do you do to unwind and relax?

I find it worryingly easy to relax. The problem is getting back up to speed. In theory, I run, swim and dance, but in practice, I like to lie on the sofa with my cats, reading novels and eating chocolate. 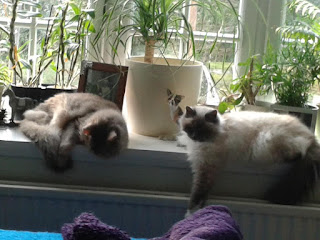 What is something unique/quirky about you?

I don’t drive. It’s probably more common to be a non-driver in the UK than it is in the US, but it’s still unusual. I’ve always travelled by public transport and have rarely found it a problem. Occasionally I reconsider my carless status and wonder if I should change it. So far, I’ve not bothered.

If you knew you'd die tomorrow, how would you spend your last day?

Perched on the sofa, procrastinating. I hope I’d manage to fit something good into the day, but...

I wrote the second chapter of Exile in Darkness for a competition, and then left it alone for a long while, almost forgetting about it. In the gap years, I wrote my PNR trilogy. When I found myself wondering about what had happened to the characters in Exile in Darkness, I came back to it, and wrote a first draft. When I rewrote and edited, a large cast of secondary characters emerged. Many of them are clamoring for their own story.

Who designed your book covers?

If you had to do it all over again, would you change anything in your latest book?

I’m sure I would change many things. A book never feels complete to me, and I could carry on revising it forever. I think I share this feeling with many authors. I try not to think about it.

Have you written any other books that are not published?

I have a contemporary romance, the first complete novel I wrote (and it shows), which is now completely dated. I also have two fairly recent complete novels sitting on my computer nagging at me. One is a cozy paranormal romance (I’m not sure whether it’s so cozy it’s boring), and the other is the sequel to my dystopian novel. I have a complete regency novella (but I’m not happy with it), and a steampunk novella (lots of things I’d change in it). I have two first drafts of space operas written (I quite like them, but they both need serious rewrites), as well as a plethora of partially written books.

If you could tell your younger writing self anything, what would it be?

Don’t wait. Start writing now. Write what you would like to read.