If Nothing Else, Eve, We've Enjoyed the Fruit by Elaine Pascale Book Tour and Giveaway :) 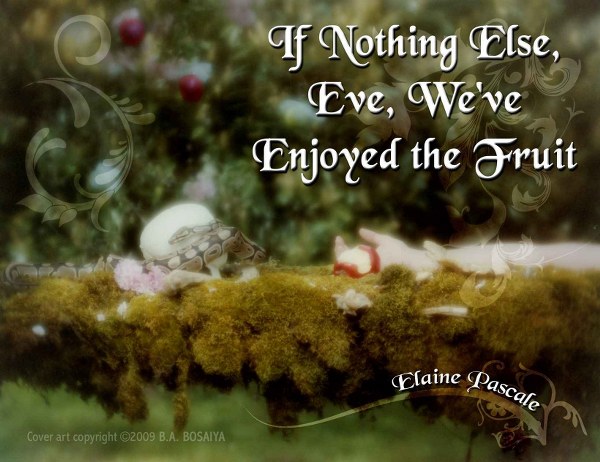 If Nothing Else, Eve, We've Enjoyed the Fruit
by Elaine Pascale
Genre: Horror

What happens when a kept woman refuses to take her ridatemp and begins thinking for herself? In If Nothing Else, Eve, We've Enjoyed the Fruit; she begins talking to bunches of grapes and cantaloupe that convince her to commit murder. Through her visitations with fruit, the woman learns that a gender war can be reversed by traveling back in time and eradicating the Tree of Knowledge and its villainous apples. The fruit persuade her by telling her four other stories:

Boys Will be Boys: A spa is turned into a concentration camp: just don't ride the elevators!


Ripped to Shreds: Pregnant Jody Burkhoff's body is changing rapidly, but not as quickly as the lupine metamorphosis of her husband. First the neighborhood animals are mutilated, then the neighbors are viciously murdered. Which proves to be more dangerous, a monstrous creature or a hormonal woman?


O: Khaki Barlow enters a pageant in which only one woman survives. She must complete tasks that are both mentally and physically daunting, all while trying to learn the meaning of the words left by the eliminated: I am here. Does she face incredible fears? Does a one-legged duck swim in a circle?


The Prison of a Man: Told as an ethnographical project, Lara Thomas researches the deaths of shoppers at a mall embedded in a small town, and encounters the legendary Goat Man.


If Nothing Else (Prologue): Readers learn the final decision in the gender war.

Let’s begin by telling the truth. Truth is different from belief:  it is meatier, it has more bite. There is no delight like being proven correct in one’s belief, and no conundrum quite like being proven wrong. Ask any college professor who has been put on the spot by some arrogant post-teen. Ask any researcher who has forsaken friends, family, and faith for decades, all for an elusive hypothesis. People feel one way about beliefs, mothers feel the opposite. Mothers want the deep-rooted fears that gnaw at them with the bite of a St. Bernard to be refuted. These are the fears and superstitions that they believe about their children, dread that seems so inevitable that an entire life plays out like déjà vu. Mothers know things before they know them. Call it intuition, call it perception, call it anything but true. The desire to be proven wrong, the desire to slip into denial, can be powerful stuff. And when belief becomes truth, that is when the gates of Hell swing open widely. The truth is:  Jody Burkoff’s husband had begun to change. 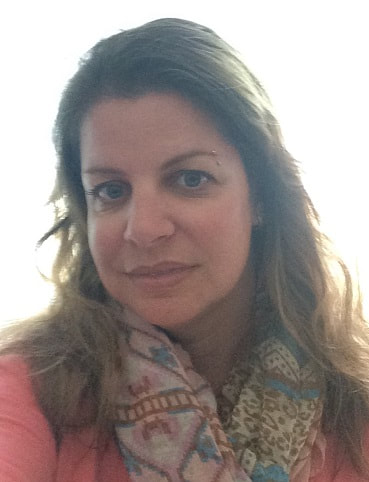 Elaine Pascale has been writing for most of her life. She took a break from fiction in order to give birth to two children and complete a doctoral dissertation. She lives on Cape Cod, MA, with her husband, son and daughter. She teaches a variety of courses at a private university in Boston: from English Composition and Communications to a Vampire Seminar. Her writing has been published in Allegory Magazine, Dark Fire Magazine, and several anthologies. She is the author of If Nothing Else, Eve, We've Enjoyed the Fruit, and is also the author of the nonfiction book: Metamorphosis: Identity Outcomes in International Student Adaptation--A Grounded Theory Study. She enjoys a robust full moon, chocolate, and collecting cats.

The final girl is the last character left alive to confront the killer. As a fan of any and all final girls, I find it interesting that If Nothing Else, Eve, We’ve Enjoyed the Fruit does not contain that trope.
…Eve… was written many moons ago and my focus and my issues were quite different. It is much more dystopian than if I were to write it now. There is a running theme of loss of agency, with the women representing facets of relationships: the lover, the mother, the friend, the fighter. While I tend to argue that my stories do not contain autobiographical information (let’s hope not: my real life would not welcome horror in the same way my imaginary life does), perhaps the stories in …Eve… were a way of tinkering with adult womanhood. They may have been a playground for figuring out where my version of being a woman fit in, or where I wanted to fit in. In that sense, as well as in the sense of what the prologue means, the characters were commencement girls and not final girls.