Prince of Sin by Cass Ford Book Tour and Giveaway :) 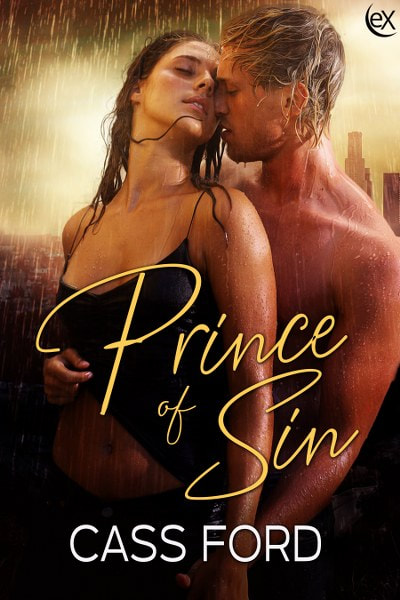 When a savvy gossip vlogger and porn’s most renowned bad boy fall in lust, they must decide if they’ll follow passion into dangerous territory.
When savvy gossip vlogger Morgan Sidney gets assigned the breakup of porn’s most illustrious couple, she strikes a deal with her boss—if she scores an exclusive, she’ll get promoted. So when the famous and flirtatious Prince of Sin offers to fulfill her three wildest sex fantasies, Morgan must decide whether she’ll keep things professional or surrender and explore her sensual side.

As someone who despises the media, why is Chase Prince spending time with a reporter? Clearly, he’s intrigued. But can a scorched sinner—and the biggest smut star around—let a fierce civilian enter his domain?

Chase returned topless, all abs and definition, wearing sandals and washed jeans. He approached Morgan, who was seated on a production chair centered in the warehouse, wringing out damp hair. With everyone else absent, it was quiet aside from whooshing ceiling fans high above. “You know, I’ve made thousands of girls wet,” Chase began, settling in the chair opposite her, “but you’ve lifted the bar.” She lowered her hands and huffed, then adjusted her cell phone on the armrest. “Thank you for agreeing to speak with me.” Chase slouched casually and placed a drink into the cupholder. Morgan forced her gaze from the contoured lines on his marble stomach to press play on the phone’s video camera. She sat primly, legs crossed, notebook in hand. “Everything you say is now on record, Mr. Prince.” “Please, call me Chase,” he insisted. “Or Your Highness will do.” She chuckled. “Mr. Prince, how have you been since the split?” “I’m great.” He swigged his cocktail, then offered her the glass. “Care for a sip? It’s an old-fashioned made with seventeen-year-old bourbon. Tastes like caramel.” “No, thank you. I don’t drink on the job. So, you’re great? Then why haven’t you posted online in over a month? Why are you dodging the media?” “I’m talking to you, aren’t I?” He winked. Morgan faked a nauseated gag. “You seem tense,” he continued. “So, why’ve you been hiding? Tori’s talking to everybody.” “Tori adores attention.” With a cocksure grin, he asked, “Sure you aren’t tense? We could get more comfortable in my dressing room.” “Look, I’m here for my story.” But the more she shut him down, the harder he tried. “Do you do anal?” “Excuse me?” Morgan jolted awkwardly upright, knocking her pen onto the cement floor. “Nah, you look too uptight for anal.” “I’m not.” She retrieved the pen, flipped back up and slouched, mimicking his posture. Her sweater pinched, revealing a flat stomach with toned abs. Chase and his dick took immediate notice. “Not uptight or not into anal?” “Both. Neither. Can we stick to…” “Knew it,” he interrupted. “So what are you into?” “Exclusives,” Morgan contended. “How do you feel about smut sweetie Tori Jade marrying Viola Emperor?” “Tori may appear a sweet, harmless hag, but she wields a poisoned apple,” he replied, taking a large gulp of his drink. “However, that harlot’s free to fuck, marry or kill whoever she wants.” Morgan grinned, jotting down fuck, marry, kill. “Besides,” he continued, “there’s plenty more pussy in the pound.” Again, his eyes found her shapely tummy. Clearing her throat hotly, she yanked her shirt down and straightened her stance. “Midgets?” he asked. “Pardon?” “Now I’m thinking you’re into kinky shit. Like midgets. Or hentai.” “I’m only into doing my job,” she replied through gritted teeth. Chase chuckled. “What?” “Everyone’s into something. Tell me your top three fantasies. I’ll gladly help you score that exclusive.” “My only fantasy is meeting this deadline,” Morgan assured. “So I can start covering more significant news.” “Don’t believe you. Let me figure this one out.” His eyes searched her stiff physique for a tell. “Threesomes?” She grimaced. Even in her last, and only, serious relationship, Morgan never divulged her fantasies. “Shower sexy time?” Chase asked, watching. Morgan side-eyed him. She’d once attempted shower sex but wound up with three stitches and a torn bath curtain. Humming and tapping a finger on his glass, he asked, “Sex in public?” A pause. “No.” But the word blurted out much too skittishly. Her lips pinched. She gulped and lifted her nose, insisting, “Absolutely not.” But Chase raised his brows victoriously and broadened a devilish smile. He knew her fantasy.

Cass Ford began creating smoldering male protagonists when she was five years old and convinced her aunt that she had a hot and heavy kindergarten boyfriend. In grade school, she penned tales on her parents' typewriter and by middle school sold her own love and gossip magazines to friends. As a preteen at sleepover camp, Cass often told playful, steamy bedtime stories to her bunkmates.

After earning her Bachelor of Journalism degree and several TV/film certificates, Cass continued to hone her passion for storytelling as a television development producer. Born and raised in Canada, she now resides in California.

Can you tell us a little about the characters in Prince of Sin?