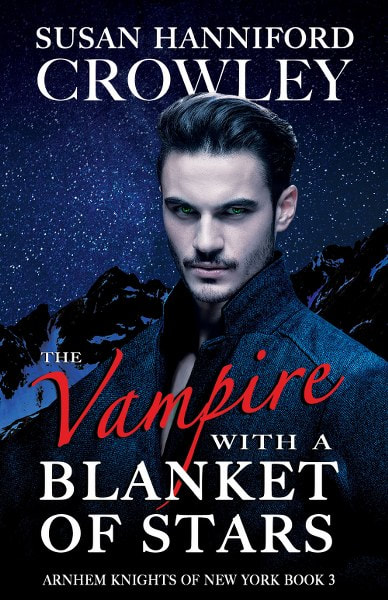 In 1938, Vampire Prince Răzvan and his companions on their way to see the king, take the snowy path into the Carpathian Mountains of Romania. In the deep woods, they find a gypsy encampment and take refuge with them for the night. His heart is lost gazing in the exotic pale blue eyes of a raven-haired beauty. Saraina and her people just want to be free and live peacefully. Meeting Prince Răzvan changes everything, first with his dire prediction and second, with his warm hands and gaze that tear of her heart.

Răzvan walked out into the forest beyond the camp. Snow stopped falling, and the moon broke through the clouds shimmering on the crystalline ground. He detected the soft sound of a song about rabbits and followed it. She was near. The Dragă’s presence was electrifying. He didn’t know why he called her that. She came around the side of a tree and gasped in surprise, dropping the sticks she’d collected. “I’m sorry. Let me help you.” He picked up the sticks. “I am Răzvan.” “I know who you are.” She moved away from him, circling back to the camp. “I will not hurt you. You have my word. May we talk?” “Talk about what?” “Why were you looking at me?” He asked. “I was not. You were looking at me.” Răzvan laughed. “You are right, Dragă.” “Don’t call me that.” “I have no name to call you by. What is your name?” She smiled and backed around the tree. He followed. Saraina.” “Saraina, Dragă mea (Saraina, my darling),” he repeated. “Don’t call me that. I don’t know you.” “Have you ever met someone for the first time and knew that you’ll know them forever, that their presence gives your heart peace?” 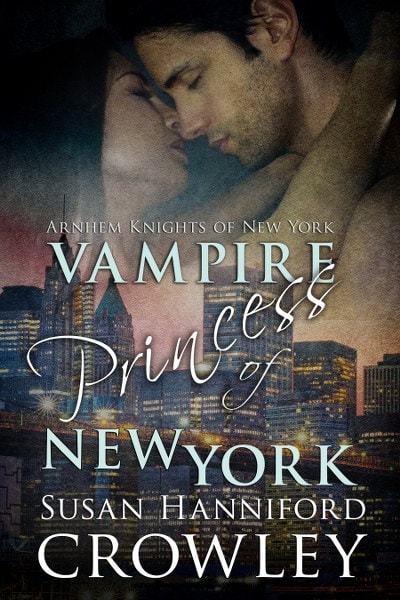 Noblesse is the daughter of the Vampire King of New York Maximillion Vander Meer. In the over two hundred years, she’s been a vampire, Noblesse has never found a true love or discovered what happened to her mother who disappeared just prior to the French Revolution.

Noblesse has to choose between two men. Both profess their love. Both are keeping a secret from her. One wants to destroy her, and one wants to love her forever. But which one?

“Donovan?” Snapping out of his revelry, he laughed. “Yes, Sha. What do you need advice on?” Sha was a Cajun way of saying my love. He didn’t use it for everything cute or sweet like some people. Somehow it fit Noblesse perfectly. She took his arm and guided him toward the middle of the shop. A thin man in a gray suit with brown hair and beady eyes stared at him through round silver glasses. He stood by a large mirror with an elaborately carved wooden frame in shades of deep blood red etched with gargoyles, dragons, griffins, pythons, lions and every beast known and imagined, all entangled in a battle to the death with claws and teeth gnashing, biting, and slashing. On the top, two words were engraved in French—“Miroir de Sang.” “Well, what do you think?” “It’s says, Blood Mirror. That can’t be good.” “It was created for the court of his majesty, Louis XVI,” the thin man added. Donovan frowned. “Wasn’t Louis XVI beheaded?” “Yes.” The man gave Donovan the once over. Maybe he shouldn’t have thrown on his boots, jeans, T-shirt and beat up old bomber jacket. He did own designer clothes. His daughter had insisted he have an entirely new wardrobe before the wedding, but as soon as Evie had gone on her honeymoon he’d fallen into his old ways. Donovan was glad he couldn’t read minds like a vampire. He didn’t care what the man thought, but Noblesse’s opinion was another matter. “From Marie Antoinette’s palace?” Donovan asked. “Oui,” Noblesse replied. Her smile almost made him forget his objections. “You don’t want this mirror, Sha.” “Why?” “It’s ugly. Besides, weren’t the mirrors of that time period gilded in gold, and smaller?” “Very large mirrors were made for the palace. Not all were gilded in gold. This, however, is an unusual piece.” “Ma chérie, it’s ugly. You don’t want that. Get something else.” “Aww, mon cher,” she murmured. Turning to the thin man she said, “Please, pardon us. We would like to discuss this in private.” “Certainly.” He walked off in the direction of the Ming vases. “Of course, Sha, if you want it, I will not be able to talk you out of it. You only want it because it’s French.” “It’s more than that. Come and look.” As she stood before it, Donovan finally saw what she was talking about. Vampires could not be seen in mirrors made of silver. When he should have seen nothing at all, he gazed upon her lovely reflection. 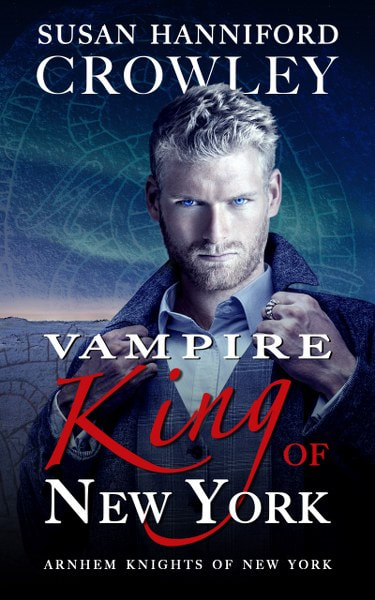 Max Vander Meer is a modern day Viking, CEO of VMeer Industries, and a Vampire. He makes a plea to the Goddess Freya to find the only woman who can heal his heart, the woman haunting his dreams. But, the Goddess strikes a bargain with him. To find this special woman, Max must return to the city he helped build-New York, which is threatened by an ancient terror. When he meets Evelyn, he is astounded. Could she be the one who inhabits his dreams? But Evelyn is haunted by loss and betrayal. How can Max win her love when she doesn't trust him as a man, and she doesn't want to be a vampire? If Max returns to Iceland without her, he will be encased in ice . . . forever!

Maximillion Vander Meer stood in the jagged mouth of the ice cave with a wolf skin girding his loins and fur boots on his feet. A frigid breeze breathed its welcome over his bare chest, arms and legs. He smiled and closed his eyes to step back into the Viking past he loved, where he was free. He threw back his head and howled in exuberant abandonment. Then he ripped off the wolf skin and kicked off his boots. Max ran to the shadowed alcove he knew so well. A flicker of the past sparked in his brain and Vikings filled the cave, their voices rich in the chant of a ritual forgotten in the modern age, invoking the protection and wisdom of Odin, Thor, and Freya. Then he blinked and they were gone. Their voices silenced by time. Every time he entered this sacred place hollowed out by his ancestors, their presence worked magic and distracted his weary heart from the curse inhabiting his body. This power brought him back to the Viking warrior deep within him, as only here could he reconnect with his lost humanity. Every passing moment the curse pulled him further from whom and what he’d once been. That was the danger in being a vampire. It wasn’t the chill of his body, but the distance that crept into his heart. He was on the edge of forgetting how the laughter of his son warmed him to his toes. The memory of Svenna’s delicious heat as her soft skin lay against his flesh igniting the fire between them, slipped through his fingers like water. Inhaling the fragrance of flowers in her hair had made him feel powerful. Even the excitement of the next adventure filled with salt spray and swords clashing faded away. His heart no longer raced. The dire flaw in immortality was the sameness. Centuries of monotony blurred into others. Few ancient ones survived the deadly soul-numbing tedium of every day being the same. Closing on a thousand years, too many chose to lie in the sun and burn in agony over the course of two days until they crisped away in the wind. When the true burning began, night, the blessed night, offered no reprieve. The recent “chosen” death of his friend Coelhus was etched in his memory, making Max’s need more urgent than it had ever been. Coelhus had given up. After centuries of dreaming of a woman named Celeste, he ceased to believe she could be real. Coelhus could no longer bear the loneliness and the endless searching. Consumed by his dashed dreams, he gave his body to the sun. Max stayed with him in his last moments, and while he couldn’t deter his friend, he resolved not to end in ashes himself. Time had robbed him of love, but today, in this moment, Max meant to get it back. Right now! 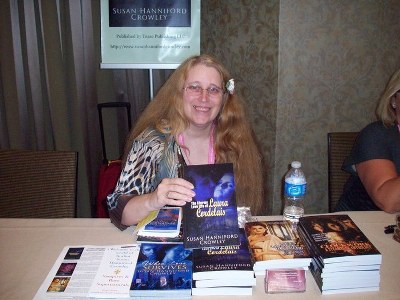 I'm married with two children and a granddaughter. Pete the dog and Bella and Buffy the cat sisters are the furry members of my family.

I have two college degrees, a BFA in Theater and a Master's in Education. I've explored a myriad of occupations from being a teacher to a deli worker to a webmaster. My favorite thing to do in life is writing.

My only goal for my writing is for my readers to have fun.

I write science fiction, fantasy and paranormal romance. In addition to writing, I'm also an Associate Editor for Space and Time Magazine. I'm a member of SFWA, RWA and CTRWA.

My hobbies are traveling, collecting sea shells and dragons.

It is online at https://trs.parties.com and also on Facebook at www.facebook.com/theromancestudio/