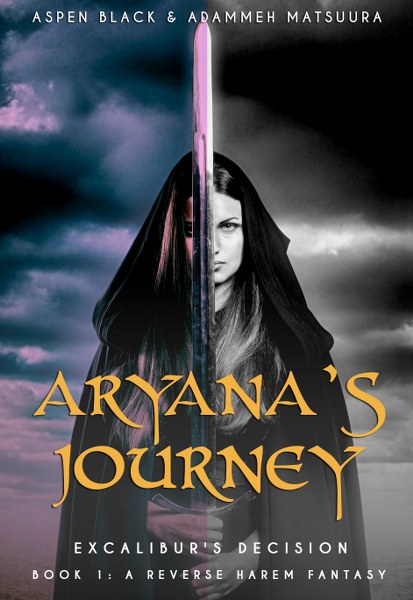 In the twenty third century the gateways were opened by Merlin between Earth and The Realm, the home of the Fae, in search of the next King Arthur. Magic flooded the Earth, overtaking most of technology. Now, hundreds of years later, Fae have learned to coexist peacefully with humans and Merlin still searches the Earth with Excalibur.

Aryana works in the Mayor’s kennels overnight. She’s been content with her life up until the moment her eyes meet those of Merlin’s. Everything changes during the Star Festival. Her life becomes a whirlwind as she travels to Avalon with her Knights of the Round Table, her Wizard and a new ally that no one was ever expecting.

It’s up to Aryana to help stop an ancient evil that dwells deep within The Realm. She will have to learn to fight for herself with the help of Excalibur to aid in the upcoming war.

This is a slow to medium burn fantasy reverse harem why choose novel.

Can you, for those who don't know you already, tell something about yourself and how you became an
author?
--How I became an author? That question always makes me laugh a little. I think anyone who picks up a pen (or types out on the computer) a story can be called an author. I was in fourth grade when I really developed a love of writing. I remember an essay where we had to write about what we wanted to do when we go to college. I wrote I was going to go to Harvard and become a writer! Of course, that didn’t happen. When I graduated high school, because my family needed me, I went straight to the work force and stopped writing for years. I went to community school in my mid-twenties, got a degree, a little bit of a better paying job, but it wasn’t until this past year that I picked up writing again.
I kept telling myself that I’d find time to write when I wasn’t so busy, or I had a better job. News flash to myself: It wasn’t going to happen unless I made it happen. So, I picked up that pen and got to writing. Ghost Revelations took about five months overall to finish. It was an idea I had for years that brewed in my head. Now, when I made it into a reverse harem novel? That idea came as I was writing it. I always got so mad at a heroine who was in love with different guys but ultimately had to choose one. How was that fair to her or the guys? It wasn’t!
I think I got off topic…I digress. I love writing, it’s my passion. Writing again, after so many years, has really helped me become happy again. It’s helped fight off my depression (which has been really bad), so much better than all the medications I’ve had to take for it.

What are some of your pet peeves?
--Pet peeves. I really only have a few. The biggest one is cracking knuckles. I CAN’T stand that noise. It literally makes me cringe. Another pet peeve is when someone says they’ll have something done at a certain time or date, and they wait until the very last moment to do it.

What do you do to unwind and relax?
--This might sound weird, but, I write or read. I can write for hours but only get a few things down and still be relaxed as if I had been reading that whole time. I don’t watch cable; I have Netflix on while I work.
Oh! It’s rare nowadays, but I also love to create little creatures with polymer clay or burn wood designs.

Describe yourself in 5 words or less!
--Awkward introvert, kooky, and awkward.

What is something unique/quirky about you?

---I know that I have a quirk about collecting all things Panda that I can. I also have this weird habit that when I have an ‘all day writing’ day, I have to have lemonade or I can’t start.


--- Ok, it’s time to be honest here. My spirit animal has, and always will be, a panda. I am OBSESSED with collecting pandas. I have a half sleeve of panda tattoos on my left arm. They are fuzzy, soft, cuddle, chubby, extreme klutzes. Just like me!