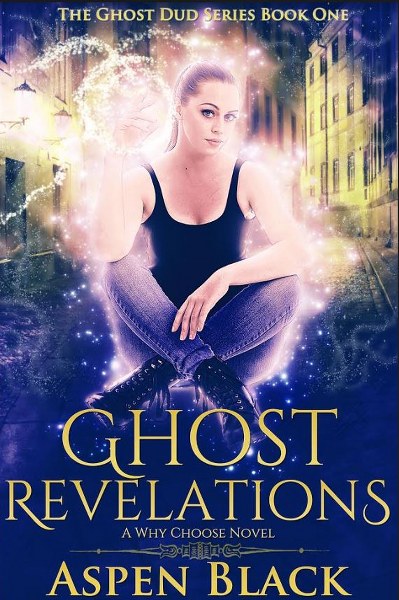 I was always told growing up in my family, surrounded by magic, that I was a dud. I had no power except the ability to talk to ghosts. It never bothered me because I enjoyed my job as a bartender at my Uncle's bar that caters to the supernatural community. I spend my nights working and getting to flirt with my crush.

Then one night, my life turned upside down. Someone was murdered right around the corner and suddenly a hot wizard detective with a perfect bubble butt from MEPA, The Magical Entity Protection Agency, swooped in and asked for my help with the victims' ghosts. Working with the detective soon leads to a race to stop a killer who is bent on exposing the supernatural community to humans with more deaths.

Join Victoria on her journey as she works to stop an evil being with the help from her crush Akira the werewolf, Lucian the wizard, and her ex-boyfriend Shax.

This is a reverse harem medium to fast burn book or a why choose novel.

F/M/M/M. This does include M/M heavy elements.

What can we expect from you in the future?
---You can expect so much! I’m a little like the energizer bunny when it comes to writing. I have the two series right now that I’ll have published and finished by the end of 2020. I also have a contemporary paranormal series based in a town that I’ll have written by the end of 2020, but won’t probably be published until 2021. That idea was something I had started even before Ghost Revelations but it’s taken a while to develop the story.
I have a stand-alone fantasy I’m writing that’s based vaguely on the idea of Jack and the Giant Beanstalk. That book is looking to be at least four hundred or more pages.
I also have a few note books full of ideas that I just need to develop. I have an idea that has the first few pages already written for a twist on a zombie apocalypse. The only ideas that I struggle with are Christmas stories. I’d love to write a few short stories for next Christmas.
I’m really hoping that I can attend a few writer/reader conferences as an author. That would be a DREAM.

Do your characters seem to hijack the story or do you feel like you have the reigns of the story? Convince us why you feel your book is a must read.
--My characters completely hijack the story. I have no reigns whatsoever. I’ll go in with an idea but they’ll take over and it’ll come out totally different. You should really read my books or my characters will be sad!

What did you edit out of this book?
---For Ghost Revelations, I actually took out a few chapters that just didn’t work with the overall story. I did add an extra chapter back in though. I saved the chapters I took out to see if I could use in the future.

What is your writing process? For instance do you do an outline first? Do you do the chapters first?
----I’m what’s known as a ‘pantser’. For the most part, I’ll write down an idea, do a vague outline of what I want the story to work off of, and then I let my fingers fly! I do write in chapters, I can’t write outside of chapters, it has to go in order.

Do you prefer to write in silence or with noise? Why?
--I can do both, but I prefer to have music going on in the background. If it’s too quiet, I can sometimes get bored and unfocused. But if there’s a tv going? I’ll get so distracted I stop writing altogether.
How long on average does it take you to write a book?
--My first book, Ghost Revelations, took about five months. Aryana’s Journey only took two. I’m thinking the second book in the Ghost Dud Series is going to take about two months as well I started earlier this month but, I’m only about half way done with it.

Do you believe in writer’s block?
---Oh, yes. It is there! I’ve run into it a few times. The longest was about two weeks and it was HORRIBLE! Not being able to think of anything to write felt like I was missing a limb.