Most families have a favorite recipe or two, handed down through generations. The Holloway women are a little different. Emma Holloway, like her grandmother before her, bakes wishes into her delicious cupcakes, granting the recipient comfort, sweet dreams, or any number of good things. It’s a strange gift, but it brings only happiness. Until gorgeous, smooth-talking newcomer Hunter Kane strolls into her shop, Fairy Cakes—and Emma makes the mistake of selling him not one, but three Sweet Success cupcakes.


Hunter, it turns out, is opening a fancy new restaurant and bakery right on the waterfront—Emma’s competition. To make matters worse, the town committee has decided to split the upcoming summer festival contract between the two, forcing Emma to work with her nemesis. But she can’t afford to split her profits. The solution: create a recipe that will make Hunter leave town permanently.
The Holloway charms are powerful. But there are other kinds of magic in the world—like red-hot first kisses, secret glances, and the feeling that comes with falling truly, madly, inconveniently
in love . . .

“We should probably get back,” she said quietly.
“Probably.” Hunter didn’t move. He still held the wild rose in one hand, his other hanging loose at his side, fingers itching to touch her. She took a shaky breath. Their eyes locked.
With infinite slowness, he closed the gap between them and reached his arm around her waist, settling his hand on her lower back. He felt as though he were in a trance, like everything else faded around them and the only thing he could see clearly was her. She was warm and soft, and touching her felt right. A thrill shot through him when she didn’t resist. He pulled her body flush against his and she exhaled on a tiny sigh.
Emma tilted her head back, her eyes half closed, her breathing shallow. The scent of chocolate and honeysuckle surrounded him and the urge to taste her was so strong, he almost groaned out loud. The rose fell to the ground, forgotten, as he wrapped both arms around her and lowered his head. Her eyes fluttered shut. When he lowered his lips to hers, she grabbed fistfuls of his shirt, pulling him closer. For the briefest, most blissful of moments she brushed her lips against his. The whisper-soft touch of her mouth on his was intoxicating. He was drowning and he never wanted to come up for air. This was heaven.

Tara Sheets is an award-winning author of contemporary romance and women's fiction. Her debut novel, Don't Call Me Cupcake, won the 2016 Golden Heart® award sponsored by Romance Writers of America. Tara began her career as an author in the Pacific Northwest, inspired by the rain and the misty mountains and the rivers of Starbucks coffee. She now lives in the warm, wonderful South where she can stand outside with no coat on, and she finds that pretty inspiring too. When not writing, Tara enjoys life with her book-loving family and a book-eating dog named Merlin. 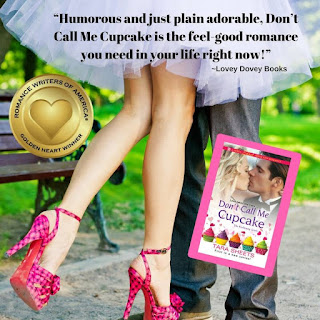