Isaac Comett: My Life as a Shard Knight by R.T. Driver Book Tour and Giveaway :) 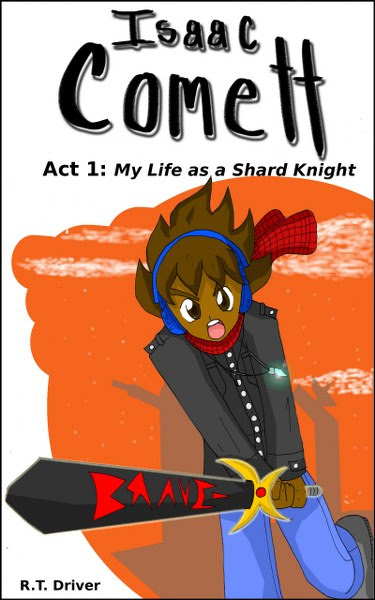 Isaac Comett: My Life as a Shard Knight
by R.T. Driver
Genre: YA SciFi Fantasy

It's 2003, and the coldest of seasons has arrived, filled with monsters, robots and dead beat dads.

Isaac believed his only job was to blow off homework, play video games and get a date with his crush, the cunning local delinquent June Farnell; not defend his hometown from vicious space pirates!

On one Fall afternoon, he and his friends are attacked by aliens seeking the Memorite Shards; crystals that grant the user superpowers. His comfortable life with his mom and younger brother is gone, and he's forced to fight a secret war against the merciless Cyborg, Straum. Even when they gain the shard's protection, more questions about their unyielding attackers arise, and their only source for answers is another shady alien, and fellow Memorite user, Chenzo.

Lying to his mom and swinging a sword become Isaac's new life as he, June and the others train to become Shard Knights; defenders of the Memorite. Unfortunately for him, he's the team's weakest link, and surviving the one year bonding period to the crystal seems less likely with each battle. And what's worse, his estranged father Zack is back in town after a year long hiatus, ready to "set things right"...again.

Will Isaac defeat Straum's army of mechanical warriors, save his family and live long enough to put on his graduation cap, or will Comett burn out like so many others before him?

Join Isaac, June, the slick talking Austin, his brainy beauty girlfriend Emma, and the comic-book obsessed Fiora in this epic sci-fi rumble and see what being a hero is REALLY all about!

-Realistic characters of different races and backgrounds that deal with true to life issues, such as school drama, dating, divorced parents and neglect.

-No lengthy, needless descriptions make for a satisfying read.

-Immersive, over-the-top action influenced by video games, anime, and science fiction movies while seasoned with emotional encounters throughout. Feel like a part of a super hero team!

-Edited for quality and easy navigation!

"The pace is perfect, the reading is very comfortable, and the material is appropriate for all ages. Although this book is geared towards...young adults, I...couldn't put it down! I definitely recommend this suspenseful book to everyone who enjoys a good read." -Mrs. Wygant


"Comets may shine bright, but they all burn out eventually. How long will you last, I wonder?" 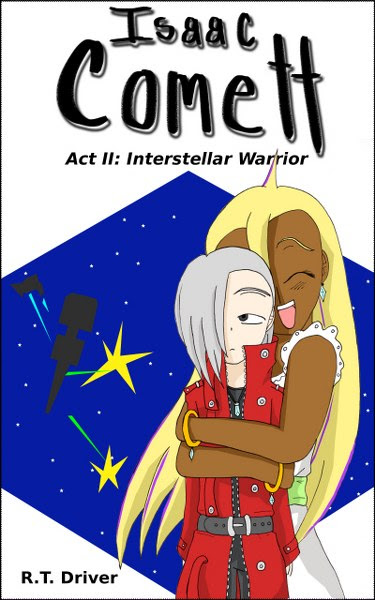 Isaac, June, Austin and the others are halfway through their bonding period with the powerful Memorite Crystals, but their adventure is far from over.

Fighting Androids and Seekers has become second nature to the team, but their unity is put to the test when personal feelings from a bad breakup get in the way of being heroes. With graduation only weeks away, their parents growing suspicious of their activities, and two of the warriors ready to rip each other's heads off, it seems like things couldn't get worse...

Isaac and the others depart for the world of Rudesia to Recall the remaining Shards. There's no rest for the tired friends, as not only do they have a rich, stuck-up Count on their tails, but complications from a new, less welcome addition to their group.

The chance for an early freedom and end to the Memorite War has come! Will Isaac's emotional wounds heal in time, or will they lead to a deathblow for the Shard Knights?

-Picks up after My Life as a Shard Knight

-Addresses issues of change, what makes a healthy relationship, and the consequences of greed and violence

Scene: During an attempt to rescue their mentor Chenzo's daughter on Vara 2, Isaac and Emma are ambushed by Fullon Androids.

Since we defeated Captain Straum we had been diligent with our training. We didn't miss a single day (except for that one week we took a field trip to D.C), always keeping our battle skills nice and sharp. That said, there are some things that you just can't prepare for using wooden dummies and one on one sparring matches; in that case, it was an army of tricked-out space pirates.
"Bring the meat sacks down!" echoed one.
Our first move was going to make or break our survival, and Emma took a gamble, leaving it to me. She fell to her knees as I yelled, stretching my palm out. A squall of golden flames materialized and rippled towards the firing squad that had boxed us in. The shots they managed to let off faded into nothingness as the wave overcame them. They screeched as they were tossed and burned.
Emma rose to her feet and turned to her right, releasing a series of shots at one particularly menacing Fullon. It looked like it had a cage for a head with red circular eyes sitting in a pool of black gears and circuits. Out of its table-sized belt it drew unsheathed a massive pole. With a flick of a switch the weapon was engulfed in a blanket of electricity.
"Isaac!" shouted Emma.
The oversized microwave took a swing, and if it weren't for her stone she would have been a smoking red splatter. She let off more shots, but her bolts failed to slow the mass of junk.
"I'm on it!" I yelled as I sent a beeping combatant to the ground.
"Dude!" crackled Austin.
"What is it?!" I yelled. My legs propelled me towards the giant Fullon. I jumped into the air like a basketball player going for a slam dunk.
"If it's just as bad there as it is over here, you'd better be keeping my girl safe!" he warned.
I stabbed the robot hard. It let something slip out of the speakers by its mouth. I didn't need a translator to know it was computer-talk for something crude.
"Working on it!"
Emma sidestepped another swing and fired a shot that shattered one of the machine's eyes. I hung on as it stumbled around knocking out its smaller teammates.
"Emma! Is he doing a good job? Be honest! I can threaten him if it will help!"
I swung Brave with all my might, knocking the robot's head off, but it still stood on its two, car-sized feet.
"He's starting to put your skills to shame, baby," she said. She fired an arrow at a joint in its knee. It toppled to the ground, snapping the chains keeping its leg together.
"What? I can't let that happen. Over and out. And good work, Comett!" he said angrily.
Igniting Brave with the gold power from my hands, I thrust my sword into the Fullon's back. The giant let out a cloud of black smoke before going still.
"Thanks Em." I panted as I leapt off the beast. "I didn't think our friend would shut up."
"You just have to know how to work him." She said.
As the two of us sped under iron archways towards our meeting point, we could hear loud explosions off in the distance. We knew it couldn't have meant anything good.
The Little Scare flew overhead. Before Emma's warning that another squad of Fullon had shown up, the turrets mounted down our ship's long tail unloaded their contents. Beams of light pulverized the androids, sending twitching arms and legs everywhere.
We waved up at the ship as it zipped off for a second pass, but Chenzo's path wasn't clear that time. Circular pods with moving bodies inside them rose into the air far away. The strange things turned out to be other ships, but I would never had known if it weren't for the translucent green frame that formed wings and a nose once they reached their target height. All we could do was watch as half a dozen of them chased our backup away with a hailstorm of glowing bullets.
"He's tough." I said to Emma. "It'll take more than that to bring a mental case like him down."
"Right." she said with a small nod.
A bridge of cement and steel provided a path above a moat that surrounded the skyscraper. The bronze structure shined in the sun's scorching light. A tall set of grated stairs led up to the entrance, which was guarded by a team of ready-to-rumble Fullon. Spilling over the open cliff and down into the smelly muck bellow were long tubes and hoses that released a never ending river of brown sewage.
The moment the two of us set foot on the bridge, dozens of robots came crawling from over the guardrails. Like spiders, they scurried from over the sides on all fours, using their sharp fingers as hooks. They all laughed sinisterly through radio static as they closed off both ends of the path.


"Right where we want you." beeped one. 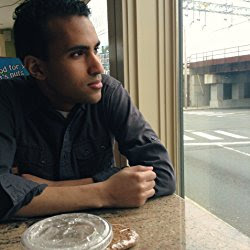 R.T. (Robert Treat) Driver was born in New Haven, CT in 1990, and grew up in the city of Milford with his hard-working mother and "too smart for his own good" brother. Throughout his teenage years he researched and flip flopped between dozens of ideal jobs. He eventually went to a Porter & Chester Institute for Electronics in 2009 where he learned the wonders of debt. After working as a Program Manager in a circuit board plant for years, he chose self employment to have more time for his wife and personal pursuits.

Ever since his exposure to Japanese Animation and author Christopher Wooding's Broken Sky, R.T. created many unused manuscripts that were better off not seeing the light of day. The first project he released was Isaac Comett: My Life as a Shard Knight in 2014, then re-released the series after heavy edits in 2017.

R.T. Currently lives in Branford, CT with his supportive wife and her army of stuffed animals.