The Mourner's Cradle: A Widow's Journey by Tommy B. Smith Book Tour and Giveaway :) 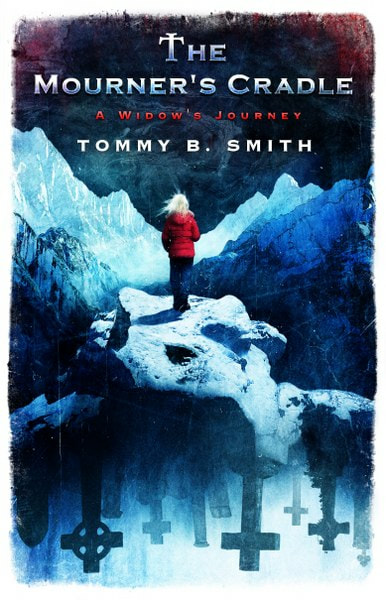 The Mourner's Cradle: A Widow's Journey
by Tommy B. Smith
Genre: Horror

The tale of a widow's harrowing journey through grief and peril into the cold remnants of a dead world.

Damon Sharpe had in part found victory, he believed, in his battle to unearth a truth obscured by time. By autumn, he was dead, leaving to his wife Anne a house of unfulfilled wishes, remnants, and the key to the enigma of his obsession, the Mourner’s Cradle.

A journey through grief and peril delivers Anne Sharpe from her home in St. Charles to the faraway skeletons of a long-dead civilization where she will find the desperate answers she seeks…or die trying.

The days and hours became lost in a blur. Now she stood in silence in front of a polished wooden casket. It might be the first time any of them had noticed Anne’s wispy form, her light-complexioned features with pale blond hair that fell straight down on each side, and her brown eyes. The others who filled the room spoke in hushed tones. Anne heard soft steps approaching from behind. A hand touched her shoulder. She pulled away from it. “I’m sorry, dear,” the person, an elderly woman with curled white hair, said. “Sorry for what?” Anne replied. She saw no value in artificial kindness. She certainly didn’t owe it to anyone. She didn’t even know the woman who stood in front of her or most of the rest of these people, and they never knew her. They couldn’t know how she felt, what she and her husband had shared, or what remained now that he was gone. The only things left of Damon Sharpe, other than the ring she wore and his still form in that casket, were inside of her and inside that house they had shared, though its contents had become almost worthless to her. The house might as well be empty. In a way, it was. “Anne,” a soft voice said to her from nearby, “if there is anything I can do, please let me know.” Anne turned and fixed the brown-haired woman in the gray dress with a flat stare. The woman swallowed, taking a step back. “Anne, it’s me,” she said. “Tabby Reinhart. I know we haven’t talked in a while, but—” “Miss Sharpe?” another voice broke in, the voice of a man. The tall man in the dark blue suit stood just outside of Anne’s peripheral vision, to her left and behind, as if he meant to force Anne to turn around to face him. She wouldn’t give him that satisfaction. She continued to face the casket. “My condolences,” the man’s low voice spoke. “Why are you here?” Anne asked. “Why, Miss Sharpe, I’ve come to pay my respects.” “There is nothing respectful about your visit here. We both know that.” The man shifted. She could imagine the amused look that crossed his face, even if she didn’t look at him. “Miss Sharpe—” “Mrs. Sharpe.” A cough. “Very well, Mrs. Sharpe, my name is Brock Keller. Your husband and I—” “I know who you are,” Anne said, “and I know why you’re here. You’re here to have one last laugh before they lower my husband into the ground.” She faced the black-haired man in the blue suit and locked him full in her stare. “You have no right to be here.” Keller appeared surprised. The surprise was feigned, Anne knew. No matter what he pretended or said to the contrary, Keller knew the hardship he had inflicted. “You did your best to destroy everything my husband worked for,” Anne said to him. “No, Mrs. Sharpe, you have it wrong,” Keller said. “He was my husband,” she said. “You think I don’t know what went on his life? You think I don’t know about the things you’ve done? You’re a liar, Keller.” Keller looked around, becoming nervous. People were staring. Tabby Reinhart, still standing near, took another step back. “Get out of here,” Anne said to Keller. “You are not welcome here. Get out.” “Don’t you think you’re overreacting?” he asked. “Get out!” Her hand twisted into a fist. She swung and struck him right in the face. Keller’s head jerked back. His face flushed crimson. He grabbed her arms and she fought him, screaming. “GET OUT! GET OUT!” Arms grabbed Keller from behind and pulled him back. Tabby rushed between them, pleading quietly with Anne. Anne shoved her away. More people pulled Anne back, but she shouted and fought against them. Keller yanked his arms free of those around him and strode for the door. At the door, he took a look back, his jaw clenched. His eyes burned with anger. “Dear, please,” the older woman urged Anne. “It’s all right. He’s gone.” Anne turned her eyes toward the door where Keller stood a moment before, saw the truth of the old woman’s words, and forced her mouth shut. She pushed her shaking hands down to her sides. “Will you be all right?” another voice asked her from out of eyesight. She didn’t know who had spoken and didn’t care. She took a deep breath. With this group of people around her, she felt like she was suffocating. “Please,” she said through her teeth. “I just need to be alone.” The group hesitated. After a moment, someone stepped away. The rest soon followed, leaving Anne again to stand in front of her husband’s coffin, tears on her face, emotion pouring from her fractured life. The people standing behind her still wore those masks of concern, she imagined. She couldn’t turn to face them. Not now, in her moment of weakness. They didn’t deserve to witness this, her fragility.  Besides, they wouldn’t understand. It wasn’t sadness that possessed her and hardened her face against the tears that fell. It was hatred. 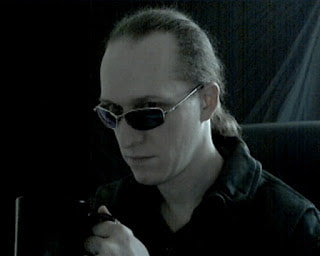 Tommy B. Smith is a writer of dark fiction, author of The Mourner's Cradle, Poisonous, and the short story collection Pieces of Chaos, as well as works appearing in numerous magazines and anthologies throughout the years. His presence currently infests Fort Smith, Arkansas, where he resides with his wife and cats.

Do you read yourself and if so what is your favorite genre?
I read every day. My wife bought me a Kindle Paperwhite a couple of years back and that’s a nice thing to have. It’s easy on the eyes, allows me to read in the dark, and to carry many digital titles in a single device.
I still read paperback books as well, and sometimes I enjoy the compact collectible hardbacks. Not the gigantic hardback tomes that weigh fifty pounds, mind you.
Naturally, I enjoy horror, but I also read fantasy and don’t mind exploring the full realm of speculative fiction. Literary fiction and non-fiction as well, as long as it’s of a subject that appeals to me. It’s typical for me to read outside my genre as an author.
The only genre that doesn’t appeal to me is romance. I don’t mind a story having romantic elements, but a pure romance novel isn’t something I’ll be able to maintain interest in. That’s just my taste.
Some people are very narrow in their reading habits. I once had someone tell me he only read time-travel stories. To me, that means missing out on a broad spectrum of ideas and possibilities. Then again, though, it’s a matter of taste, and we all have our own for our own reasons.
What have I read lately? Mostly horror, as it turns out. I finished Bring Her Back by Jeff Strand not long ago, one of the more entertaining stories I happened across in the past year. Other recent reads include A Season in Hell by Kenneth W. Cain, The Unfleshed: Tale of the Autopsic Bride by Lisa Vasquez, and A Bagful of Dragon by Sakina Murdock.

Pen or type writer or computer?
Computers make things easier. I remember a time when I regularly wrote stories in notebooks. Some authors I know still do.
I had an issue with strangers approaching and interrupting me to ask what I was writing, or even standing up close and staring over my shoulder. An odd thing, trying to write in public, although I hear about many others authors doing it, but I find it distracting. It’s proven better for me to withdraw into my writing shelter to get the job done.
Those authors you hear about who are typing up their newest works-in-progress in your local Starbucks? They aren’t me.
I do have an occasional habit of writing stories on hotel stationary and in guestbooks. Writing exercises, if nothing else, but perhaps a quick tale to occupy someone’s time.
Typing is quick and easy, however. I’ve used computers since well before the reign of the internet, and value them as useful tools of the modern world.