Syrina awakens after a devastating plane crash only to find herself in the clutches of the Cuban government. Worse still, Brant is injured and on the verge of death. Her Bracadyte blood is his only chance for survival, even though it means bonding with him for life...

Former Marine, Brant Henderson despises weakness in any form, yet that is exactly the position he finds himself in. He's injured, bleeding out, and on the verge of certain death. Until the blood of a beautiful, forbidden Bracadyte enters his veins. Her life force holds the power to heal his body, even when he's in danger of losing his heart...

Somewhere in the far reaches of Brant’s inebriated mind, he knew he shouldn’t put his hands on Syrina. He was playing with fire—a fire that even now threatened to burn him alive. Syrina was more than just some female to take to bed. She was an Arkadian warrior with the power of a Bracadyte surging through her veins. My blood is in her veins too, Brant thought with more than a little possessiveness. Mine. His gaze consumed her long, shapely back, traveled down to her equally long, shapely legs before coming to rest on the most incredible ass he’d ever seen. He stepped in close, rested his foot between her ankles, and forced her feet apart. A soft intake of breath was the only sound Syrina made.
Without touching her, Brant leaned in and rested his mouth next to her ear. “Do you have any idea how incredibly alluring you are?” Her breath shuddered out, and she moved her head from side to side. “No?” Brant continued, coaxing her feet farther apart. “How about now?” He eased forward enough that his jean-clad erection rested lightly against her ass. Syrina moaned, arching her back enough to push against him. “No. Don’t move,” Brant rasped, pulling back slightly. He could see and feel the passion coursing through her body, if the trembling in her legs were any indication. To know that he affected her as much as she affected him sent even more blood rushing into his shaft. He’d never been so hard. Not even in his teenage years. Brant knew in that moment that he would likely regret his promise to leave his pants on, but promise her, he did. Son of a bitch. 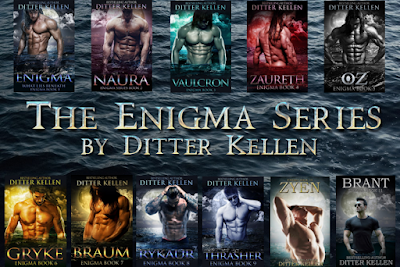 Ditter Kellen is the bestselling author of the Enigma Series. To say she's addicted to reading is an understatement. Her eBook reader is an extension of her and holds many of her fantasies and secrets. It's filled with hundreds of jaw-dropping characters who keep her entertained on a daily basis.

Ditter's love of suspense and outrageous imagination have conspired together to bring her where she is today...sitting in front of her computer allowing them free rein. Writing is her passion, what she was born to do. I hope you will enjoy reading her stories as much as she loves spinning them.


Ditter resides in Florida with her husband and many unique farm animals. She adores French fries and her phone is permanently attached to her ear.