Ann Swann was born in the small West Texas town of Lamesa. She grew up much like Stevie-girl in The Phantoms series, though she never got up the nerve to enter the haunted house.

Ann has done everything from answering 911 Emergency calls to teaching elementary school. She lives in Texas with her husband, Dude, a rescue cat named Oscar, and a part-time box turtle named Piggy.

When she’s not writing, Ann is reading. Her to-be-read list has grown so large it has taken on a life of its own. She calls it Herman. 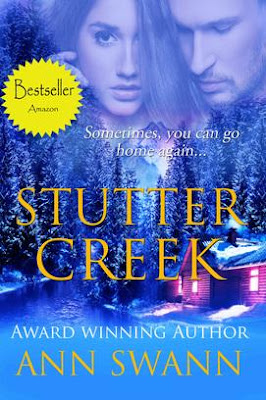 Stutter Creek (book one) is a romance, brilliantly hidden within a suspense-filled tale of a psychotic serial killer with a chip on his shoulder. It is also a classic tale of young love lost, and a life of regrettable what-ifs.

Mandy was on her way to work the evening shift at the Waterhouse Bar & Grill when she spied a small boy standing beside the road, alone.

The setting sun made the trees appear as black-paper cutouts in a landscape collage.
After checking her mirrors to make sure no one was behind her, Mandy pressed the button to lower the passenger-side window. It was almost all the way down when a man yanked open the door and exploded into her world like a tornado into a trailer park.  Her hand flew to the gearshift, but she couldn’t engage it.  Even as her flight instinct kicked in, part of her mind was telling her this was almost certainly the same strange guy who had requested her section at the restaurant the night before.  His eyes had seemed to follow her all around the crowded dining room, and his oily stench had made him stand out like a spot of mold on white linen.
Mandy drew in breath to scream, her hand scrambling across the console for her phone or the gearshift, whichever came first, but he was too fast.  With lightning speed, he dove across the seat and slapped a rectangle of duct tape across her mouth.
He buried his free hand knuckle deep in the thick blonde braid at the base of her skull even as his other hand slid down to her windpipe and began to squeeze.
Mandy’s fight instinct kicked in then, and she whipped her head back and forth in an effort to dislodge his hands. His stench, and the oily filth of his unkempt hair, was sickening. She clawed at his eyes, ripped at his skin, but it was no use.  The psycho laughed and simply leaned his head back out of her reach.
That’s when Mandy began to claw at her own face, attempting to scratch the silver tape off her mouth. It didn’t matter. There was no one around to hear her scream even if she could have gotten it off.
Mandy wasn’t a quitter.  She did her best to get her feet out from under the steering column to try and kick him off. But he was pressing down on her with his entire weight.
She was trapped.
Calmly, the psycho took one hand off her throat, doubled up his fist, and hit her so hard the back of her skull struck the driver’s side window with an audible whap!
Then he went back to her throat. Mandy’s grip on reality began to loosen.  Tiny strobes flashed inside her skull.
He squeezed even harder, the tips of his fingers disappearing into her flesh.
As her world began to grow dark, Mandy recalled how as a small girl she had worried about running out of air, because if you couldn’t see something, how did you know it was there?
She had begged her mom to buy several packages of colorful balloons which she had blown up and stored in her bedroom.
Unfortunately, her older sister, Kami, couldn’t let a good thing like that go unnoticed.
She had waited until Mandy was out, then she’d tied all the balloons together and attached them to the stop sign on the corner.
Mandy had felt so humiliated when she came home, she’d wanted to get them down and put them back in her room, but she couldn’t bring herself to do it. She would have let herself run out of air before giving her sister that satisfaction.
The balloon bouquet had wilted quickly in the hot New Mexico sun.


Now, Mandy's last coherent thought—as the fireworks behind her eyelids exploded in the grand finale—was of those wilting, multicolored balloons.