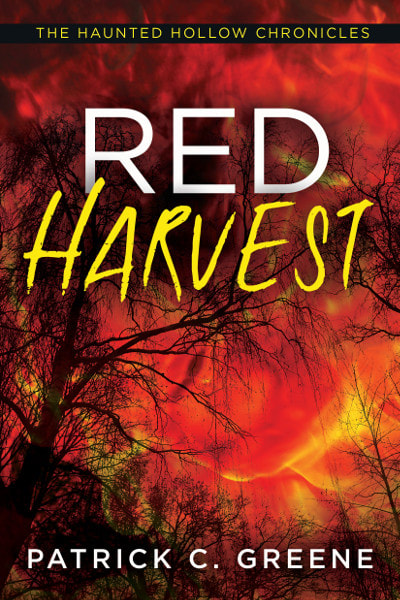 Red Harvest
Every year at harvest time, something strange and wonderful happens in the sleepy farm community of Ember Hollow. It comes alive. Truckloads of pumpkins are sent off to be carved into lanterns. Children scramble to create the creepiest, scariest costumes. Parents stock up on candy and prepare for the town’s celebrated Pumpkin Parade. And then there is Devil’s Night . . .

But this year, something is different. Some of the citizens are experiencing dark, disturbing visions. Others are beginning to wonder if they’re losing their minds, or maybe their souls. One newly sober singer with the voice of a fallen angel is tempted to make a deal that will seal his fate. And one very odd boy is kept locked in a shed by his family—for reasons too horrible to imagine . . .

Whatever is happening to this town, they’re going to make it through this Halloween. Even if it kills them . . .

“Trick or treat! Rotten meat! That is what we want to eat!” One of the troupe of tweens was out of harmony. “Hm.” Lola, costumed in a short leather nun’s habit, smiled and saluted the kids with her wine glass. She was decidedly not mortified by this variation of the traditional rhyme, and only mildly amused, more interested in the TV party a few rooms away. “Well, no rotten meat I’m afraid, but I think I still have a few…” She twisted almost sideways and presented a near-empty candy bowl from just inside, dumping the last of the treats into the bags and buckets. “Here you go, kiddies!” Lola ignored the disappointed expressions the kids cast at her and at one another, her bleary gaze drawn to the figure standing across the street, just outside a vague circle of street light. The figure, wearing an odd costume of rainbow fright wig, Lone Ranger–style eye mask, and an oversized brown raincoat, wasn’t moving, except for his shoulders, which rose and fell as if from suppressed laughter. He hunched over and covered his mouth with both hands, like a toddler who had just stolen a cookie. Did he think she couldn’t see him? How silly. “Is this all you got, lady?” asked the kid in the…whichever superhero wore black tights with green trim. She had stopped trying to keep up. “Um, well…” She looked inside again. “No more candy,” she said. “But how about this for your chaperone?” From the four canisters of silly string beside the candy bowl—in the event of a prank war—she held one over the heads of the children, to offer it to the man on the street. But he was gone. “Where’s your grown-up?” she asked. The kids turned to see what she meant. “What grown-up? We’re old enough to be without,” explained a rubber-worm-infested zombie, quite indignantly. Her wine glass was empty. She didn’t care about the funny skulker anymore. “Okeydoke, then,” she said. “Have at it!” She tossed the silly string at the group, then half waved, half shooed, until they shuffled away. Before closing the door, she decided to blow out the jack-o’-lantern. Lola re-wined her glass and started back to the den to rejoin her friends in giving old horror movies the MST3K treatment. She was stopped by the doorbell. She stepped to the door, unsteady on her spike heels. “Sorry! All out! Happy Halloween!” She moved to walk away but stopped upon hearing a giggle—silly yet eerie—just outside the door. “Hey!” she shouted. “You better not be TPing our lawn out there!” The doorbell rang again. “Okay!” Lola grabbed a can of silly string. “I warned you!” She yanked open the door and poised the canister, finding only blowing leaves, on and all around the front stoop. She listened for the sound of giggling or leaves crunching under running feet, bracing for a good hearty “Boo!” as well. “Ding dong ditch,” she muttered. “Not even a flaming bag of doggy doo. Kids these days…” She closed the door—and felt the icy tingle of intuition. Something was very, very wrong. She turned fast. It was the man from across the street, now less than two feet away. He had entered through the rear kitchen door. The fright wig he was wearing, vaguely haloed by the hallway, did its job. From there down, it only got worse. His Lone Ranger–style mask framed eyes filled with something like joy—but more like hopeless insanity. His face was white, as if bleached. Then there was the blood. Streams of it ran down gaunt cheeks to cracked smiling lips from the staples that held the mask on. The figure raised a meat cleaver with a blade the size of a notebook. Lola’s heart skipped a beat, until she saw that the weapon was mere plastic—a toy. Lola smiled, issuing a relieved, “Whew!” “So funny, Greg.” She leaned forward to look more closely at him. “Where’s the ol’ ball and chain?” As she reached for his mask, the figure stepped back from her grasp. He lowered the cleaver and slid the toy plastic blade—merely an improvised sheath—off of a very shiny, very real butcher knife blade. The oversized trick-or-treater displayed the implement. “Oh, my God, Greg.” Lola rolled her eyes and raised both middle fingers. The trickster slashed the knife in a sideways arc, severing the fingers. She was too breathless to scream, trying to reconcile the sight of her shortened digits and angry that Greg had taken his little joke this far. Not-Greg squatted to gather the fingers and drop them into his treat bag. Trying to back away from her own ruined hand, Lola fell like a toddler onto her rump, sucking breath for a scream she would never have time to release.

Patrick C. Greene is a lifelong horror fan who lives in the mountains of western North Carolina. He is the author of the novels Progeny and The Crimson Calling, as well as numerous short stories featured in collections and anthologies.